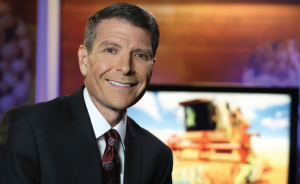 Michael Danna, director of public relations for the Louisiana Farm Bureau Federation and host of the organization’s long-running agricultural television program “This Week in Louisiana Agriculture” died March 6, 2015, in Baton Rouge. He was 54. In June 1985, Mike became the editor of “The Louisiana Farm Bureau News,” the official publication of the Louisiana Farm Bureau Federation. It was there Mike was introduced to the organization’s long-running TV program “This Week in Louisiana Agriculture,” or TWILA as it was known, created by Regnal Wallace. Mike would report for the show for the next 12 years, after which he was named PR director for the Farm Bureau and anchor of TWILA following Wallace’s retirement in 1997. In 2010, Mike’s report, “Katrina: Five Years Later,” won him a Telly Award for best news reporting by an independent television program. In addition to his television reporting, Mike was a contributing writer to several news and farm publications. Mike received numerous awards through the years and will be inducted into the LSU Manship School of Mass Communications Hall of Fame this fall. Mike is a 2004 graduate of the LSU AgCenter’s Agricultural Leadership Development Program.