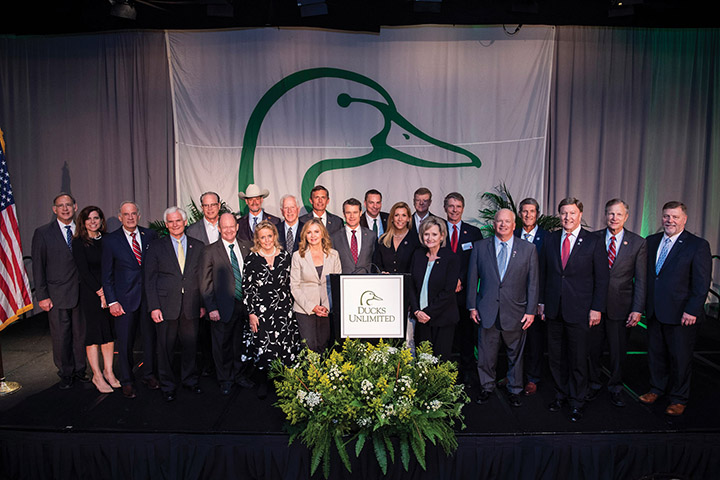 Following a two-year break due to the COVID-19 pandemic, Ducks Unlimited (DU) hosted the annual Capitol Hill Dinner and Auction for the first time since 2019. With more than 500 total guests in attendance, including Biden Administration officials, congressional staff, DU leadership and more than 40 bipartisan members of Congress, wetlands conservation was once again the focus of government leaders from across the United States.

“After a few years off, it was wonderful to gather again in the nation’s capital to celebrate wetlands conservation,” said DU CEO Adam Putnam. “DU is incredibly fortunate to have such great friends in Congress on both sides of the aisle who prioritize the conservation of waterfowl habitat and the preservation of America’s cherished outdoor spaces. This event is testament to the hard work of our volunteers and emblematic of our continued success working with Congress to support critical programs, like NAWCA, that will ensure our grandchildren have the same opportunities to experience the outdoors that we enjoy today.”

The North American Wetlands Conservation Act (NAWCA) is a voluntary matching grant program that leverages non-federal and federal funds for wetland restoration. Since enactment in 1989, NAWCA has conserved more than 30 million acres and created an average of 7,500 new jobs annually. Every dollar spent by the federal government, on average, receives a $3 match from program partners like Ducks Unlimited. NAWCA is the nation’s most successful wetlands conservation program.

DU hosts the annual Capitol Hill Dinner and Auction every spring in our nation’s capital, welcoming Members of Congress from both sides of the aisle and leaders of the current presidential administration, including from the White House, U.S. Department of Agriculture and U.S. Department of the Interior.

For more information, visit www.ducks.org, and be sure to follow DU’s Twitter feed — @DUNews1937 — to get the most up-to-date news from Ducks Unlimited.

RiceTec, a global rice seed company, in partnership with U.S. rice farm — Whitaker Grain — brought SmartRice to market earlier this year on Amazon and has now expanded to be available through Shopify.

According to a recent press release, SmartRice is a rice product grown in a more sustainable method to reduce the use of agricultural resources and provide more grain to meet the world’s growing appetite.

“Today’s consumers are hungry for sustainability. They’re demanding more environmental common sense out of everything they buy — including the food they put on their tables and the food they feed their pets,” said Tim Williamson, RiceTec marketing director. “That’s precisely what SmartRice delivers.”

“Rice growing methods such as alternate wetting and drying irrigation and solar energy, along with other methods of conservation, allow us to save on natural resources, yield more rice and provide habitat to waterfowl,” said rice farmer Jim Whitaker.

The release said SmartRice has the smallest carbon footprint of all commercially grown rice, thanks to a higher photosynthetic rate and naturally occurring pest and disease tolerance, requiring less water, nitrogen and pesticides.

SmartRice is successfully selling on Amazon across the country and is now available through Shopify for $13.07 per 2-pound bag. Visit www.smartrice.com for the latest in sales information, farmer videos and additional details.

The Arkansas Department of Agriculture is now accepting scholarship applications from students majoring in agriculture or an agriculture-related field at one of the following universities:

→ The Uninversity of Arkansas System.

Applications will be accepted through June 1. Go to bit.ly/DeptofAgScholarship.

Scholarship recipients may receive up to $5,000 for the 2022-2023 academic year. Funding for the scholarships comes from civil penalties collected by the Arkansas Department of Agriculture.

Recipients must have a minimum 2.5 GPA. Selections are based on academmic achievements, character, leadership, career plans and financial need.

Questions regarding the scholarship program can be directed to Amy Lyman at amy.lyman@agriculture.arkansas.gov.

The following information was published by the California Rice Commission:

With a continued lack of sufficient rain and snow to replenish our state’s reservoirs, California’s drought means one thing: less water available for all.

This third year of drought in California will likely lead to an unprecedented agricultural season for farmers across the state, including communities in the Sacramento Valley where farming is a major part of their foundation.

Specific impacts on the rice planting season won’t be known until late May, at the earliest. Long-term drought impacts remain unclear.

“What is certain is this historic drought has made our rural rice farming communities and our wildlife more vulnerable,” remarked California Rice Commission President and CEO Tim Johnson. “Our rice mills, dryers and suppliers will undoubtedly feel the effects of the drought this season.”

With less water on the landscape, natural wildlife habitat is shrinking. The few inches of water used to sustain the nation’s second largest rice-producing state also acts as surrogate wetlands for millions of migratory birds along the Pacific Flyway. Nearly 230 wildlife species rely on Sacramento Valley Ricelands for their survival.

“With extreme drought conditions forcing extraordinary challenges for both the wildlife and our farming communities, it is clear that flooded rice fields in the Sacramento Valley are more critical to our environment and our economy than ever before,” said Johnson.

Pounds of crawfish are hard to pin down due to the lack of official reporting, but Sink believes producers average between 750-800 pounds per acre, or 6.75 million to 7.2 million pounds of crawfish.

Around 60% of Texas acres are dual-purpose flooded rice fields that provide habitat for crawfish farming until rice is planted. Those acres produce around 650 pounds of crawfish until they are shut down for rice planting.

Acres dedicated solely to crawfish produce 900-950 pounds per acre and can be harvested a month to six weeks longer than rice acres, Sink said.

Texas ranks No. 2 in crawfish production and remains far behind Louisiana. But he estimates Texas gained about as many acres as Louisiana lost this past year to economic hardship, hurricane damages and invasive apple snail infestations.

“Texas maybe gained 1%-3%, but we are still small apples compared to Louisiana,” he said.

Sink said the popularity of crawfish continues to grow.

A recent article by Aquaculture North America reported crawfish popularity hit a record high this season based on domestic and foreign demand from countries like China.

Three icons of Louisiana agriculture were recently inducted into the Louisiana Agriculture Hall of Distinction.

The Louisiana Agriculture Hall of Distinction is a joint effort of the LSU AgCenter, Louisiana Radio Network, Louisiana Farm Bureau Federation and Louisiana Department of Agriculture and Forestry.

It honors individuals who have made significant contributions to agriculture or agriculture-related industries. Previous inductees have represented farming, ranching, forestry, aquaculture, education and agribusiness.

To learn more about the Louisiana Agriculture Hall of Distinction, contact Eboni Register with the Louisiana Radio Network at eboni@louisianaradionetwork.com or 225-291-2727.