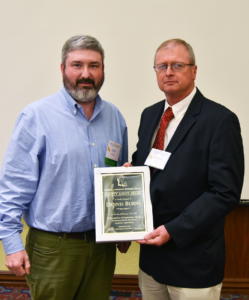 Also recognized was Dennis Burns, who received the County Agent of the Year award.

Burns serves Catahoula, Concordia and Tensas parishes, and he specializes in agricultural technology, including drones, irrigation and yield maps.

“That’s just a small list of things he is well known for,” says Hank Jones, LACA executive board secretary, who nominated Burns for the award.

Burns earned his bachelor’s degree in ag business from Louisiana State University and his master’s degree from the University of Tennessee at Martin. He was on a group that won the AgCenter Tipton Team Research Award in 2006 for his work on precision agriculture, and he was named the Precision Ag Researcher of the Year at the 2015 National Conservation Systems Cotton and Rice Conference. 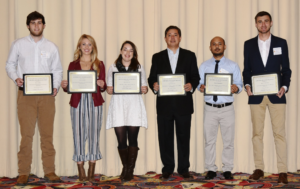 Louisiana Land Bank, ACA funded a LACA scholarship for a doctoral student majoring in agriculture. Megan Mulcahy, who grew up on a sugarcane farm near Pretoria, South Africa, received the $2,000 scholarship. She is currently working on her degree in entomology at LSU in Baton Rouge, where she has a 3.9 grade point average.

The recipient of a $2,000 Koch Agronomic Services-funded LACA doctoral scholarship was Jose Mite Caceres from Ecuador. He earned his Bachelor of Science in agronomy and economics from the Zamorano Pan American Agricultural University and a Master of Science  from LSU in weed science and agricultural economics. He is currently pursuing his doctorate in plant, environmental and soil sciences.

Ateet Maharjan received a $2,000 LACA master’s degree scholarship funded by Ray and Dorothy Young. Maharjan graduated with a bachelor’s degree from the University of Agriculture in Nepal. Currently, he is a graduate research assistant at LSU and is working on a master’s degree in plant pathology with a minor in experimental statistics. He has a 3.9 GPA.

Anna Coker, who is pursuing a Master of Science in plant, environmental and soil sciences, received a $2,000 LACA scholarship funded by Pest Management Enterprises (Dr. Grady and Barbara Coburn). Coker currently has a 3.4 GPA.

Bryan Ashley received a $2,000 LACA undergraduate scholarship funded by Belchim Crop Protection USA. Ashley graduated from Tallulah Academy Delta Christian School and is currently attending the University of Louisiana, Monroe, where he is majoring in agricultural business. He has a 3.2 GPA.

James Noah Harper received a $2,000 LACA undergraduate scholarship funded by UPL, Valent USA and Arysta LifeScience. While in high school, Harper also attended Delta Community College during 2016-17; Louisiana Tech in 2016-17; and the University of Monroe in 2015-17. Currently, he is a sophomore at LSU majoring in plant and soil systems. He has a 3.2 GPA.

The LSU AgCenter contributed to this article.