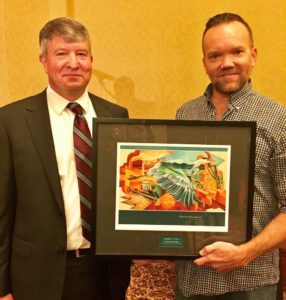 The California Rice Commission recently recognized a handful of individuals during its Circle of Life Reception in Sacramento, which is an annual opportunity to tell the industry’s story to key audiences.

The commission also recognized Kurt Richter, a Colusa County rice grower and producer of the Rice Radio podcast, and Matthew Sligar, a Richvale-area rice grower and the videographer behind Rice Farming TV, with Circle of Life awards.

The two were honored for their creativity and dedication telling the California rice story through social media.

Artist Franceska Gaméz was on hand with this year’s California rice painting, “Shared Abundance,” which will be the subject of a mural in downtown Sacramento.