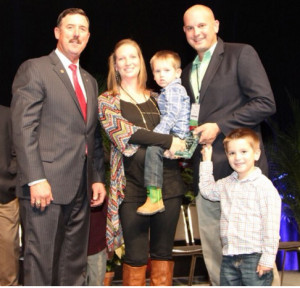 Gertson, a fifth-generation rice producer, set out on his own to farm with his cousin, Daniel.

Timothy is preparing to plant his first organic corn crop to meet the rising demand for the product.

He has worked years to improve the land he leases, repairing irrigation wells and canals and using technology to conserve water.

Lindy is a registered nurse, and both are involved in several community organizations, including the local Habitat for Humanity and the USA Rice Federation.

Timothy also is president of the Wharton County Farm Bureau.

Other finalists included Galen Franz, who grows rice near Victoria, and Marcus and Amy Halfmann of Garden City.

The Gertsons will now represent Texas at the national American Farm Bureau competition in January in Orlando.