Despite inclement weather across the region, attendance at the 2013 USA Rice Outlook Conference in St. Louis was outstanding. More than 600 rice farmers and industry affiliates attended the meeting to hear presentations and visit the trade show’s 50 exhibits.

To view these presentations, go to usarice.com, click on Meetings, 2013 USA Rice Outlook Conference and Presentations. In addition to the regular program, many individuals were honored at the Rice Awards Luncheon and are featured here in a pictorial display.

USA Rice Federation contributed information and photos for this article. Visit the website at www.usarice.com. 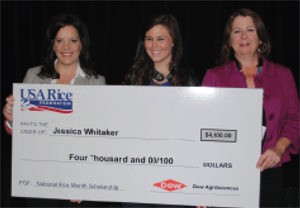 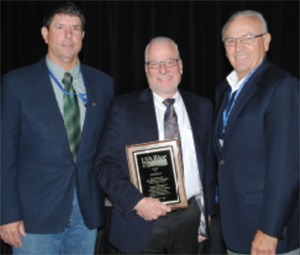 “It is the USA Rice Federation’s privilege to present this award to Dave White,” LaGrande says. “Dave worked very closely with the rice industry during his tenure as NRCS Chief. His vision and foresight led to the development and implementation of the Migratory Bird Habitat Initiative in several Mid-South and Gulf Coast states, including the five rice-producing states of Arkansas, Louisiana, Mississippi, Missouri and Texas.”

White helped to develop the program in response to the Gulf of Mexico oil spill, to provide habitat for millions of migratory birds whose annual habitat sites in the Gulf region had been damaged by the spill. The large majority of the program’s enrolled acres were rice fields. White also was instrumental in working closely with the California rice industry to develop and implement the Waterbird Habitat Enhancement Program. 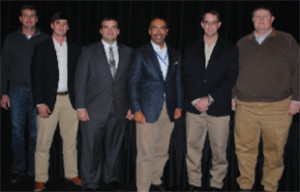 “The caliber of applicants made choosing this year’s class especially difficult and that’s a problem the rice industry likes to have,” says Marvin Cochran, Chairman of the Rice Foundation. Cochran went on to thank everyone who applied to the program and encouraged the crowd to reach out to those not selected this time to suggest they apply again to the program next year.

John Deere Company, RiceTec, Inc. and American Commodity Company are sponsors of the Rice Leadership Development Program through a grant to The Rice Foundation. The USA Rice Federation manages the program. 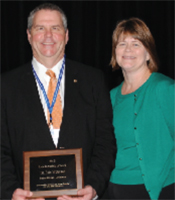 Dr. Eric Webster, who specializes in rice weed management research with the LSU AgCenter in Baton Rouge, is pictured with his wife Sarah. Dr. Webster was selected as the recipient of the 2013 Rice Industry Award.

Meryl Farr congratulates her father Elton Kennedy of Mer Rouge, La., on his having received the 2013 Rice Lifetime Achievement Award. Elton is a longtime farmer, whose business has evolved to include rice handling and milling. 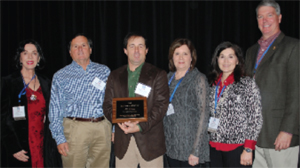 Rice Farmer of the Year Family

Joe Aguzzi – the 2013 Rice Farmer of the Year – was unable to attend the Rice Awards Luncheon because of bad weather. However, he was well represented by several members of his family who accepted the award on his behalf. From left: Rice Farming editor Carroll Smith, Ronnie Aguzzi, Michael Aguzzi, Brenda Aguzzi, Celia Manley and Scott Manley.

Joe Aguzzi planted his first rice crop in 1954 and has seen that initial effort grow into a 10,000-acre family farming operation in Bolivar and Sunflower Counties, Miss.