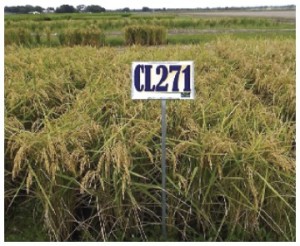 LSU AgCenter has announced the release of two new Clearfield rice varieties, an improved Jazzman and a medium grain, according to Steve Linscombe, rice breeder and director of the Rice Research Station. Both will be available for seed production this year and commercial production in 2015. Clearfield rice varieties can tolerate herbicides that kill red rice, a noxious weed in south Louisiana.

The Kellogg Co. is interested in using the medium grain variety, CL271, in its products, but the food company needs enough rice for a full test. “Up to this point, everything has been positive,” Linscombe said.

He said a seed increase was accomplished at the station with seeding at the rate of 10 pounds per acre, and it yielded 8,500 pounds (52.5 barrels) an acre of dry rice. Linscombe said the new variety, with much better blast resistance and higher yield potential, will replace CL261.

The new CL Jazzman outyields Jazzman and Jazzman 2, he said, and it retains the aroma aimed at competing with imported aromatic rice. “It probably has the prettiest grains of all the Jazzman types,” Linscombe said.

Linscombe said the winter nursery at Puerto Rico produced 18 pounds of seed, which was planted at the Rice Research Station on July 3 at the rate of six pounds per acre. It was harvested Nov. 13. “We’ll have enough to plant it as a seed increase, and it should be available in 2015,” he said.

He said an experimental long-grain Clearfield line in development has good blast disease resistance and good grain quality. He also noted that the hybrid breeding program at the Rice Research Station continues to make advances, and it’s possible that the release of a hybrid from the LSU AgCenter could be announced in the near future. “You can get a hybrid with good grain quality, but you might have to give up a bit of yield,” Linscombe said.

The Louisiana rice breeder pointed out that the breeding work at the Rice Research Station relies heavily on research funds from the rice checkoff program that assessed five cents for every 100 pounds of rice sold. The mandatory checkoff program has been successfully challenged, but rice producers still have the option of making voluntary checkoff payments, Linscombe said. “These checkoff dollars are critical to what we do at the Rice Research Station.”

Seven Valley Irrigation dealer locations, including Tennessee Tractor in Brownsville, Tenn., have earned Premier dealer status. This top tier of recognition is a new addition to the Valley Dealer Performance Program. Valley holds its dealers to the highest standards. The different levels in the Valley Dealer Performance Program focus on key areas of importance at the dealerships: service, aftermarket support and sales.

The new, top-tier Premier designation recognizes the absolute best of the best among Valley dealers.

“Our first class of Premier dealers has exceeded all our expectations,” said North American Vice President of Sales Rich Panowicz. “These businesses strive for continuous improvement year after year and are known for their outstanding service. We fully expect to see more dealers join this top tier as the program continues and they work toward these standards.”

LSU AgCenter agent Richard Letlow from Ouachita Parish said AgAlley allows the AgCenter to provide nutrition information to first-grade students and to give fourth-grade students a general knowledge of crops grown in the state.

“One of the main missions of the AgCenter has been to educate the public about agriculture and its products,” Letlow said. Each year, AgCenter agents set up an area in the Ike Hamilton Expo Center in West Monroe featuring the different crops grown in the area along with a mini-farm with animals, said LSU AgCenter agent Carol Pinnell-Alison of Franklin Parish.

This year more than 1,500 students came from Ouachita, Morehouse, Union, Richland, Franklin and Caldwell Parishes, according to Pinnell-Alison and Sandy Lyons, executive director of the North Louisiana Agri-Business Council, the coordinator of AgExpo. “We have been doing AgAlley for 12 years, but the AgExpo has been an annual event here in Ouachita Parish for probably about 40 years,” Letlow said.

LSU AgCenter 4-H agent Markaye Russell from Ouachita Parish said AgAlley is a two-day event for the first- and fourth-grade students, then the final two days of the four are open to the public. “I’m always surprised at the number of children and adults who come through and don’t really know what the raw commodity or product looks like,” Pinnell-Alison said. “They know what it looks like in the store, but they sometimes see raw corn and ask ‘is it real?’”

After testing scores of samples taken from rice fields across the state, Mississippi State University (MSU) scientists found that seed treatments are effective in managing the crop’s most troublesome insect pests.

“In Mississippi, we’ve been evaluating seed treatments for about five years,” said Jeff Gore, entomologist with the Mississippi Agricultural and Forestry Experiment Station and MSU Extension Service. “Our research has shown that rice grown with a seed treatment typically yields from eight to 12 bushels more per acre than untreated rice. The main reason for that yield increase is rice water weevil control.”

Gore said seed treatments are effective in both conventional rice varieties and hybrids.

“Although they do not provide 100 percent control of rice water weevil, seed treatments do provide significant benefits in rice,” he said. “Because control is not absolute, a foliar insecticide application may be necessary to maximize control in some situations.”

Gore said that seed treatments provide other benefits to rice producers, too.

“Seed treatments provide good control against a whole complex of other rice pests,” he said. “Seed treatments help manage chinch bugs, grape colapsis, thrips and soil insects, such as wire worms and white grubs, and get the plants off to a good, healthy start.”

The Mississippi Farm Bureau Federation Safety Department and the National Education Center for Agricultural Safety will host Grain Bin Safety Workshops again in 2014. The workshop for farmers and employees will begin with lunch at 11:30 a.m., and the program will be from 12:30-2:30 p.m. This program is designed to teach farmers and their employees the preliminary steps to take if someone is trapped in a grain bin until emergency responders arrive. There also will be a workshop for emergency responders at 6:00 p.m. This program is designed to teach fire fighters and emergency personnel how to extricate victims trapped inside a grain bin. Space is limited, and turnout gear is required.