Milo Hamilton is an agricultural economist, a co-founder of Firstgrain. com, a global authority on rice and an author. His new book, When Rice Shakes the World – The Importance of the First Grain to World Economic and Political Stability, is a cautionary tale about the social and agricultural upheaval occurring across Asia with the mass rural migration to urban centers.

As the population in places like China and India moves from farms to cities, Hamilton believes the business of feeding people efficiently and profitably has to move as well. He contends current rice pricing schemes dictated by central governments have to be replaced by a freer, market-oriented commodity price structure.

Hamilton’s book asks the question: “Is there a more transparent and market-driven approach to buying and selling food that brings the consumer and farmer closer together?” The answer, according to Hamilton, is yes. Utilizing technology, education and an entrepreneurial spirit, Asian countries can move to a market-driven system based on risk assessment and profitability rather than price control.

Hamilton also sees the day in the not too distant future when it will be the Western Hemisphere providing more of the world’s rice and at higher prices than we see today.

When Rice Shakes the World is a thought-provoking, enjoyable and easy read, and USA Rice recommends it to its audience. The book can be ordered through Amazon for $13.49.

LSU AgCenter Researchers Study Use Of Drones In Crop Monitoring

“We are investigating the use of UAVs to see what the capabilities are,” says Randy Price, LSU AgCenter engineer. “From what we can tell, the technology appears to be promising.”

Price said one of the first projects involves sending up a UAV equipped with a sensor to measure the vegetative index of a crop. The device measures the green growth of a plant, giving a possible indication if additional fertilizer is needed on specific areas of a field. Charles Malveaux, an LSU AgCenter research associate, has built three UAVs capable of flying themselves on a programmed mission and is in the process of building two more right now.

Price said the Federal Aviation Administration is writing regulations for UAVs and drones to prevent interfering with manned aircraft, including agricultural airplanes and helicopters. The unmanned devices are still classified as hobby aircraft not available for commercial use, but new regulations will address commercial applications. LSU AgCenter is applying for a special FAA permit to conduct further research and the eventual publication of a research paper.

Price said entomologists will be able to use the pilotless vehicles to scout for insects, and weed scientists will be able to quickly view a field for herbicide-resistant weeds. Eric Webster, LSU AgCenter weed scientist, said UAVs might be helpful for farmers to spray swaths in a field not sprayed with herbicides by conventional aerial applicators. Steve Linscombe, director of the LSU AgCenter Rice Research Station, said the battery-powered aircraft might be useful in rice breeding.

“We think that they might be useful in creating wind movement that might facilitate the transfer of pollen from restorer lines to male sterile lines to create the F1 seed,” Linscombe says. 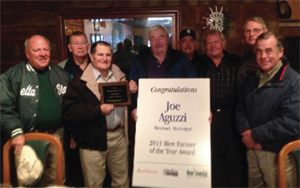 Joe Aguzzi, who was recently named 2013 Rice Farmer of the Year, was unable to attend the awards luncheon at the USA Rice Conference in St. Louis due to inclement weather. However, Michael Aguzzi, who did attend the meeting, hand-delivered the plaque and “Congratulations” sign to his grandfather at an impromptu presentation that took place at The Bean Counter in Cleveland, Miss., where Joe is surrounded by his friends. From left are Billy Nowell (Mayor of Cleveland), Jim Boggs, Joe, Wayne Reed, Bill Quinton, Bern Prewitt, Stacy Davidson and Lawrence Mellen.

Lundberg Family Farms has earned top honors for Ag Innovation at the coveted 29th Annual Regional Innovation Awards. The Innovation awards are a testament of the commitment to business success occurring in the “530” area code region.

Companies and professionals are honored because of their tremendous achievements conducive to innovation and their gamechanging impact, not only locally, but statewide, nationally and globally. Homer Lundberg accepted the award on behalf of Lundberg Family Farms.

“The Lundberg family has always been known as an agriculture innovator in the Sacramento Valley. At times, we were even called ‘those crazy Lundbergs’ for some of our groundbreaking inventions,” says Homer Lundberg, second generation family member and organic rice pioneer. “I am proud that Lundberg’s third generation continues the family tradition of agricultural innovation and am thrilled that they are being recognized for their efforts by their peers with this award.”

He said his future research interests are mainly about using innovative and low-cost management approaches to build soil carbon and manage soil acidity. Two soil issues in particular that cause significant trouble and expense to East Texas producers are soil acidity and low organic matter.

On Dec. 27, David Reinbott, Agriculture Business Specialist with University of Missouri Extension, made the following comments in his Grain Marketing Commentary:

“For cash rice quotes, contact your rice buyer to get the most current price quotes and cash price outlook.