Louisiana rice crop off to a good start 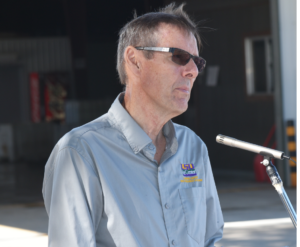 “If that’s the worst thing we see, then we’re going to have a great year,” he said.

The rice plants also benefitted from warm May temperatures, although hail damaged fields in a few instances.

Rice in the flowering stage may have been damaged by Cristobal, “but for the most part, we had very little impact from that storm,” Harrell said.

The south Louisiana crop is about 10 days ahead of normal.

“Don’t be surprised if you hear reports of rice being harvested in the first part of July,” he said.

Farmers who anticipate growing a second rice crop should start planning. Applying gibberellic acid at the soft dough stage of development can give improved second-crop yields.

“Sixty percent of the time, we have seen an increase with gibberellic acid,” he said.

Mowing rice stubble after harvest of the first crop can improve second crop yields by 5 barrels.

AgCenter weed scientist Eric Webster said recent cloudy weather could cause rice sprayed with the Provisia herbicide to have signs of injury. Leaves could appear to be misshapen, but the plants will recover in two to three weeks.

“It’s just something we’re going to have to live with,” he said.

The second version of Provisia, PVL02, has improved yield potential from PVL01. AgCenter rice breeder Adam Famoso has three lines of Provisia that could have even better yields.

Webster said the herbicide Loyant can be applied with fertilizer, but the best results are obtained when it is sprayed.

Loyant controls ducksalad for more than five weeks because of its impressive residual strength.

A new product, a mixture of Loyant and Grasp, will be available from Corteva.

Good results against the weevil can be obtained with a new product, Fortenza, if it is used with Cruiser.

The Mexican rice borer is becoming more of a consistent threat to rice in south Louisiana.

The apple snail, an invasive species, is expanding its range, Wilson said. The snails interfere with crawfish operations, but one farmer lost a stand of rice to the pest, and the farmer resorted to treating the field with copper sulfate and replanting.

Stem borers can cause losses of 15% to 20%, and currently only pyrethroids are labeled for control of the insects. But FMC has applied for a label to use Prevathon on rice for stem borers.

Stink bugs in Louisiana fields have not shown resistance to pyrethroids, but they have developed resistance in Texas, Wilson said.

Farmers may have to spray up to three times for stinkbugs because the available chemicals have little residual capability. A new product, Tenchu, may only require one application, he said.

AgCenter plant pathologist Don Groth said farmers should be ready for false smut and kernel smut. The diseases showed up last year in the worst outbreak he’s ever seen.

Propiconazole and difenoconazole have the best action against both smuts, he said, but they have to be applied at the boot stage even though it’s a disease that shows up in the heading stage. Boot fungicide applications also will control sheath blight and Cercospora. However, blast disease is controlled by applications at heading.

“This weather is coming at a perfect time. It’s beneficial to fill the grain by delaying disease development,” Groth said.

Groth announced he will probably be retiring in the winter after 37 years with the AgCenter. He said the Evangeline Parish field day may be his last, and he expressed his gratitude.

“I can’t imagine another industry I’d rather work with,” he told farmers and ag consultants. 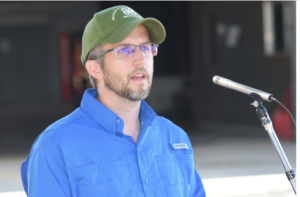 The Evangeline Parish field day was the first for the new AgCenter soybean specialist, David Moseley.

The current projection for the state’s soybean crop is about 900,000 acres, roughly the same as last year, he said.

“Most of our crop is looking pretty good right now,” Moseley said.

The crop is ahead of last year’s progress, and 99% of the crop is in the fair-to-excellent range.

Replanting has been needed for some fields that flooded. The southern part of the state has been dry, Moseley said, while the northern parishes have been wet, the opposite of the usual spring pattern.

Moseley said his research at the Dean Lee Research and Extension Center at Alexandria is being conducted as usual, despite the ongoing coronavirus pandemic and a tornado.