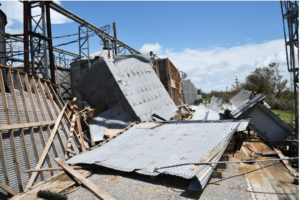 Hurricane Laura caused $525.4 million in damage to Louisiana farmers and $1.1 billion to the Louisiana timber industry, according to preliminary estimates by the Louisiana State University AgCenter.

Laura devastated 757,538 acres of timber from the southwest to northeast parts of the state, according to a report by AgCenter economist Kurt Guidry and AgCenter forestry specialist Michael Blazier.

In comparison, agricultural losses — including forestry, crops and fisheries — from hurricanes Katrina and Rita in 2005 totaled $1.5 billion.

Laura’s $1.6 billion total in losses for Louisiana agriculture will likely increase when damage estimates for the fisheries industry are completed by the Louisiana Department of Wildlife and Fisheries.

The damage in 2005 and this year are different, Guidry said. Laura was more of a wind event, while Katrina and Rita brought flooding along coastal Louisiana. Infrastructure damaged by wind was the big factor this year, and crops were not as affected this year as in 2005.

So was Laura the costliest storm for Louisiana agriculture?

“It’s going to be up there as one of the highest we’ve ever had,” Guidry said. “Based on the amount of infrastructure damage that occurred and the losses associated with timber, the total economic impact to the food and fiber sector from Hurricane Laura will be as large as or larger than any storm that I have developed estimates for since my time with the AgCenter.”

But the storm’s impact on crop production and farm revenues across all commodities has been surpassed by other storms or weather events like droughts that have resulted in more widespread and larger production impacts.

However, from a timber standpoint, Blazier said, Laura appears to be the most devastating storm to hit Louisiana, even more destructive than Katrina and Rita combined.

“It’s demoralizing. I checked and checked and rechecked the figures, and if anything, it’s conservative,” he said.

Using data from aerial surveys by the Louisiana Department of Agriculture and Forestry, Vernon Parish was estimated to have the largest economic loss of timber at $360 million on 160,416 acres, followed by Rapides, Beauregard, Grant and Allen parishes, all estimated to have timber damage exceeding $100 million.

Calcasieu Parish had the highest forestry acreage damage total of 188,292 acres, but the lost timber value was estimated at $76.7 million.

The damage estimate includes national forests as well as privately owned land. Many landowners use timber revenue to supplement their retirement income, and this storm will affect people throughout the state, Blazier said. As an example, he said, one landowner with 42 acres of commercial timber estimated that half of their trees were destroyed.

The heaviest damage tracked the path of the storm’s eye as it went almost all the way to Arkansas as a hurricane. Anecdotal evidence suggests the worst damage occurred in forests that had been thinned recently. “There was just more wind that could come through those stands,” Blazier said.

The AgCenter report determined that only 10% of the downed pine trees can be salvaged and that none of the damaged hardwood trees are salvageable. Blazier said market demand for hardwood pulp is low.

Downed trees in Louisiana’s environment must be salvaged quickly because the wood deteriorates rapidly.

“We have a very short window, maybe less than a month,” he said.

In addition, the report says Laura will have long-term effects on the timber industry, with increased debris resulting in more disease and insect pressure on surviving timber. Also, the debris will worsen the potential for wildfire outbreaks and increase the costs of establishing new tree growth. 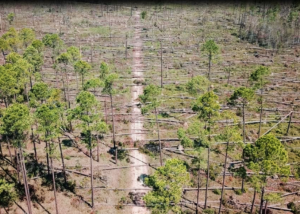 A photo taken with a drone shows downed trees in the Vernon Unit of the Kisatchie National Forest. The LSU AgCenter estimates that timber damage from Hurricane Laura totaled $1.1 billion — photo by U.S. Department of Agriculture Forest Service

Most of the agricultural losses involve infrastructure damage, according to an agronomic crops report by Guidry. That report broke down the impacts on farmers into five categories:

The report says most damage was caused by wind. “Unlike other storms that resulted in widespread and prolonged flooding, Hurricane Laura moved quickly through the state with flooding being generally confined to tidal surge along the coast. However, excessive winds throughout Laura’s entire path through the state caused significant infrastructure damage.”

Wind caused row crops to lodge, or be blown over.

The state’s rice crop suffered most, the report says, with 74,000 acres affected for an economic impact of $28.5 million. Yield losses for the first and second crops are estimated at 1.7 million hundredweight, with average losses of 38% for the first crop and 37% for the second crop.

“There were also significant acres of rice that was in the flowering stage of its development,” the report says. “High winds during that time is expected to lead to reduced pollination and reduced overall production.”

Yield on 153,000 affected acres is projected to be decreased by 9.6%, or 828,000 bushels, costing more than $8 million. Increased harvest costs from downed soybeans is expected to cost farmers $1.3 million, bringing the total losses to $9.4 million.

The total impact amount of $6.5 million results from an 11.2% yield decrease of 7.8 million pounds on almost 60,000 affected acres for a $5 million loss. The total includes an additional $1.5 million from increased harvest costs.

The estimate concludes that 5,000 acres of crawfish ponds are affected, with an estimated loss of 75%, or 2 million pounds, for a total impact of $2.7 million.

The storm had minimal impact on sweet potatoes, with losses estimated at about $30,000.

The total livestock economic impact is estimated at $1.8 million.

In poultry, the estimated loss of 101,000 birds is projected to cost $545,400. Much of that resulted from power outages that shut down cooling systems needed to control temperatures in chicken houses.

A dozen horses died from the storm, and 530 were evacuated, bringing the total impact to $38,575.

Buildings and facilities carried the biggest part of Louisiana’s agricultural damage estimate with a value of $403.2 million. The report estimates that the storm damaged a third of the ag-related buildings and other structures across 13 parishes.

Also, the storm damaged 5,100 miles of fencing that will cost $58.8 million to repair or replace, according to the report.

“Also, for those parishes designated as disaster areas, emergency farm loans are typically made available,” he said.

Federal legislative action would be required for additional assistance.“In other storm events, there have been programs that have been made available,” Guidry said.