Despite COVID, work progresses on University of Arkansas’ NERREC 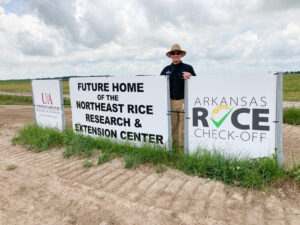 If construction goes according to schedule, the University of Arkansas System’ Northeast Rice Research and Extension Center near Harrisburg will begin hosting rice field trials and experiments in 2021.

This season, soil over much of the 600-acre facility was moved to level and grade fields. This facilitated installation of new drainage and irrigation systems. Another 160 acres were leased to a local soybean producer, and one field was used by Extension weed specialist Tommy Butts to measure nozzle distribution and uniformity during aerial application.

“We want the farm shop to be in place and hopefully the equipment in place so we can have rice production and research this coming season – that’s our hope,” said NERREC Director Tim Burcham. “The irrigation system will be ready to go and the equipment should be here. The office building, public space and educational wing will be constructed in subsequent phases.”

Like many other activities this year, the ongoing coronavirus pandemic has slowed planning and “put a hitch in our giddy-up,” he said. “We’ve been somewhat stymied by COVID-19, as it has limited our ability to travel and visit with people face-to-face.”

Because the facility is a public-private partnership, Burcham said the university is looking to private industry to help underwrite part of it. Actual ground breaking on the main building will depend on private fund-raising efforts.

“We hope COVID-19 allows us to get back into fund raising mode soon,” he said.

The 26,000-square-foot conceptual main building to which he referred will house six laboratories, 12 offices and a public section.

Unlike the university’s other research facilities, part of the NERREC will be specifically devoted to educational purposes, Burcham said.

“This station is going to be somewhat different than traditional stations,” he said. “That’s not to say we don’t do education programs at our other stations, we do; but we’re being intentional in designing this facility to work with K-5 and up. Not only will we have traditional Extension outreach, but we’ll also work with regional schools to help students understand rice production in Arkansas and around the world.” 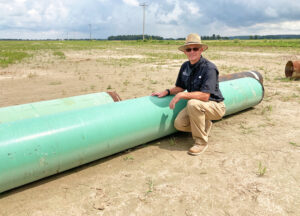 The drainage and irrigation systems at the NERREC are nearing completion.

Based on conceptual designs, the facility will have a small greenhouse and a classroom to accommodate 30-35 K-5 students.

It also will have meeting facilities along with a commercial-grade kitchen that can be used to hold grower meetings as well as public get-togethers for up to 250 people. The public space, featuring large glass windows, will look out over the farm. An elevated observation deck also will offer public viewing of the fields.

Although the facility will be involved in housing scientists who conduct research, Burcham said it also could serve as a stage for regional chefs showing how to prepare various rice dishes for cooking shows.

The university purchased the 600 acres of Poinsett County land near Harrisburg in mid-2018. The location, next door to RiceTec, was intentionally chosen because of its high visibility along Arkansas Highway 1 as well as its soil types unique to the region. More than 60% of the state’s rice is grown in the northeast.

“Our goal from the onset is certainly to be a research station, and keep in mind also that this is the only University of Arkansas System station on these Henry silt loams and Calloway silt loams,” Burcham said. “Now we’ll be able to grow these (rice) varieties on these white silt loam soils that are very predominate in our top rice-producing counties.”

UA System’s Northeast Research and Extension Center near Keiser — only about 33 miles to the east as the crow flies — is predominately Sharkey clay.
Funding for the land purchase came from a $4 million gift from the Arkansas Rice Research Promotion Board, according to a 2018 university news release. The university’s Division of Agriculture was working on two more gifts to cover facility construction and equipment, as well as an endowment to cover base operating costs. The physical needs for the facility are still under discussion.

Existing pumps associated with the 32-acre reservoir on the north end of the farm are being converted to 3-phase electric power to facilitate future automated control capabilities.

A well on the south side of the reservoir will provide 1,700-2,000 gallons per minute. In addition, the farm can pump from the adjacent L’Anguille River.

Having access to three different water sources will allow researchers to study, for example, how cold water from groundwater affects rice growth. It also will allow the farm to make more efficient use of natural resources, Burcham said.

The university tapped the talents of one of its own – Chris Henry, an associate professor and irrigation/water management engineer – to help design the irrigation systems.

“GIS has been instrumental in our planning,” Burcham said. “Without GIS, we would not be where we are on the irrigation system. We have the capability now to look at the system and to know what it’s going to do when we install it.

“The donation of these individuals time and talent has allowed us to move forward with an irrigation and drainage design that is flexible and efficient.”

This collaborative effort demonstrates the importance of public/private partnerships to meet the goals of the new UA System Northeast Rice Research and Extension Center.