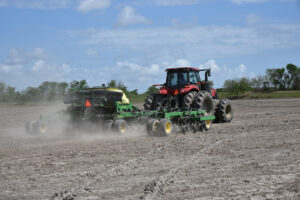 A field near Gueydan in Vermilion Parish is planted with a seed drill last week. Rice planting in south Louisiana was almost completed before this week’s heavy rains, but north Louisiana planting has been delayed by wet weather that has kept farmers out of the fields — photo by Bruce Schultz/LSU AgCenter

Rice planting is wrapping up in south Louisiana, but wet weather has kept farmers out of the fields in the north.

“It’s moving along pretty fast,” said Todd Fontenot, Louisiana State University AgCenter agent in Evangeline Parish. “A lot of rice has been planted in a short period of time.”

He estimated 80% to 85% of the crop is planted in Evangeline.

“Rice acreage is expected to be reduced primarily in north Louisiana due to higher demand and prices for corn and soybeans,” Levy said.

Michael Deliberto, LSU AgCenter economist, said it is anticipated that Louisiana farmers will reduce their rice acreage by 7% this year to approximately 445,000 acres.

Levy said some of this year’s crop has already faced challenges. Strong winds have caused some water-planted seed to drift, and heavy rains and cold conditions have slowed rice development, he said.

Deshotel estimated that 70% of the crop has been planted.

He also said cool weather has slowed early plant growth. Warm spells have been followed by cool weather. “Crops are not progressing with those kinds of temperatures.”

Jeremy Hebert, Acadia Parish agent, said planting got off to a good start in early March. “The majority of the crop in Acadia Parish and the surrounding parishes is planted.”

He said some farmers were finished by mid-March.

He said farmers have had good chances for planting, followed by needed rain. But more acreage is being water seeded this year, he said.

Scene in the northeast

“For the past three weeks, we started catching the weekly 2-inch rains,” he said. “There’s not a lot of rice planting going on.”

“Some are telling me they’re going to back away from rice,” he said. “A price of $14 for soybeans is hard for some of these guys to pass up.”

He said some farmers are starting to water seed their rice.

And farmers who have used row rice have changed their strategy to planting on flat ground, then using a roller to cut grooves in the soil about 38 inches apart for better water control.

Garner said the situation is the same in Arkansas where rain has caused problems also. “The guys in Arkansas are getting the same rains as we are, and they’ve gotten some that we missed.”

Deliberto said Arkansas farmers are expected to reduce their rice acreage by 15%, choosing to plant corn or soybeans, and that could help boost rice prices.

Arkansas’ rice acreage affects rice prices because it is the nation’s largest rice-producing state with last year’s total at 1.3 million, more than a third of the U.S. total.

Many Arkansas farmers will be shifting rice acreage to corn and soybeans to take advantage of higher prices, Deliberto said.

An expected demand increase for rice overseas could also boost prices, he said. “A lot of attention will be focused on tenders floated by the Iraqis.”