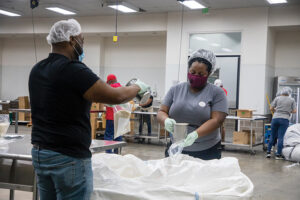 For more than three decades, Danbury, Texas, rice producer Jacko Garrett has been growing rice specifically to donate to the Houston Food Bank. Along the way, he has enlisted the help of other growers and obtained donations from agricultural chemical dealers, seed producers, aerial applicators and millers.

“We’re just too blessed not to give back,” he said.

Starting in the mid-1980s when Garrett and his father shipped a truckload of rice to the food bank, his efforts have continued to grow. In 1999, Garrett founded the charity Share the Harvest to better handle his rice donations as well as those of fellow rice growers he recruits.

At no time have his gifts been more needed than during the ongoing COVID-19 pandemic, said Sabrina Bosiacki, agriculture industry manager for the Houston Food Bank.

Before the pandemic, the food bank estimated there are about 1.1 million food-insecure people living in the 18-county region it serves. After COVID-19 hit, it more than doubled distribution from 400,000 pounds per day to up to 1 million pounds per day.

“Our partners, especially, are really feeling the strain of double and triple the demand within the community,” Bosiacki said.

Serving an area bounded by Chambers County to the east and Austin, Ford Bend and Brazoria counties on the west, the Houston Food Bank is the largest in the nation in distribution.

Because rice is non-perishable and familiar to most consumers, it lends itself for use by food banks.

“It’s a really important staple in a lot of pantries as a carb that helps fill bellies,” Bosiacki said. “We work really hard to take that rice and pair it with lean proteins, dairy and fresh vegetables to create a well-balanced meal.”

The Houston Food Bank is used to dealing with disasters, such as after hurricanes, but those increased demands typically wane. The pandemic, however, has been going on for a year, further stressing the food bank. 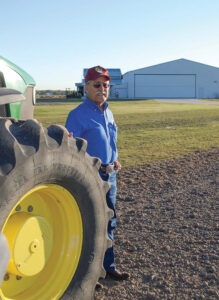 “The challenge for us is we really haven’t seen that need tapering off,” she said. In February alone, the food bank distributed more than 19.8 million pounds of food.

Over the years, Garrett’s donations have ebbed and flowed, depending on the acreage he farmed. In recent years, he has downsized his operation but still grows 130 acres of rice specifically for the food bank. He also enlisted Al Shimek of Garwood to grow some acreage earmarked for donating.

During 2020 and again this season, Garrett said input suppliers, aerial applicators and a mill volunteered their services.

“It was amazing,” Garrett said. “This last year we didn’t have to pay for one herbicide, and the industry donated all the fertilizer. It was incredible. They just stepped up and really did a great job furnishing whatever we needed.”

This season, RiceTec provided XP753, which excites Garrett because of its high yield potential.

Randy Waligura at Texana Seed also has been a long-time supporter of Garrett’s charity.

If you farm within the Houston Food Bank’s boundaries and want to donate rice, contact Bosiacki at 832-217-8246 or sbosiacki@houstonfoodbank.org. If you farm elsewhere and want to donate rice, visit https://www.feedingamerica.org/ to find a food bank near you.
Garrett’s brother who runs Garrett Flying Services, along with Lissie Flying Service owned by the Gertson family, donated aerial application services. BASF donated herbicide, and long-time backers Dickie and Betty Adams of Colorado County Mill contributed their services.

Garrett ships 44,500 pounds of rice in 2,000-pound totes every six weeks. Then volunteers at the food bank break it down and repack it into typically 2-pound bags. All told, the rice shipments equate to between 9 million and 10 million meals annually.

Although the food bank receives occasional rice donations from other producers or an overrun of a few pallets, Bosiacki said the shipments from Share the Harvest are a wonderful, consistent gift of much-needed rice.