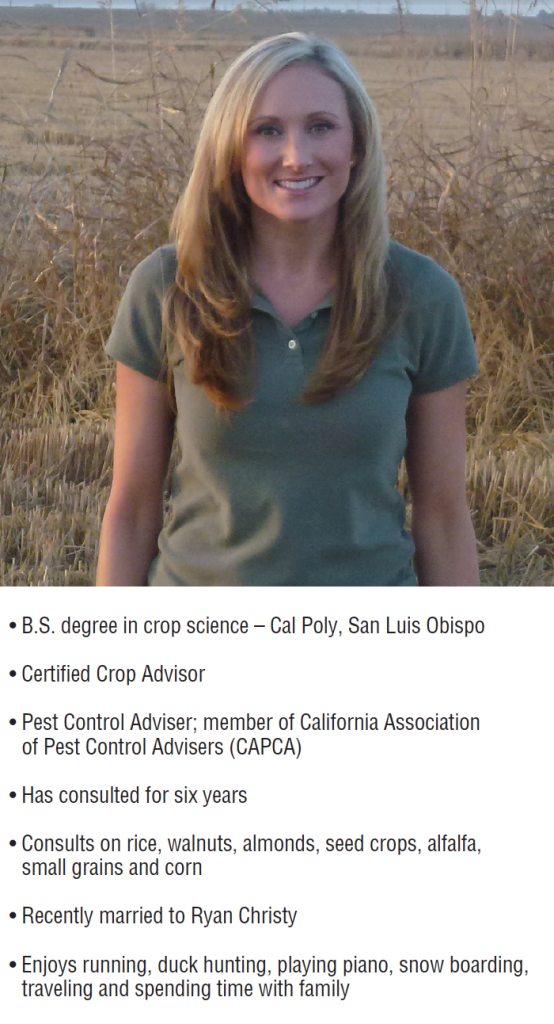 I grew up in Missouri where my FFA agronomy team placed at many different competitions, including State and the Purdue Invitational Crops Contest. I moved to California when I was 17 and attended Cal Poly. After college, I interned with an agribusiness firm for a summer. A month into my internship, I was given the opportunity to stay on as a full-time PCA where I worked side-by-side with other rice PCAs. Later, in the spring of 2012, I joined Wilbur-Ellis Company. Today, I am responsible for about 8,000 acres of rice.

From March through the beginning of May, we weren’t certain about what our water situation would be for the 2014 season. Some farmers had wells on their property that they could potentially use, whereas farmers on district water were cut back significantly or sold their water for permanent crops in the area. In making our projected chemical forecasts for the year, we knew there were certain products we would have to consider using because of the zero spill “rule” after July 1. Luckily, these herbicides worked pretty well considering that two of our best tools – Clincher and Granite SC – weren’t options in most fields this year due to the water shortage.

For the best grass control in 2014, we applied Cerano, followed by Regiment, followed by propanil/Grandstand. We also saw great results with the following three herbicide programs that we used to target propanil-resistant smallflower umbrella plant: 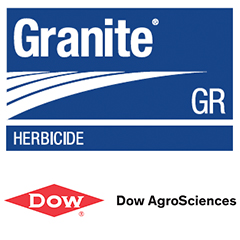 This program was great for stand establishment due to ducksalad becoming more prevalent in some fields. At the end of the season, we saw some great results after using this “one-two punch” program.

None of the programs required using the pinpoint flood method, therefore, saving water. We were not draining the fields as much, so we were also avoiding any loss of nitrogen. Our main fertility program involves putting most of the nitrogen in aqua ammonia up front before flooding. Once the rice has popped out of the water and is free from the potential of scum, we apply phosphorous starter fertilizer.

For 2015, we will focus on using water-saving herbicide programs and establishing a good stand – the best herbicide to begin with. We also have to be good stewards of all of our products. We can’t afford to lose any of them. Rice is the main staple food for over half of the world, so we have some big shoes to keep filled! Focusing on water conservation is going to be crucial for the next decade and beyond. 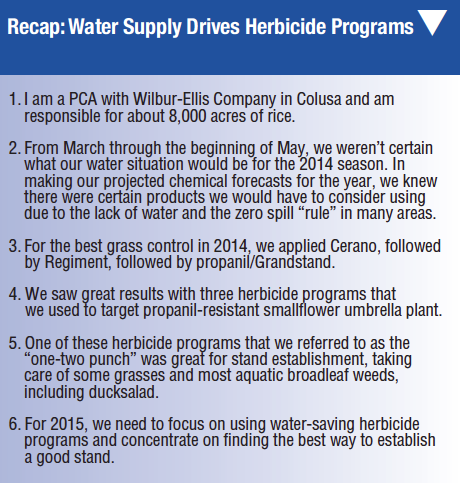