Focus For 2015: Return On Investment 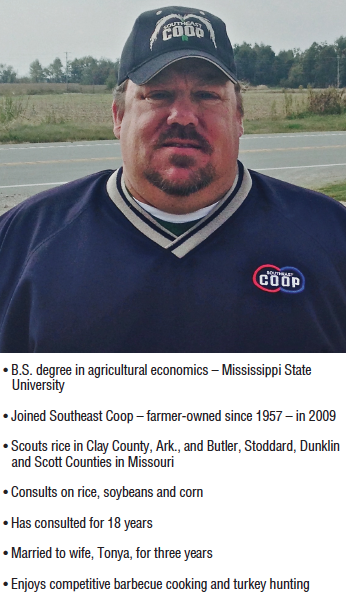 I remember that the first rice field I ever scouted as a college intern was north of Marks, Miss. Later, I spent time scouting in northeast Louisiana, North Carolina and Kentucky. In 2009, Mike Galloway hired me to work for Southeast Coop, a farmer-owned business since 1957, in the Missouri Bootheel. Today, I scout between 10,000 and 15,000 acres of rice, depending on my growers’ rotations.

This past season was unseasonably cold and wet, so not being able to flood in a timely manner was our biggest challenge. We were late pulling levees, so we spoonfed the rice by flying on an extra application of ammonium sulfate before we could get in there with our big shot of urea. However, in spite of timing issues and a lot of panicle blast, the yields have been fine.

The most troublesome weeds we have to contend with in our area are barnyardgrass, sprangletop and indigo. The backbone of my herbicide program in both conventional and Clearfield rice is Grasp, Regiment, Command and Facet L. I’m big on ALS chemistry because we have a lot of propanil-resistant barnyardgrass.

In the insect arena, we treat for stink bugs every year by adding two ounces of Karate in with our fungicides. That takes care of the stink bug issues. Another important part of our production strategy is the use of NipsIt SUITE – a premium seed treatment. Since we have taken seeding rates down to all time lows, everything that is planted needs to come up. As for fertility, nitrogen is a no-brainer. I focus on potash and ammonium sulfate. The sulfur in ammonium sulfate helps drive tillering, and the potassium in potash helps plant health and builds stalk strength. And standing rice is always easier to cut than lodged rice.

For 2015, our commodity prices are going to be lower than they have been in a while. With this in mind, pick varieties that have been yielding and working for you. Focus on timeliness. Go with a more specific herbicide program instead of a blanket treatment to help control expenses. On a final note, as you are managing your rice crop during the upcoming year, remember that it is always about ROI – return on investment. 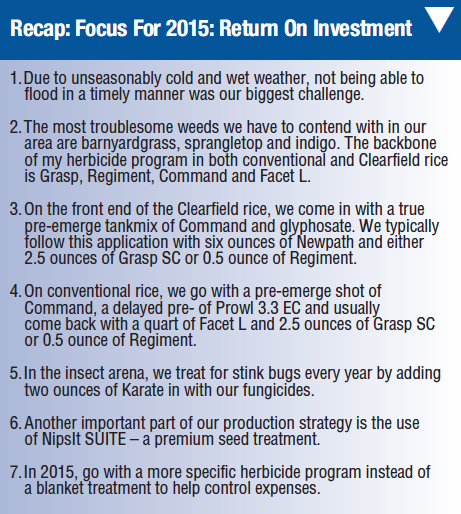