Before moving to East Bernard, Texas, in 1986 to take the position of farm manager at the hybrid rice research station, I farmed with my dad in Missouri. In 1990, I began consulting with another company prior to establishing McAnally Ag Consulting.

Last year, rice farmers in the area did very well. Yields and quality were good despite some early season cold weather issues. Because we are located on the Gulf Coast, developing effective herbicide programs is important to control a variety of troublesome weeds, including barnyardgrass, sprangletop, alligator weed, Mexican weed (Texas weed), waterhemp, sedges and jointvetches. We are seeing more resistance in some of the weeds each year, particularly in barnyardgrass and waterhemp. Since barnyardgrass is sometimes resistant to propanil, we apply Grasp to manage the grass weeds. As far as resistant broadleaf weeds, we depend on RebelEX or Regiment to achieve control. If there are a lot of sedges present, we may include Permit in the first herbicide shot. You have to take a proactive approach to manage all of these weeds.

If a good seedbed has been established prior to planting and not many weeds are present, we apply Command. In areas where drift might be an issue because of prevailing winds out of the southeast, we apply a residual to stretch out the grass control. In those instances, I will include Facet in the mix, being proactive again. As the first herbicide shot plays out, I apply herbicides as needed for weeds and grasses, then go to flood and let the water be the herbicide for the rest of the season.

It’s also important to have a good fertility program as well as a herbicide program to maximize yields. Based on soil sample results, I start with nitrogen, potassium and phosphorus as a base fertilizer and follow up with a topdress application in-season. Never let your rice get stressed from lack of nitrogen, which can result in a yield loss.

As far as insects, I scout fields twice a week so I can manage these pests as they show up. We have a few aphids, chinch bugs and armyworms early in the season, but they are not everywhere, every year. As the rice begins to head, stink bugs are a significant pest. In areas where there has been a lot of stem borer activity, I take a proactive approach and put Dermacor on the seed to head off that problem.

Because of water restrictions for irrigation imposed by the Lower Colorado River Authority, rice acres will be down in 2015 in the areas that depend on the river system. Rice acreage should remain the same where rice farmers have access to wells. As farmers look to the upcoming season, it’s important to stay proactive in all areas: seed selection; seedbed preparation; weed, disease and insect control; and fertilizer timing. And, of course, water management is key.

More about the author: 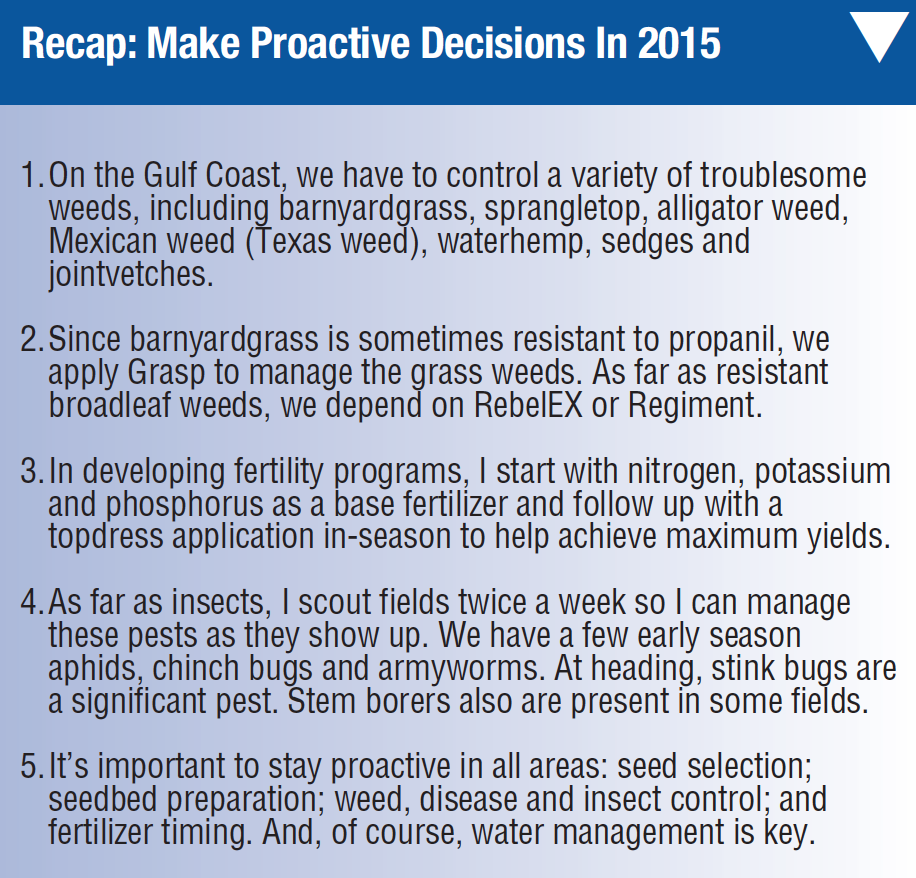