Prepare for Challenges in 2015

While in college, I interned with Jack McDaniel, an independent consultant at the time, and enjoyed it even though the hours were long. I also did two internships with a crop protection company on a research farm and liked the research end of the industry. As I continued my education, I met several independent consultants and contract researchers and liked what they did. At the end of my Post Doctorate study with the LSU AgCenter, I had the opportunity to start consulting with a group that already had a business.

It is amazing how much has changed in those 10 years – from the introduction of new chemistries to new technologies to weed resistance issues. Even though we had issues with late planting and delayed herbicide applications last year, yields were good and, for the most part, harvest season went well.

Our weed issues are not much different from other places. Barnyardgrass is our No. 1 target. Sprangletop seems to be getting more prevalent and difficult to control, and Nealley’s sprangletop, which may also prove to be difficult to control, has started showing up in some areas. Our toughest broadleaf weeds are palmleaf morningglory and Texas weed. Jointvetch is becoming more widespread, too. We are facing barnyardgrass that is resistant to multiple chemistries, including the ALS chemistry. Halosulfuron-resistant flatsedge showed up in some fields in 2014. We are going to be more aggressive with our pre-emergence herbicide regimes up front to keep resistant weeds from emerging and becoming an issue. Using multiple modes of action herbicides like RebelEX pre-flood will be critical in controlling resistant weeds and reducing selectivity. It’s absolutely necessary to start clean and stay clean during the first four weeks of rice growth.

Planting during the last week of March to mid-April is critical in maximizing yield. The later you plant, the more weed, disease and insect pressure you will encounter. I try to avoid mid-season fungicide applications, but weather conditions and varieties sensitive to sheath blight sometimes call for action. Fungicide premix applications with two modes of action are made at boot to control smut and avoid disease that may reduce milling yield. I am aggressive with stink bug applications, especially the first two weeks of heading and if I am finding signs of reproduction.

2015 is going to be demanding. Low commodity prices will challenge all of us to implement practices that maximize yield, while providing the highest return on investment. Weed control strategies must be aggressive and designed on a field-by-field basis. Resistance screening may be necessary to identify problem areas. Going into the upcoming season aware of weed resistance and planning for it would be a good approach. 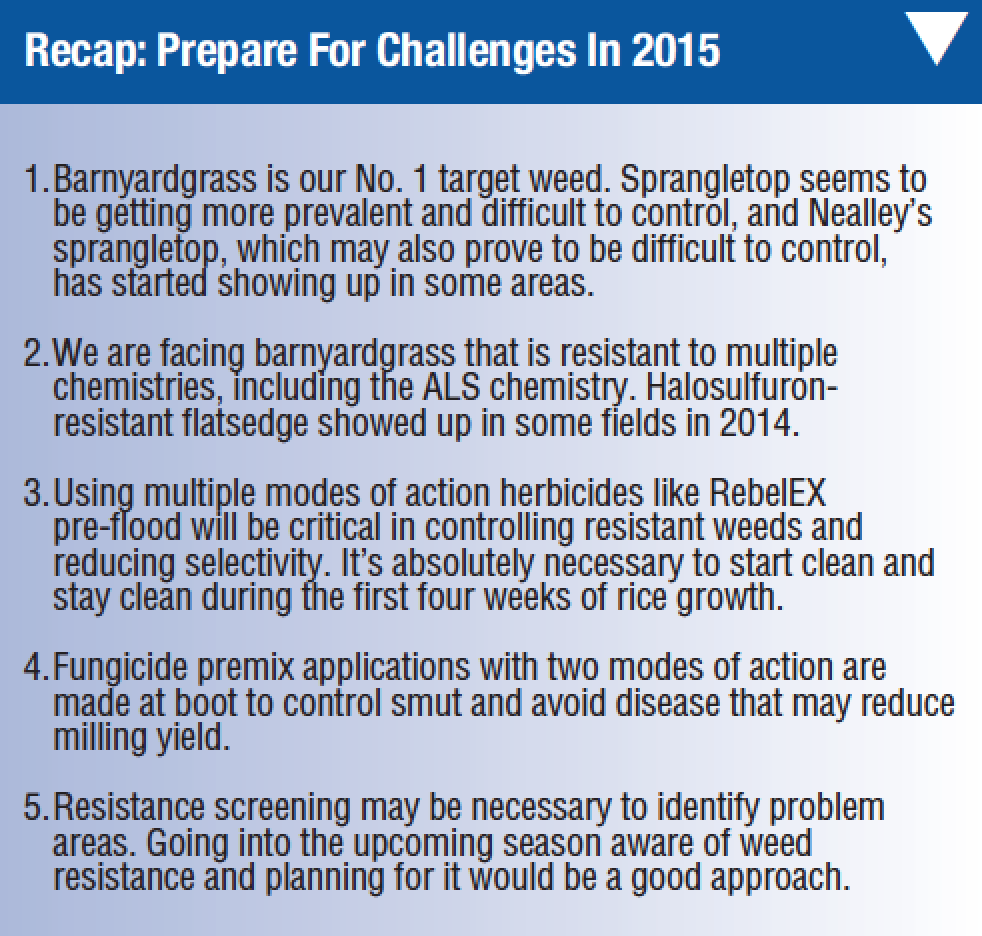