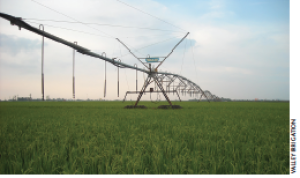 Take a look at what you missed at the 2015 Rice Outlook Conference
in New Orleans.

If you weren’t able to attend the recent 2015 Rice Outlook Conference in New Orleans, Rice Farming editor Vicky Boyd has compiled some of the highlights, including new products that were featured in the conference expo.

Pipe Planner 3.0 offers easy-to-use Web-based calculations to determine the size of holes and the number of holes or gates to use with collapsible or layflat poly irrigation tubing. 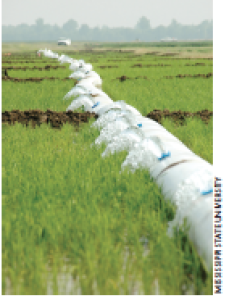 The Web-based Pipe Planner allows
users to easily figure out the number
and spacing of holes or gates for collapsible poly irrigation tubing.

The company, based in Little Rock, Ark., decided to make the latest version of Pipe Planner available free to encourage grower adoption of the technology. Previous versions were available for a fee.

“It’s free to any grower who wants to use it, whether they’re a customer or not, because we believe that MIRI and Pipe Planner address some of the fundamental issues farmers are facing in this environment – water availability, water conservation and farmers’ bottom lines,” Whiteley says.

The tool is based on Google maps and allows users to draw their field boundaries, levees and pipe locations. Users also enter water flow rates in gallons per minute.

“Once you submit that, Pipe Planner provides the size of pipe, how much pipe and what spacing and hole sizes or gates for each paddy,” he says.

It takes growers familiar with the program about three to five minutes to map out a 40-acre field. Even novices can lay out a similarly sized field in 10 to 20 minutes, he says.

For those growers who want to experiment with center-pivot irrigation of rice, crop insurance will be available this season to help manage the associated risks.

The sprinkler-irrigated rice crop insurance program, underwritten by the U.S. Department of Agriculture’s Risk Management Agency, will be offered for Arkansas, Missouri, Tennessee and Texas. It carries several requirements for both the crop itself and the irrigation system, says Kelly Downing, international ag project specialist with Valley, Neb.-based Valley Irrigation.

The rice variety have to be short- to mid-season maturity, have blast resistance and have the potential to reach USDA No. 1 grade. The irrigation source must be able to yield at least 7.5 gallons per minute per acre, and the pivot must be able to complete a full circle in no longer than 24 hours.

“We need to make sure the irrigation system has the ability to meet full ET (evapotranspiration) of the crop,” Downing says.

Participants also will have to have fields scouted at least once per week and document fertility practices and weed, disease and insect management throughout the season.

Pioneer’s introduction of the Bolt soybean with enhanced tolerance to ALS herbicides should help address some of the issues with off-target movement of that class of herbicides from rice, says Frank Carey, Valent U.S.A. field market development specialist in Olive Branch, Miss.

Conventional beans, on the other hand, are very sensitive to ALS herbicides.
Carey describes Bolt soybean’s enhanced tolerance to ALS herbicides as “STS on steroids,” referring to sulfonylurea-tolerant varieties. STS soybeans were first introduced in 1994 and are considered the grandfather of herbicide-tolerant beans.

Sulfonylureas are part of the much bigger acetolactate synthase, or ALS, herbicide Group 2. ALS rice herbicides include Regiment and League MVP, both from Valent.

“This is a very exciting development not just for Regiment but also the other ALS’s out there like League,” Carey says. 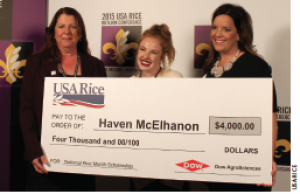 Haven McElhanon, the daughter of a Forrest City, Ark., rice producer, garnered the 2015 USA Rice Federation National Rice Month Scholarship sponsored by Dow AgroSciences. She received a $4,000 scholarship and a trip to the awards ceremony at the 2015 USA Rice Outlook Conference.

The second- and third-place winners were Mary Katherine Swindoll and Clay Parker, respectively.

McElhanon’s initiative, “Rice — a Health Happy Hand,” touted the health benefits of budget-friendly rice, which she promoted through classroom visits and community events. She also enlisted support from a local judge, who signed a proclamation to make

McElhanon is part of a fifth-generation farming family in Arkansas. Although rice production has always been part of her community, she learned more about its importance while conducting rice promotions and serving as Miss St. Francis County Rice 2015.

To apply for the scholarship, high school students were required to develop a promotional program in their local community that highlighted U.S.-grown rice as part of National Rice Month in September. 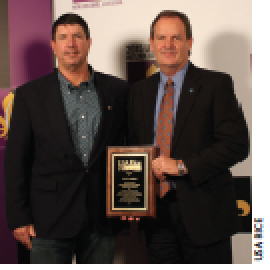 The industry-related class members are Sunny Bottoms of Horizon Ag, based in Dumas, Ark., and Kristopher Riggs with Anheuser-Busch in Jonesboro, Ark.

The class attends four one-week sessions over a two-year period designed to strengthen leadership skills, and they learn firsthand about all aspects of the rice industry.
Louisiana NRCS conservationist recognized for leadership

In making the presentation, Leo LeGrande, a California rice producer and USA Rice Farmers’ Conservation Committee chairman, praised Norton’s strong leadership.
After 26 years working in Oklahoma, Norton moved to Louisiana in 2007 and has encouraged the adoption of innovative practices beyond NRCS standards.

“Among fellow state conservatioinists, Kevin has been recognized as a strong leader,” LeGrande says. “Recently he spent 29 months detailed to the Senate Agriculture Committee to develop the Conservation Title of the 2014 Farm Bill and personally helped design the Regional Conservatioin Partnership Program.”

Norton says he was surprised by the award.

“When Leo called me, it really took me aback,” he says. “As a public servant, there is no greater or more humbling honor than to be recognized by your customers. And this is really special to me because rice is special to me.”