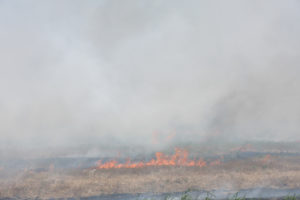 Farmers who want to burn crop residue, such as the wheat stubble pictured here or rice straw, are encouraged to follow the voluntary smoke management guidelines — photo courtesy University of Arkansas

Arkansas producers have only to look to California to see what can happen if they don’t follow a voluntary smoke management program and get their open-field burning under control.

“If we don’t make an active attempt to manage this issue, it will likely be managed for us,” says Jarrod Hardke, University of Arkansas Extension rice agronomist.

The issue isn’t limited to rice producers, either. Some soybean producers, for example, windrow crop residue and burn it to try to reduce pigweed seeds.

The smoke management program is simple. Before you set a field on fire, call the Agriculture Department Dispatch Center at 800-830-8015 to report your intentions.

You may told that it’s OK to burn, or you may receive a recommendation to only burn between a specific timeframe during the day when atmospheric conditions are conducive to dissipating the smoke.

If the winds are blowing toward a populated area or if too many producers have already registered to burn in a particular air basin, the dispatch center may recommend against burning that day.

Lauren Ward, executive director of the Arkansas Rice Federation, stresses that these are purely recommendations and that the program right now is voluntary. But she encourages growers to follow them as much as possible.

“Adopt it this year so you can avoid future regulations and red tape,” she told attendees of the recent Mississippi County water meeting.

Other smoke management recommendations include:

• DO NOT BURN if humidity is below 20 percent.

• DO NOT BURN when the wind direction could send smoke directly into roadways or communities.

• DO NOT leave your fire unattended.

Why the need for the program

Prompted by complaints from urban residents as well as pediatricians, nearly a dozen Arkansas agricultural groups met last winter to develop a voluntary smoke management program for farmers. Among those were the Arkansas Rice Federation, the Arkansas Agriculture Department, Arkansas Soybean Association, University of Arkansas and the Arkansas Farm Bureau.

Arkansas’ voluntary smoke management program was patterned after one already in existence for the timber industry.

In California, the Connelly-Areias-Chandler Rice Straw Burning Reduction Act of 1991 phased out open-field burning of rice straw as of 2000. The state legislation was the result of multiple complaints, including many from pediatricians, about health issues related to smoke in the fall. The Sacramento Valley, where the bulk of rice is grown, is prone to fall weather inversions that can trap smoke in the lower atmosphere.

The Arkansas Department of Agriculture has prepared this brief video highlighting the smoke management guidelines: