Despite a few road bumps, farmer-owned brewery is up and brewing 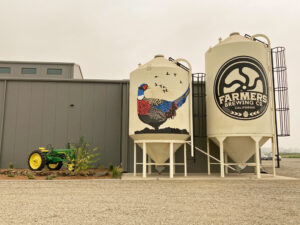 Despite delays caused by permitting and rain, Northern California rice producer and fifth-generation farmer Bill Weller finally began realizing his dream of producing farm-to-glass craft beers in his own brewery in January.

The 40-barrel Farmers Brewing facility is located on the family’s farming operation north of Princeton, with Weller growing the medium-grain Calrose rice, wheat and almonds that go into the various beers.

Much like the farm-to-plate or farm-to-fork movement, he sought the brewing industry’s version – farm-to-glass beverages. By growing many of the ingredients and making the beer himself, Weller could ensure the quality of the end product.

Initially, he had planned to distribute the beer in kegs or half kegs to restaurants throughout the region. But the COVID-19 pandemic and subsequent shutdown of eating establishments in March quickly caused Weller to pivot 180 degrees.

Installation of a canning line, originally scheduled for the end of this year, was pushed up. As Weller waited for the equipment to be shipped and installed, a mobile canning operation filled the void, producing six-packs for distribution to regional liquor and grocery stores.

Salesman Garth Archibald also had to act quickly to get the newly produced six-packs onto retailers’ shelves. 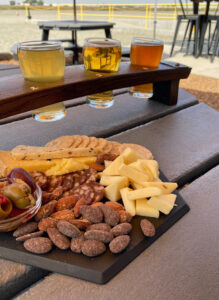 Sitting outside, I got to put four of Bill Weller’s beers to the test. They didn’t disappoint. A bonus was the cacophony from the ducks and geese in the flooded rice field across the road.

The canning line is finally operational, but as Weller joked recently, now the brewing industry faces a can shortage. On the bright side, he said, he started harvesting his medium-grain rice in late August and had already finished by late September – one of the earliest finishes he could remember.

Farmers Brewing also has a tasting facility that is open Thursday, Friday and Saturday. In accordance with COVID-19 regulations, visitors sit outside under shaded tables spaced at least 6 feet apart.

As a follow-up to the article I wrote about Farmers Brewing in the March 2019 issue, I had to visit the tasting room to check it out myself. What sets Weller’s brewery apart from others is it literally is on his farm. Visitors drive down paved County Road 66 through a walnut orchard, then take a right turn at the rice field onto County Road WW and head toward the 25,000-square-foot corrugated metal brewery and grain bins to their right.

In keeping with his original plan, Weller has a handful of year-round beers: Farmers Light, a premium light beer; 530, an unfiltered wheat beer; Valle, a Mexican-style lager; and Sun Up ‘til Sun Down, a session IPA. In addition, he and brewer Naga Reshi make small batches only available at the taproom as well as seasonal offerings, such as Planting, Summer Kickback and Harvest. 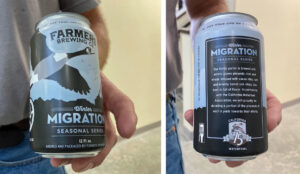 Migration Porter is set to be released in October. A portion of six-pack sales will go to the California Waterfowl Association.

Next up in the seasonal lineup is Migration, a porter scheduled for release in October that Weller says is full of flavor but isn’t so heavy it weighs you down. It contains estate-grown almonds, rice and wheat.

A portion of each six-pack sales will go to the California Waterfowl Association – a connection that’s a no-brainer.

During my recent visit, an earlier harvested rice field directly across the road from the tasting room had been flooded, and flocks of ducks and Canada geese enjoyed a smorgasbord of rice left after harvest and other small rice-field inhabitants.

The cacophony from the birds was music to my ears and paired nicely with the beers I was sampling.