The name says it all 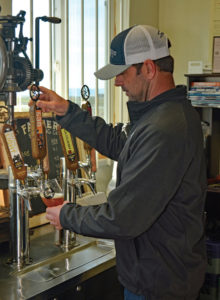 “I always wanted to do this, but we’ve been busy growing the farm over the past 22 years,” says Weller, a fifth-generation farmer who grows rice, wheat, almonds and walnuts with his brother near Princeton, California.

About eight years ago, he started brewing beer at home, and one thing led to another. If all goes according to the latest schedule, he will open the 40-barrel Farmers Brewing brewery later this summer on his Princeton farm.

Although wife Kristin says she was a bit hesitant at first, she and their two children are 100 percent behind Bill.

“I asked him, ‘Are you sure you want to do this?’” It’s a dream of his, and we fully support him,” she says. “It’s turning into a fun family business.”

Many of the visuals tied to his brand and even the operation’s name itself are nods to his agricultural roots.

The Farmers Brewing logo, for example, comes from an old manual drill press Weller used to play with as a kid.

Weller likes to refer to his craft brewing endeavor as “farm to glass,” since he grows the rice and wheat that goes into the beer. In the future, he also plans to produce other ingredients, such as barley and hops. 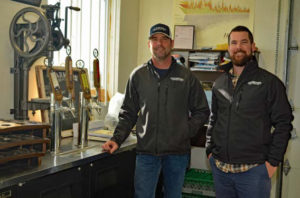 Garth Archibald, right, joined Farmers Brewing in sales as the brewery ramps up production. He is joined by owner Bill Weller.

But California association Managing Director Leia Ostermann Bailey did write in an email, “The drive to source local and drink local beer has certainly increased in conversations and marketing throughout the last several years.”

“The farm to glass is a significant part of the industry — it’s not a fringe,” he says. “But it’s not competing with domestic beer sales or craft beer sales, either.”

Admiral Maltings partners with California grain producers, and Silbertstein says many of his company’s 200 malt customers are increasingly paying attention to ingredients and local sources.

“I think a lot of people are using our malt because of that connection with the farmer,” he says. “I think there’s a segment that people are paying attention to — the provence of what the ingredients are.”

A handful of malting companies nationwide — such as Colorado Malting Co. of Alamosa, Colorado; Roots and Shoots of Loveland, Colorado; and Mecca Grade of Madras, Oregon — were actually started by farmers who wanted to add value to their grains, Silbertsein says. 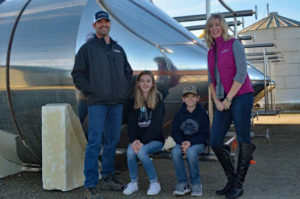 Bill Weller, far left, jumped at the chance to pick up a 40-barrel brewhouse in Phoenix. He is storing the tanks on his farm until brewery construction is completed. Joining him (from right) are wife Kristin, son Ryan and daughter Lauren.

Currently, Farmers Brewing has year-round offerings that include 530, an unfiltered wheat beer that plays up his area code; Daughter’s Wit, a Belgian-style wheat beer with a pink hue; Rattle Can American, An American amber ale; Farmer’s Light, a 99-calorie lager; Granjero, a Spanish ale; Valle, a Mexican lager whose name was thought up by the farm employees; and Stubborn Mule.

All were developed by Weller through a lot of trial and error, “especially with the rice because there’s just not a lot of information out there about brewing with rice,” he says. “I find there’s such an advantage to using it, plus we grow rice.”

The rice imparts a clean, crisp flavor that complements some of the other flavors he uses, like the lime zest in his Granjero ale or malted barley.

But it also means the brewer can’t make any mistakes because they’ll stand out to the consumer.
Weller says he probably made 50 trial batches of Farmer’s Light before he was satisfied with the recipe.

In addition, he plans to have four seasonal series — Harvest, Migration, Planting and Summer Kickback — that will rotate. As with his mainstay beers, each series has a story behind it.

Proudly made with rice

Ask Weller about the rice content of his individual beers, and he’s quick to respond. The Farmer’s Light, for example, contains more than 50 percent rice. Rattle Can Red is made with 20 percent rice.

And Stubborn Mule, a gluten-free carbonated alcoholic beverage flavored with ginger and lime and reminiscent of a Moscow Mule cocktail, is made with 100 percent rice.

The rice used in the beer is 100 percent California medium grain. What will make or break the beverage is the milling, Wellers says.

He only uses Musenmai or “no-wash” rice that has undergone polishing after milling to remove any left-over bran that sticks to the kernels. The fat in the bran can create undesirable off-flavors during fermentation.

For his Daughter’s Wit and 530, he uses barley and the low-protein soft white winter wheat grown in adjacent fields in addition his own medium-grain rice.

A brewery to ‘grow into’ 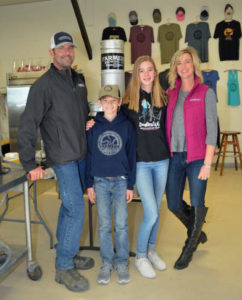 Farmers Brewing has become a family endeavor, with wife Kristin
handling online merchandising. Daughter Lauren is the namesake
behind Daughter’s Wit, and son Ryan is quick to hand out promotional items.

Currently, Weller has a small set-up in a refurbished building on their farm where he can brew slightly more than one 31-gallon barrel at a time. That beer is distributed in 1/6- and 1/2-barrel kegs to area restaurants and bars.

Garth Archibald recently joined Farmers Brewing to handle sales as the facility ramps up production. Weller also is in the process of hiring a brewmaster to oversee beer production.

His original plan was to scale up to a seven-barrel facility. But when he found a 40-barrel brewhouse in Phoenix, Arizona, for sale, he jumped at the chance.

The brewhouse, fermenters and 23 tanks had been unattended for several years and had become the victims of metal thieves, who stole several of the copper fittings.

Nevertheless, Weller hauled them to his farm in July 2017, where they were refurbished. He also has picked up other equipment from other breweries and boasts he has components from five brewing operations.

Squeezed in his equipment sheds among typical farm implements and four-wheelers are pieces of the equipment, such as a centrifuge used to clarify the beverage and remove solids after fermentation.
Weller jokes that he’s over-building his facility, but he couldn’t pass up the deal on the stainless steel tanks.

“Everybody I talked to said, ‘Man, I wished we would have started bigger,’” he says. “With me, I’m going to try to grow into this facility.”

Even before he began distributing beer from his small brewery, Weller had to obtain beer manufacturing and distribution licenses from the California Department of Alcohol Beverage Control.

He also had to have his labels approved by the federal Alcohol and Tobacco Tax and Trade Bureau.

Weller says he had hoped to be operational by now, but permitting – both on a state and local level — delayed construction.
“You know California — it’s brutal,” he says.

Take the wastewater that will be generated during the brewing process and maintenance. Weller had to obtain a wastewater discharge waiver.

As part of the application, he had to develop a plan that detailed how he would collect and store it in a large tank, then use it to irrigate adjacent cropland.

Weller received his last permit in November 2018. By the end of January, crews were pouring the concrete foundation. But continuing winter rains likely will slow construction and push back completion until early this summer, he says.

Further down the road are plans to install a small canning line and open a tasting room in the brewery.