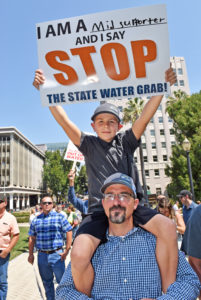 More than 1,500 farmers, community leaders and urbanites attending an Aug. 20 rally sent a passionate message to the California State Water Board about their disgust with its proposed unimpaired San Joaquin River flows.

The event — organized by Assemblyman Adam Gray, D-Merced, and held on the steps of the state Capitol in Sacramento — was to draw attention to the effects the proposal would have on the fragile Central Valley economy, which relies on agriculture as its No. 1 industry.

Speaker after speaker pointed out the flawed science as well as a lack of transparency behind the proposal. In between, the crowd chanted “stop the water grab” or “fight, fight, fight.”

“Are we going to allow three people on the board to decide a multi-billion-dollar economy and to make this decision?” Rep. Doug LaMalfa, R-Richvale, and a fourth-generation rice farmer, asked the crowd. “Are we going to hold accountable those people who put those bureaucrats in place?

“We have to stop these people in their tracks. We have Republicans and Democrats standing here – farmers and farm workers standing here today. We have rural (areas) united with San Francisco because, under this plan if they’re allowed to do what they want, it will cut San Francisco to 20 gallons (a person) a day.”

The board has said additional water is needed to halt the decline of several endangered species of fish, including chinook salmon. During previous hearings, several groups representing fisheries have asked the board to increase flows beyond the proposed 40 percent level.

They contend the increased water is needed to make up for decades of meager flows that have all but decimated native-run salmon.

They also have conducted studies that found well-timed pulse flows of water do more to help salmon than unimpaired flows would. Yet the board has ignored the data, water managers say.

The proposal requires each San Joaquin River tributary maintain an average of 40 percent unimpaired flow — or 288,000 acre-feet between Feb. 1 and June 30. Within those months, the flows could range from 30 to 50 percent — 174,000 to 485,000 acre-feet — under an “adaptive” management program to meet fishes’ lifecycle needs.

The state defines unimpaired flows as surface water that would accumulate from precipitation and flow downstream if there were no reservoirs or diversions to change the quantity or timing.

During a wet year, water district managers have said the proposed flows would have minimal impacts. But they could be devastating during years with below-average rain and snow.

In previous documents, the water board has acknowledged the hardships but said much of the impact could be mitigated by farmers pumping more groundwater.

That belief counters the Sustainable Groundwater Management Act, signed into law by Gov. Jerry Brown in September 2014. Under that legislation, groundwater basins must balance extraction with recharge by 2042. Many of those basins currently suffer from groundwater overdraft.

Phase 2, which addresses the Sacramento River and its main tributaries, is a year or two behind. Already, the board has said it is studying unimpaired flows of up to 65 percent as well as cold water temperature targets. Nearly all of California’s rice production is in the Sacramento River watershed.

The water board had been scheduled to conduct a two-day hearing on its latest proposal and adopt the measure on Aug. 22. But an Aug. 15 agenda showed the board would still accept oral comments on the proposal but would adopt the measure at a future date.

Adam Boles, a walnut grower and rice buyer who lives near Hamilton City, is far from the Lower San Joaquin River. But he and daughter Claire journeyed to the Capitol to support fellow farmers because he said he knows the next phase will affect his region.

“They’re talking about impacting the tributaries of the Sacramento as well,” Boles said. “The water grab is not going to be isolated to just one spot. They’re trying to get it from all of us.”