With harvest past midway in Louisiana, yields look good 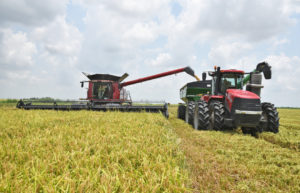 The 2018 rice harvest in southwest Louisiana is past the halfway point, and Louisiana State University AgCenter agents say farmers are pleased.

Dry weather allowed most farmers to get into the fields during the past week, and the harvest progressed well. “I would think we’re probably close to 65 to 70 percent complete,” he says.

Lower yields could be the result of weed problems and issues that delayed fertilizer applications, he says.

Todd Fontenot, AgCenter agent in Evangeline Parish, estimates that two-thirds of the rice there has been harvested.

“Overall, the numbers are good,” he says.

A surprise has been the performance of the new Provisia rice variety PVL01. It was not expected to yield well but provide farmers with an option to fight weedy rice that could be controlled with the Provisia herbicide.

Provisia yields in the mid-40-barrel range have been common, Groth says.

Performance of the new Amistar Top fungicide has been disappointing, although it performed well in previous years in small plots. It seemed to work well when used with another fungicide, Tilt, and it may require earlier applications, he says.

More smut disease than normal has been showing up, but fewer farmers have reported bad outbreaks of blast, Cercospora or sheath blight diseases, Groth says.

“Every year is unique, and we learn something new every year,” he says. 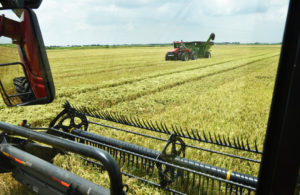 A cart pulled by a tractor approaches a combine in a rice field in Acadia Parish. Farmers are reporting good yields, although rain has occasionally interfered with their progress.

Frances Guidry, AgCenter agent in Jefferson Davis Parish, says 60 to 70 percent of the crop has been cut, but bad weather interfered with farmers’ progress.

“Rain for seven days straight set them back,” she says.

Yields in the low- to mid-40s are common, Guidry says.

AgCenter Extension rice specialist Dustin Harrell says yields are better than in the past three years. Weather played a big part in this year’s good crop.

Dry weather early in the season reduced chances for disease, he says, and weather conditions were ideal for pollination.

It’s possible the year could even set a harvest record.

“It just depends on if these yields hold up on our later-planted rice,” Harrell says.

Andrew Granger, AgCenter agent in Vermilion Parish, says yields there have been good, with most fields exceeding 40 barrels per acre.

“It’s been a good year,” Granger says. “With a couple of breaks in the weather, we got a lot of rice out.”

Provisia has yielded better than anticipated, but its maturity has been uneven within the same field, he says.

Granger estimated that about half of the rice acreage will be used to grow a second crop, “just because the conditions have been so good.”

“I think the rice looks good up here. We’ve got potential for a good crop,” he says.

Four consecutive days of rain have held up rice harvest. “That’s going to delay us probably until the end of the week,” Collins says.