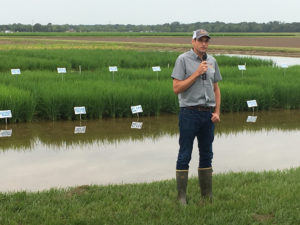 The Louisiana State University AgCenter breeding program continues on a roll with the potential release of a new Clearfield long-grain variety as well as a conventional long-grain in time for the 2020 season. If that comes to fruition, they would be grown for seed next season and be available commercially in 2021.

He, as well as several other AgCenter researchers, showed off their projects during the recent Rice Field Day at the H. Rouse Caffey Rice Research Center in Crowley.

For the past two to three years, Famoso has compared the field performance of CL2097 to CL2195, both long-grain Clearfield candidate varieties from the LSU program. CL2097 consistently out-yielded CL153, a current commercial Clearfield long-grain variety, by 5%. Although CL2195 has only out-yielded CL153 by about 3%, it has better milling quality than CL2097.

Both varieties are undergoing seed increase at the rice station this season. They also are in 20 variety tests throughout the state, he said.

Any decision to release one of the candidates for commercial production will come after harvest when yield data are reviewed.

“We will look very closely in the end at grain quality,” Famoso said.

He also has a conventional line made from a cross of Cheniere, an LSU long-grain variety known for high grain quality, and Mermentau.

“There’s nothing too surprising in terms of agronomy or management,” Famoso said. “But the big advantage over the last three years is a very consistent yield advantage over Cheniere. In the last two years, it’s yielded 8-10% more than Cheniere.

PVL02, a Provisia long-grain rice variety released earlier this year for seed production, should be commercially available in limited quantities to plant about 50,000 acres for the 2020 season. It has been bred using traditional techniques to tolerate over-the-top applications of Provisia herbicide, bringing a new mode of action to control red rice. Provisia herbicide also is effective against Clearfield-resistant weedy rice and ALS-resistant grasses.

In some of his trials, LSU AgCenter weed scientist Eric Webster evaluated the Provisia tolerance of the current PVL01 Provisia variety to the new PVL02. Although he said growers will always see some crop injury from Provisia herbicide, the new release appears to tolerate the herbicide better than the first variety.

In most cases, the plants are able to outgrow any early injury and it doesn’t appear to have a significant effect on yield.

The AgCenter continues work to develop hybrids with both high yields and high grain quality. It released the first long-grain hybrid, LAH169, in March 2018 and is currently in discussions with a partner that will bring it to market.

Although hybrids may out-yield conventional varieties by 10-30% per acre, they may not necessarily provide a grower with better net returns.

“Under certain circumstances, a hybrid can give you a higher net return per acre,” said Jim Oard, who’s leading the AgCenter’s hybrid work.

In the meantime, Oard has developed CLH161, a hybrid similar to LAH169 but with the Clearfield trait.

In addition, he has three potential Clearfield hybrids and four conventional hybrids that aren’t as far along.

Hybrids carry genetic material from both Indica and Japonica rice varieties. In the United States, Indica varieties are mainly grown in the South whereas Japonica are mostly grown in California.

“You get the yield kick from the Indica,” he said. ‘Along with the yield, you get a lot of the things you don’t like like dormancy and pubescence. We’re trying to breed that tout. We don’t notice any more dormancy issues than the commercial hybrids.” 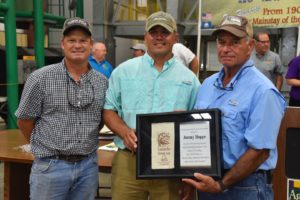 (from left) Paul Johnson, chairman of the Louisiana Rice Growers Association, and Michael Fruge, past chairman, presented a special award to Jimmy Hoppe in recognition of his unwavering support of the Louisiana rice industry.

If you’ve ever received a 1-pound cloth bag of Louisiana aromatic rice with industry facts and figures on the back, you probably have Jimmy Hoppe – an Iowa, Louisiana, rice producer — to thank.

For decades, he individually bagged the rice to hand out and help promote the Louisiana rice industry.

To thank Hoppe for his unwavering industry support and generosity throughout the years, the Louisiana Rice Growers Association honored him with a special award that included one of his own framed rice bags.

“Up until his retirement, he’s been the one who has filled all of those bags over the years and the countless bags of Louisiana rice that have been handed out in the state and throughout the U.S.,” said Paul Johnson, a Welsh-area rice producer and chairman of the growers association.

During the presentation at the LSU AgCenter Rice Field Day, Johnson also praised Hoppe’s leadership as a long-time member of the Louisiana Rice Council and Louisiana Rice Promotion Board.