The ‘Year of Weedy Rice’

Infestations point out need for Provisia system to clean up fields. 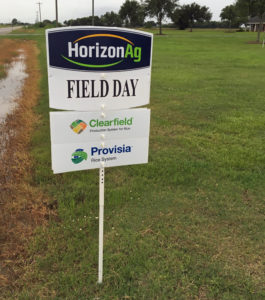 2019 could very well be dubbed the “year of weedy rice” — at least in Southwest Louisiana. Even growers who have been diligent about rogueing Clearfield rice fields or rotating to soybeans have seen more weedy rice than usual.

The jury is still out on the cause, but Michael Fruge, a Horizon Ag district field representative for South Texas and Southwest Louisiana, said it points to the need for the new Provisia Rice System.

“A lot of farmers during the last few weeks have seen more weedy rice than they ever had, so it’s getting exponentially worse. It seems that the rate of those spots (of weedy rice) is growing,” Fruge told attendees at the recent Horizon Ag field tour near Kaplan, Louisiana.

But in fields where growers have been diligent about rotating and keeping weedy rice at bay, the Clearfield system still works, he said.

“You’ve heard a lot about Provisia, but there are still a lot of acres in South Louisiana and especially when you go north where you can rotate with soybeans where we have years left with the Clearfield system,” Walker told field day attendees.

In fact, the Louisiana State University AgCenter has two Clearfield long-grain candidate varieties and will decide which one to release after this year’s yield data are compiled.

2018 was the first year the Provisia technology was available on a commercial scale. The PVL01 long-grain rice variety, developed by the LSU AgCenter, was bred using traditional techniques to tolerate over-the-top applications of Provisia herbicide from BASF.

Although PVL01 yielded slightly less than other Clearfield or conventional varieties, it excelled in fields with particularly bad weedy rice problems.

“It will compete with any weedy rice pressure, and you can start to clean up the problem,” Fruge said.

The next long-grain variety — PVL02 — should have about a 10% yield boost and a better disease package, said Dr. Adam Famoso, LSU AgCenter rice breeder. It should be commercially available in 2020.

PVL02 is paired with Provisia herbicide, an ACCase that belongs to the Weed Science Society of America Group 1.
Newpath, Clearpath and Beyond, on the other hand, are imidazolinone herbicides paired with Clearfield rice. They belong to the WSSA Group 2 ALS herbicides.

As with many new systems, Fruge, said, growers and consultants learned a lot about how to manage the Provisia system during the 2018 season.

Provisia applications, for example, are best made during warmer temperatures when the rice is actively growing. During 2018, many growers applied the herbicide to stressed rice, and the weather subsequently turned cooler. They experienced some crop response, although the rice appeared to grow out of it.

Because Provisia is a contact herbicide, it should be applied with at least 10 gallons of water per acre for improved coverage, and 15 gpa is even better, he said.

PVL01 is susceptible to both blast and sheath blight, with two fungicide applications recommended. As with the herbicides, higher spray volumes improve contact and help the fungicide penetrate the canopy.

“Timing (of the fungicide) is very important for blast,” Fruge said. “With two shots of fungicide, you have a better chance of hitting that timing.”

Provisia varieties in the pipeline

This season, Horizon Ag has a few demonstration fields of PVL02 in South Louisiana, Arkansas and Missouri. It should be available commercially on a limited basis for the 2020 season.

The newcomer is seven days earlier than PVL01 and has improved milling of over 60% head rice. PVL01 typically averages in the mid-50% head rice, Fruge said.

Because the PVL01 kernel was so long, it tended to break off during milling. PVL02 still has the same clear kernel and low chalk as PVL01 but a slightly shorter kernel.

Unlike the inaugural Provisia variety, PVL02 also is less susceptible to blast, but it still requires a fungicide treatment.

The development of Provisia varieties is following a path similar to that taken to commercialize Clearfield rice, Famoso said. Since the first Clearfield variety was released commercially in 2002, the varieties have seen progressive improvements.

“We certainly don’t expect PVL02 to be the final variety,” Famoso said. “We do have additional Provisia lines in the pipeline.”

Moving forward, the subsequent Provisia releases will have different genetics than the first two varieties, which are siblings.

He expects the next generation will be available in two to three years.

“Our big focus going forward is obviously continuing on yield but also to get improved blast resistance,” he said.

After three years of testing, CL2097 has yielded 5-8% better than CL153 — the industry standard for Clearfield varieties — and has strong blast resistance. But the candidate has a bit more chalk and a slightly shorter kernel.

Famoso has both varieties in seed increase this year. Based on how the varieties perform this season, he said he hopes to release one for seed production for 2020. It would be commercially available for the 2021 season.