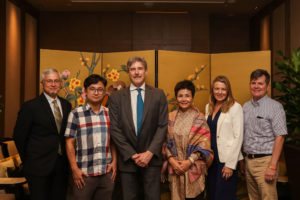 After decades chasing the enormous China market, a sale of U.S. rice was confirmed last week.

“This sale marks a turning point for the U.S. rice industry and its relationship with China as the it is the first ever of U.S. rice to a private importer and is truly historic as it sets the stage for continued regular trade with China for U.S. grown rice.” said USA Rice President & CEO Betsy Ward.

The deal occurred on the margins of the first U.S. rice trade seminar in China that was conducted with funds from the new U.S. Department of Agriculture’s Agricultural Trade Promotion program. Five U.S. companies met with 15 of China’s top rice importers who expressed a great deal of interest in U.S. rice.

“Fifteen years of patience and hard work have paid off,” said Ken LaGrande, founder of LaGrande Family Foods Group and CEO of Sun Valley Rice, the company that made the sale. “It is truly an honor and a privilege to blaze this trail of trading history – American rice in China. Our team has worked with incredible tenacity and diligence to reach this point.”

“It has been a long journey,” said Steve Vargas, senior vice president of global rice trading for Sun Valley Rice and vice chair of the USA Rice International Promotion Committee. “It has taken a great deal of effort on the part of Sun Valley Rice, as well as the USA Rice Federation, to gain access to the Chinese market.”

During the seminar, USA Rice was formally introduced by USDA’s Minister-Counselor Bobby Richey and Jim Guinn, USA Rice director of Asia promotion programs. The five USA Rice members discussed their capabilities to service the Chinese market. This was followed by a “speed dating” event, where importers met one on one for 15 minutes with each of the represented exporters before attending a closing dinner with nearly 50 Chinese importers.

USA Rice conducted this seminar during the World Rice Summit trade show where a booth showcased cooked samples of five different types of U.S. rice: long grain, Koshihikari, Calhikari, Calrose and sweet rice. Additionally, each of the five U.S. exporters had their own station to meet with interested importers.

USA Rice will hold two additional trade seminars this year, Aug. 2 and Aug. 5, in Shanghai and Shenzhen, respectively, and interested exporters are encouraged to contact Guinn about participating.