Corn and soybeans offered no spillover help as the milder weather and scattered rains in key states pressured those markets. It was also a week of positioning ahead of the upcoming Aug. 12 U.S. Department of Agriculture supply/demand and crop production reports.

New crop long-grain rough rice sales now total 50,300 mt with a sale of 33,800 mt to Mexico added last week. Total long-grain sales (rough, milled and brown) for the 2021/22 marketing year are now 121,433 mt ahead of last year. Nearly all of the increase can be attributed to the recent sales to Iraq.

Turning to old crop (20/21), there were no net sales of long-grain rough or milled rice reported last week. With just two days of data left to report in the 2020/21 marketing year, total long-grain shipments are 2% ahead of last year. This could indicate a slight adjustment higher is ahead in USDA’s old crop export estimate.

September rice futures now trade very near the 100-day moving average at $13.32 and also in the middle of this summer’s trading range between $14.21 and $12.50. The contract also seems to be consolidating in a wedge pattern, which it is unlikely to break out of before next week’s Aug. 12 World Agricultural Supply and Demand Estimates. This “wedge” provides trendline support near $13.10 and trendline resistance around the $13.78 to $13.80 area. 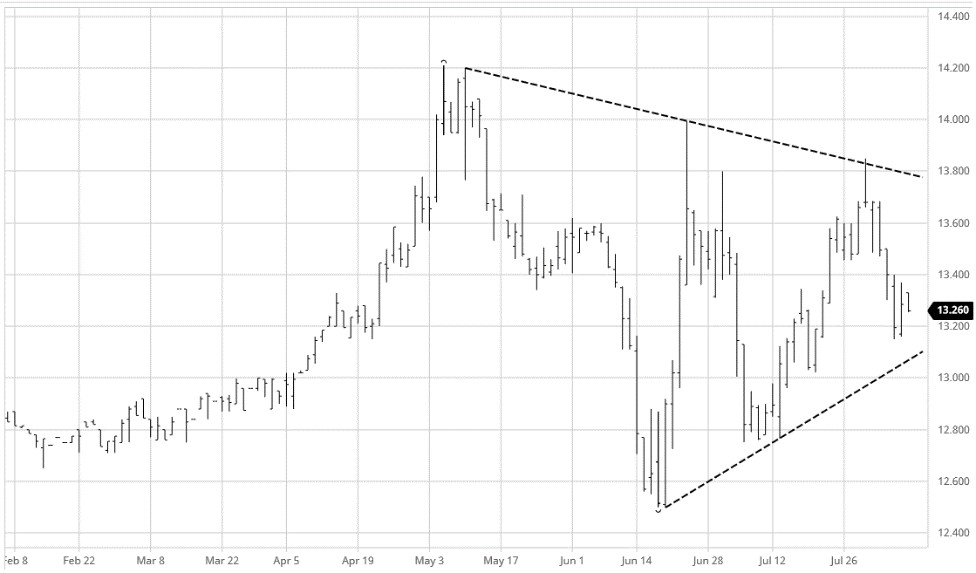 To see an upside breakout from the wedge, the market needs some confirmation that current acreage estimates are too high. Some insight on that may begin to show up next week in FSA’s certified acreage reporting.

Also, it’s no mystery that crop development is delayed in the long-grain states. In Monday’s crop progress, Arkansas’ was at 49% heading — 15 points behind the five-year average of 64%. Also, Louisiana was at 13% harvested and Texas at 7% against their respective five-year averages of 25% and 14% harvested.

Next week there’s likely to be more discussion on tropical weather. The National Oceanic and Atmospheric Administration Hurricane Center issued a statement this week expecting the tropics to be more active than previously thought, with 15 to 21 named storms and seven to 10 hurricanes, of which three to five are supposed to be major ones. There’s plenty to keep the rice market nervous until the 2021 harvest winds to a close.