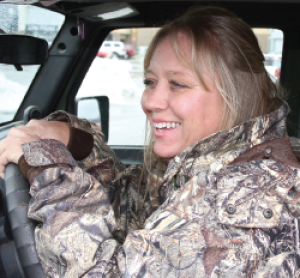 I began my career as a field scout in 1990 and started my consulting business – ABD Crop Consultants, LLC – in 1996. In 2015, I celebrated 25 years of checking rice in the Missouri Bootheel.

Last year’s wet spring and slow start were very similar to the 2013 season. The majority of the rice was planted in May, and my farmers weren’t able to prepare the ground as well as they would have liked in some cases. Because of these conditions, about 25 percent of my acres were water-seeded. We flew seed into fields with established ducksalad and leftover winter vegetation with the hope that we could clean them up.
On the conventional water-seeded fields, we applied Grasp Xtra alone. Where Clearfield rice was planted, we mixed Grasp Xtra with Beyond to clean up the ducksalad and mud plantain. There are some synergistic qualities that occur when combining Grasp Xtra and Beyond that result in a quicker burndown on the aquatics. In water-seeded fields, I like to apply herbicides when the rice has pegged down and is actively growing.

Although aquatics were our main target weed, we also went after barnyardgrass that had emerged during a warm spell. We were very satisfied with the control that we got with 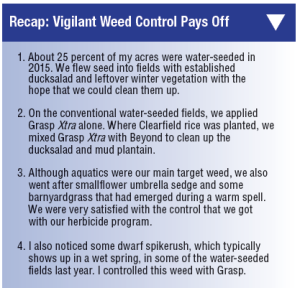 our herbicide program and will definitely be using more Grasp Xtra this year.

Smallflower umbrella sedge was also present in some of the fields that we sprayed. If there is any sedge in the field, I always assume that some portion of it is umbrella sedge because it looks a lot like rice flatsedge until it gets a head on it. The nature of umbrella sedge is for one flush to come up with a lot of small plants underneath. It’s difficult to get good coverage with a plane because it uses less water than a ground rig does. When this occurs, it’s more of a coverage issue than a resistance issue. In this case, we may need to make two applications with a plane. I also noticed some dwarf spikerush, which typically shows up in a wet spring, in some of the water-seeded fields last year. I controlled this weed with Grasp. I was glad to find a herbicide that worked because dwarf spikerush has productive seed heads, spreads out in patches and chokes out the rice, whether it is drill-seeded or water-seeded.

One of the main things I learned in regard to weed control last year is to apply pre-emerge herbicides as much as you can, where you can. In 2015, we tried to cut corners to save a penny, but cost ourselves a dollar. Another observation is if at all
possible, do not water-seed. A lot of things can go wrong, and we don’t have the option to go back in and use a ground rig unless the field dries up completely and we start over.

Farmers are realists and understand their situation. They also are optimists. When planting time rolls around, they have faith that everything will work out in the upcoming season.