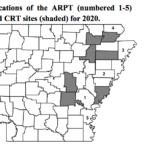 The University of Arkansas recently published cultural performance data from the Arkansas Rice Performance Trials (ARPT), Commercial Rice Trials (CRT) in grower fields and from seeding date studies conducted during 2018-2020. These studies are supported through grower check-off funds administered by the Arkansas Rice Research and Promotion Board. Additional information can be found on the Extension rice website (http://www.uaex.edu/rice) and ... END_OF_DOCUMENT_TOKEN_TO_BE_REPLACED

In 2015, University of California Cooperative Extension began the UCCE Rice Yield Contest as a pilot study in Butte county. Due to the success of the pilot study, the contest in 2016 was expanded to include all of Sacramento Valley. Due to possible yield potential differences, the valley was separated into four regions using Highway 20 and the Sacramento River ... END_OF_DOCUMENT_TOKEN_TO_BE_REPLACED

By Bruce Linquist In 2015, the University of California Cooperative Extension kicked off a yield contest with rice growers. The purpose was to provide an opportunity for rice producers and UC scientists to share information about intensive rice production in California and to recognize individuals who have achieved the highest yields. END_OF_DOCUMENT_TOKEN_TO_BE_REPLACED