Mercosur ships rice at more competitive prices the first half of the year when it is off-season in the United States and Southeast Asia.

Over the past years, the ever increasing share of Mercosur countries, as major suppliers of rice to the international market, has captured the attention of the traditional players. The recognized quality of the cereal, offered at more competitive prices in the first half of the year (when it is off-season in the United States and Southeast Asia) helps consolidate Argentina, Brazil and Uruguay as relevant exporters.

Production instability and volatility of the competitive conditions are, on the other hand, harmful factors, which need to be dealt with jointly to ensure stable supplies and the maintenance of the markets conquered with great effort.

As a result of the prolonged drought that hit the region, Argentina, Brazil and Uruguay harvested a crop that was down 14.1 percent from the previous year. The smaller volume was partly compensated by the initial bigger stock position, but the impact on the performance of exports was inevitable. Tighter supplies of the cereal pushed up prices in the domestic market, reducing Mercosur’s competitiveness in the international marketplace.

Feb. 10 to March 10, 2013, the Mercosur bloc shipped abroad 2.6 million tons of rice (in the husk). Disregarding the trade between countries, the volume is down 29 percent from the previous year. The soaring value of the cereal in the Brazilian domestic market prompted Argentina and Uruguay to ship more rice to their neighboring country, especially in the second half of the year. Other South American countries, like Peru and Venezuela, and the Middle East, particularly Iraq, were also the destination of the cereal. 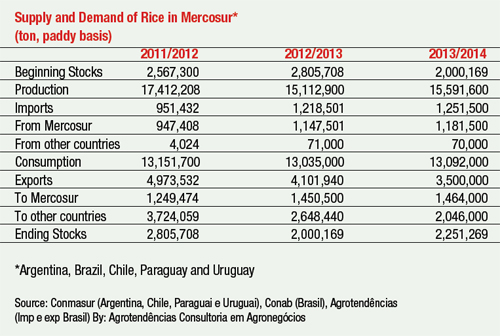 Currently, Mercosur countries are halfway through the harvest of a new crop, and the expectation is for a crop similar in size to last year. In Uruguay and Argentina, the planted area was slightly smaller than last year, mostly because of the big increase in production costs. In Brazil, the higher price of the cereal accounted for a minor increase in the planted area. Therefore, there will be a kind of compensation between the smaller planted areas in Argentina and Uruguay and the bigger area in Brazil.

It is also worth highlighting the incredible increase of Paraguay’s crop. For this year, the expectation is for the Paraguayan rice farmers to harvest a crop of upwards of 600,000 tons of rice in the husk, meaning an increase of 28 percent compared to the previous crop, or 54 percent more than the volume produced two years ago. Taking advantage of its geographic proximity, Paraguay’s major importer is Brazil, now playing a fundamental role for the neighboring country to keep its sales abroad.

The smaller initial stocks and the farmers in a little better financial condition should sustain the prices of rough rice at a level above the USD $300/ton (farm gate price) and the volume shipped abroad is likely to be smaller again. Although having increased its share of milled rice (white and parboiled) in shipments abroad over the past two years, Brazil is likely to resume its major business of selling broken rice to West African countries.

For one more year, Brazil will continue being the country that best remunerates the rice from Uruguay and Argentina, especially in the second half of the year, but the two countries will continue shipping their product to Peru, Iraq and Venezuela.