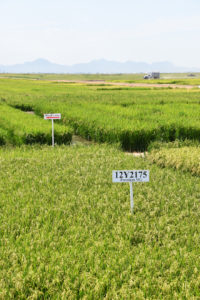 M-211, known as 12Y2175 during breeding, is a premium Calrose-type medium grain recently released for seed production by the California Rice Experiment Station.

The California Cooperative Rice Research Foundation Inc. has approved the release of two new varieties from the Rice Experiment Station.

The medium-grain M-211 and long-grain L-208 will be sold for seed production this season and available commercially for growers for the 2021 season. Both were developed by a breeding team at the California Rice Experiment Station in Biggs, California, led by Dr. V.C. “Butz” Andaya. Other members of the team are Drs. Teresa De Leon, Shyamal Talukder and Cynthia Andaya.

The grower-funded Cooperative Rice Research Foundation, which owns the experiment station, will apply for U.S. Plant Utility Patents for both varieties. They also will be available exclusively to California rice growers. As such, export of seed is prohibited, and any breeding or genetic research first requires a Material Transfer Agreement.

The new variety is adapted to the warmer growing regions of Northern California. “It’s not a variety for Davis or cold locations,” McKenzie says. “If you go to the correct environment, it’s a good choice.”

Formerly designated as 12Y2175, M-211 has a complex pedigree that includes a number of Calrose varieties as well as the premium medium grain, M-401. The result is what McKenzie describes as a “premium Calrose.”

Historically, the Rice Experiment Station has referred to longer-season medium-grain varieties that cook up very soft, have a shiny grain and a different grain texture than Calrose as “premium medium-grains,” McKenzie says. M-401 is the most widely grown premium medium grain in the state.

Because M-211 has many Calrose characteristics but cooks more like M-401, it’s been described as a premium Calrose, he says.
In 2018, 19 individuals from six external organizations were asked to blindly grade the potential new release for a number of factors, such as grain appearance and cooking characteristics. Out of the 19, 18 responded favorably.

The new variety also was evaluated by mills and marketing organizations for its cooking quality and received unanimous ratings for high market acceptability.

Although long-grain varieties occupy only a small percentage of California’s total acreage, Rice Experiment Station breeders continue to develop and release these new, improved grain types to diversify the portfolio.

L-208 has the same pedigree as L-207 but with earlier maturity, shorter plant height and increased yield potential.

It is adapted to the Sacramento Valley’s warmer production areas and is not recommended for cool or cold rice-producing environments.