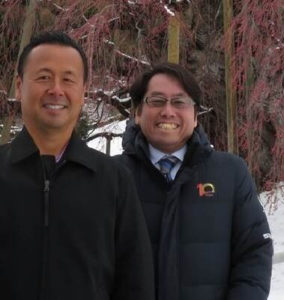 Rice harvested at Koda Farms, a Japanese-founded farm in Merced County, California, is being used to make saké at a brewery in the Japan Fukushima Prefecture city of Nihonmatsu. Koda Farms entered into an arrangement with the brewery, Ninki Shuzo, to provide ingredients for two new premium rice wines dubbed “Uka.”

Ross Koda, a third-generation farmer who currently manages Koda Farms, had the original idea to produce saké using his operation’s organic rice and sought the advice and assistance of Yujin Yusa, president of Ninki Shuzo.

The rice Koda selected for the saké-brewing project are two varieties grown organically, Kokuho Rose and Calhikari. The Kokuho Rose heirloom variety is not considered suitable for saké brewing. However, the brewery spent a long time polishing the rice, removing 60% of the grain’s outer layers to make a premium saké with a sophisticated, well-balanced flavor. The saké made from Calhikari tastes refreshing and crisp, according to the brewery.

“I was passionate about creating good quality saké using our rice, and I think we accomplished that,” Koda said. “My late grandfather, Keisaburo Koda, was dedicated to promoting relations between the U.S. and Japan, and I am seeking to do the same with this saké.”

Ninki Shuzo tentatively plans to launch its Uka saké in the United States in October.