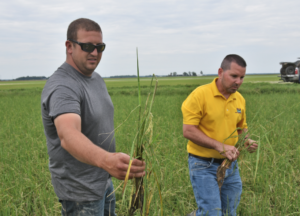 Rice plants are recovering from a hailstorm last week, but yield losses are expected in some fields.

The storm hit on the night of May 26. The National Weather Service indicated hail up to 2 inches in diameter fell on a 200-square-mile area of southwest Louisiana, mostly north of Welsh and Jennings. Hail also was reported in northern Acadia Parish.

“It’s really unfortunate we have such extensive hail damage in the region,” said Louisiana State University AgCenter rice specialist Dustin Harrell. “The rice crop prior to the hail looked excellent.”

Crop consultant Blake Buller said some fields of young rice are showing signs of recovery in the week since the hailstorm. “It bounced back quite a bit,” he said.

But other fields in the area that were planted early sustained heavier damage because the emerging panicles were badly damaged by the hail stones, Buller said.

“The most important variable we can look at is the maturity of the rice,” Harrell said.

Rice that was at the green ring to panicle differentiation stage suffered extensive leaf damage, and yield losses of 10% to 15% are possible, he said.

Rice that was in the boot to heading stages will suffer the most damage because the growing point was injured, and panicles could be void of grain. “I would say the yield potential would be similar to a ratoon crop yield,” Harrell said. 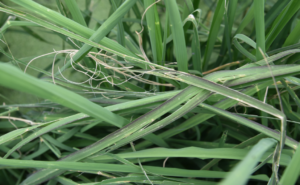 A rice plant damaged by hail

Damaged leaves will also serve as a conduit for disease to enter plants.

Some fields had been recently planted before the storm, and the seedlings were beaten down badly. Stands of conventional rice with surviving plants with fewer than 10 plants per square foot will see significantly reduce yield, he said.

Adverse weather from Hurricane Barry resulted in crop damage last year on a much larger scale than the recent hail storm. Barry hit on July 13, 2019, and much of the rice crop was damaged by wind that affected yields.

Early this week, forecasters have warned that Tropical Storm Cristobal could be headed to Louisiana.