A change of mindset

For effective weed control, treat row rice as you would any other row crop. 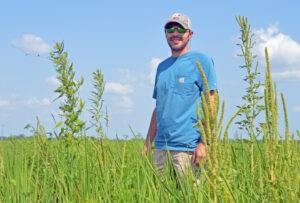 To successfully control weeds in furrow-irrigated rice ­— also known as row rice — growers will need to change from treating it like a flooded crop to managing it like they would any other row crop.

“Based on our observations, if you’re going to grow row rice, you’re going to have to treat it like a row crop and have a residual in with every (herbicide) application,” said Seale, who is working under academic advisor and Mississippi State University weed scientist Jason Bond.

University of Arkansas and Louisiana State University AgCenter researchers have also had trials looking at weed control of row rice and have drawn similar conclusions.

A focus on top 2 troublesome weeds

For the past two years, Seale has been conducting small-plot research trials on programs to control barnyardgrass and Palmer amaranth, the two most problematic weeds in row rice. He also is comparing herbicide programs targeting those two weeds in Clearfield and non-Clearfield conventional rice systems. He plans to repeat the field trials again this season.

As part of his dissertation, Seale said he also will conduct an economic analysis of the different herbicide treatments.

In a typical row-rice field, growers board up the bottom of the field, catching and backing up irrigation water flowing down the furrows. As a result, the field is naturally divided into three wetting zones. The bottom zone retains a permanent flood and is comparable to a conventional flooded field. The middle zone stays somewhat soupy, much like fields irrigated using alternate wetting and drying. And the top zone, which is wetted with the irrigation but dries out completely between sets, is where Seale focused his research. 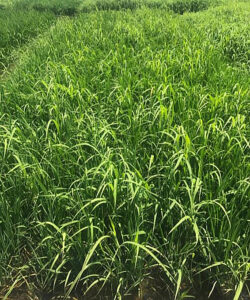 Barnyardgrass is the No. 1 weedy pest of rice, whether it’s under a continuous flood or grown with furrow irrigation — photos by Tommy Butts, University of Arkansas

All plots received a preplant application of clomazone, and all were planted to the variety CL-153. Seale’s work involved four studies — three that evaluated barnyardgrass control and one with Palmer amaranth control.

Of the three dealing with barnyardgrass, two focused on the post timing of clomazone in the form of RiceOne for non-Clearfield and Clearfield systems. Non-Clearfield treatments used RiceBeaux + Stam + Facet L in the first post and Regiment in the second post. 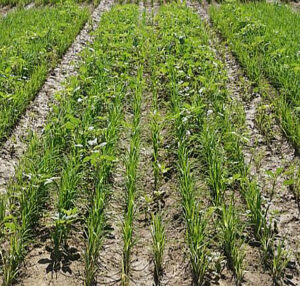 Without a flood to suppress Palmer pigweed germination, the weed can take over a row-rice field.

“Basically, the longer you wait before you apply your initial application (first post), the more sequential applications you will need to apply to control these weeds,” Seale said.

These two timing studies did not receive a pre application and were simply focused on post treatments. His research is being supported by the Mississippi Rice Promotion Board. 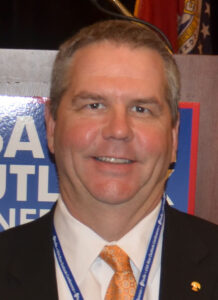 The trials were planted to Gemini 214 CL, a Clearfield hybrid. All plots received Command applied at 12.5 ounces per acre as a preemerge right before planting.

This was followed at the one- to two-leaf rice stage with an early post application that included a residual. Treatments were Newpath + a split rate of Command, Newpath + Prowl, Newpath + RiceOne (a premix of clomazone and Prowl), Newpath + Gambit and Clearpath (a premix of Newpath and quinclorac).

He then compared those treatments with and without a late post application of Newpath + Regiment two to three weeks later.

“Without that late post, we’re seeing a drop in control of barnyardgrass control anywhere from 15% to 30% control,” Webster said during a recent virtual row-rice presentation. “What I really like is if you look at that late post Newpath + Regiment, Regiment has really good activity on large barnyardgrass late. And then with the Newpath, I’m getting some activity post-emerge plus my residual with Newpath.”

The program with a late post provided upwards of 85% barnyardgrass control, he said. Yields backed it up.

Webster’s take-home message: “I want to stress the need for overlaying residuals in an upland system. Every time you go across that field, have an herbicide in your tank that gives you residual activity, and use herbicide programs that take advantage of multiple modes of action.”

Plan for an extra herbicide application 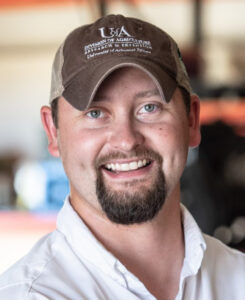 University of Arkansas Extension weed scientist Tommy Butts, along with weed science colleagues Tom Barber and Jason Norsworthy, have looked at herbicide programs for row rice that focus on barnyardgrass and Palmer amaranth.

These weeds rank No. 1 and No. 2, respectively, as the most troublesome based on Arkansas rice grower surveys.

What the University of Arkansas researchers have found is growers of row rice will need three herbicide applications — and possibly four, depending on the year and the soil — to manage weeds so they don’t affect yields.

“With flooded rice, three applications are common, so we’re saying row rice is going to take an extra one,” Butts said.

Much like their counterparts elsewhere, the Arkansas weed scientists emphasize overlapping residuals.

In trials, the researchers found intervals between residuals were critical. By increasing the time between applications to 21 days from 14, residual control began to break down and escapes occurred.

With the third application, Butts said growers can start thinking about adding a post material to the residual, such as a Grandstand + propanil tankmix for Palmer amaranth control.

If rice flatsedge starts emerging, they could add Basagran. For yellow nutsedge, they may consider adding Permit or Gambit. Loyant is also a great option for flatsedge and Palmer amaranth control. If weeds are less than 6 inches in height, 8 fluid ounces per acre should effectively control both species. Gambit or Loyant may also be good options for other weeds that are uncommon in flooded rice production, but become problematic in row rice such as sicklepod and groundcherry.

“The first two applications are fairly set in stone from a residual standpoint,” he said. “After that, the third and fourth are based on what’s emerging and what’s coming up.”