Going for the win 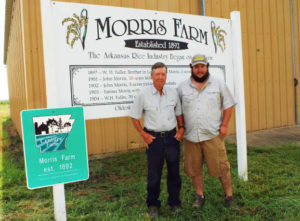 Richard Morris (left) and his son, Matt, farm
some of the same ground near Carlisle, Arkansas, that their forefathers did — photo by Vicky Boyd

Founded in 1892 by John and Emma Morris, Morris Farm near Carlisle, Arkansas, is the oldest commercial rice operation in the state.

Richard and Matt Morris, fourth- and fifth-generation descendants, respectively, have embraced water-saving technology during the past several years to steward finite resources and help ensure the farm remains productive for future generations.

“It sets everything up for future generations, and we feel so blessed because our kids love being out there,” says Matt’s wife, Erica.

“These are game changers,” Matt Morris says. “The way we look at how we irrigate is completely different now compared to even five years ago.”

In addition, the Morrises take a hard look at field fertility and were pulling grid soil samples even before GPS was available commercially. More recently, they added N-STaR and the GreenSeeker handheld to fine-tune nitrogen management.

Matt Morris put these practices to the test during the 2018 season when he entered the University of Arkansas’ inaugural “More Crop to the Drop Contest.”

The competition borrowed components from three different contests: The Arkansas Grow for the Green Soybean Yield Contest, the National Corn Growers Yield Contest and the University of California’s Rice Yield Contest, says Chris Henry, Associate Professor and Water Management Engineer at the Rice Research and Extension Center in Stuttgart, Arkansas. But More Crop to the Drop had a twist – it included water-use efficiency.

Each contestant either had to borrow a flow meter from their county Extension office or Natural Resources Conservation Service or buy one. Without the instrument, neither the entrants nor the judges would know how much water was applied.

The contest goal was to raise awareness of a dwindling resource in the state and how to maximize production for each acre-inch of water applied, Henry says. An acre-inch, or 27,154 gallons, is the amount of water needed to cover 1 acre of land 1 inch deep. 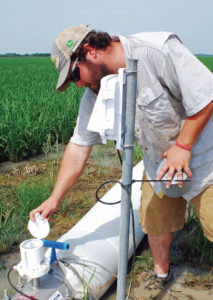 The moisture came from 16 inches of applied water and 13.4 inches of precipitation. For his efforts, Matt won a tote of hybrid rice seed from RiceTec, valued at $12,000.

The average water-use efficiency among all 10 contestants was 5.25 bushels per acre-inch.

“That’s the point of the contest. You really want to manage the water, since it’s something you can’t buy more of, it’s a much bigger challenge to manage both yield and water.”

Henry says he hopes the 10 entrants benefited from the water-management knowledge they gained during the contest and will use it on future crops.

“Even if they entered the contest and didn’t win but they did the best they could, they gained perspective of how water and yields relate and how their management compares to others,” Henry says. “Each participant received a report card showing how they did compared to the aggregated result of the group.”

To put Matt’s accomplishment in perspective, the average yield in the university’s Rice Research and Verification Program was 186 bushels per acre, and the average depth of irrigation applied was 24.6 acre-inches per acre for 2018, he says.

Irrigators reported to the Arkansas Natural Resource Commission they used an average of 37 acre-inches of water to irrigate 1 acre of rice.

“Matt and his dad achieved a high-yielding rice crop on 58 percent less water than the expected irrigation needs for rice,” Henry says. 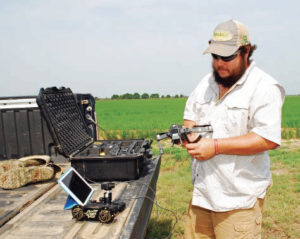 2018 marked the 118th rice crop on the Morris Farm. In the very field where John Morris planted his first rice crop, the Morrises last summer had their automated weather station and a flow meter.

Matt planted the same 60-acre field to the hybrid, XP753, on May 8 and entered it in the water-use contest.

2018 also was the second season the Morrises used MIRI and AWD on their 400 acres of rice. In 2017, the two used the technologies but didn’t see much water savings because of above-average rainfall during the growing season.

But the drought-like conditions during the summer of 2018 really showed the benefits of MIRI and AWD, Matt says.

AWD involves allowing a flood to recede to a muddy state before the field is reflooded. It works best when paired with MIRI, which uses collapsible poly tubing to simultaneously flood all paddies within a field.

A Pani pipe placed in the field lets growers view the water depth below the soil surface as the surface begins to dry. Together with soil moisture sensors, it helps users better time reflooding the field.

Located on Arkansas’ Grand Prairie, the Morris Farm sits atop the severely overdrafted Mississippi River Valley alluvial aquifer. In the 1980s, Richard wanted to reduce reliance on groundwater and built a 60-acre reservoir with a 600-acre-foot capacity. The family added an additional 20-acre water-storage structure a few years ago.

In addition to rice, the Morrises grow corn and soybeans, which are irrigated with the same surface systems. They do have deep wells as back-up, but Richard prefers not to turn them on because of the substantial cost and to preserve the aquifer.

But 2018’s dry conditions had them worried.

“We knew since we built that new reservoir we had 20 more acres of surface water, but we were a little concerned about how it was all going to play out,” Matt says. “But it was all textbook.” 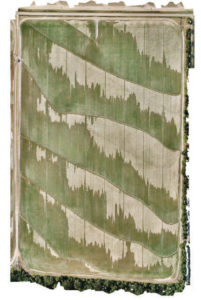 This image from Matt Morris’ drone provided a birdseye perspective of irrigation water moving across individual paddies within a field. Based on this, he adjusted the blue gates within a few paddies to promote more uniformity — image courtesy Matt Morris

Matt used the University of Arkansas’ “Rice Irrigation” mobile app to develop his MIRI plan for each rice field. As he began to flood the fields during the spring, he launched a DJI drone to check water movement across each check. Using Drone Deploy software, Matt was able to view the aerial image shortly after the drone returned to the launching site.

In one field, for example, Matt saw the water was taking longer to move across a few of the paddies so he fine-tuned the blue gate settings from the Rice Irrigation app on the collapsible tubing to provide a larger flow.

The result was more uniform irrigation across all paddies, reducing the risk of fertilizer volatilization.

To make checking fields easier, the Morrises put their GreenSeeker reference plot near the AWD monitoring pipe, so they could take care of both during one stop.

Matt also used his smartphone to monitor through the remote weather station in one of their rice fields how much water was being lost each day to evapotranspiration.

To stretch surface supplies across the fields, they added surge irrigation valves. Based on data collected from moisture sensors sunk in the soil, the valves automatically switch irrigation from one field to the next once pre-set soil moisture thresholds are met.

In the past, Matt says they would irrigate for two days, then switch.

“Before, we were just guessing,” he says. “Now we surge irrigate until we get those numbers down to zero.”

Matt admits he babied the contest rice field and had many a sleepless night wondering whether he should have done something differently.

Ironically, he says, even their non-contest rice fields averaged close to 228 bushels per acre on about 16 inches of applied water.

“Now I know we can grow more rice because I’m using less water, and this year was a drought,” Matt says. “If I can do this on a year like it was, what can I do in a year that isn’t a record dry year?”