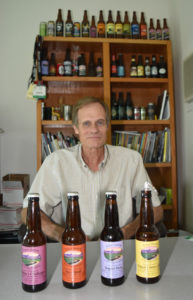 To describe Chico, California-based Eckert Malting and Brewing Co. as a labor of love is an understatement.
What started as Jim Eckert trying to home-brew beer for his wife, who had become gluten intolerant, has evolved into a commercial-scale gluten-free rice malting and brewing enterprise. Of the two, rice malting comprises the bulk of his business.

“We’re making slow progress on a lot of fronts,” he says. “A couple of my main customers are purchasing increasingly larger volumes (of malted rice), so it’s looking good.”

In addition to supplying long-standing domestic buyers and one in the United Kingdom, Eckert recently partnered with a distributor to market his malted rice to commercial and home brewers in Australia and New Zealand. He also has launched a gluten-free beer batter mix for making tempura, fried chicken and catfish, fried okra and pickles, or anything else that’s cooked in hot oil. The mix joins his existing malted rice hot cereal.

A focus on rice

But his journey has not been without hiccups. With little literature available for reference, Eckert has been a pioneer of sorts and has endured a lot of trial and error before reaching his current mix of rice-based gluten-free products.

Eckert decided to focus on rice because it is inherently gluten free and is in plentiful supply in the Sacramento Valley. Gluten, a naturally occurring plant protein found predominately in wheat, barley, rye and their relatives, can cause life-threatening health issues for people with Celiac disease. A small but growing group of consumers without gluten sensitivity also choose to avoid the protein because of perceived benefits. As a former University of California research associate stationed at the

With two bachelor degrees in crop and soil science as well as a master’s in agronomy from the University of Wyoming, he first became interested in home brewing during his college days. During the summers, Eckert worked for researchers who had wheat and malt barley variety trials.

That got him and another student thinking about making beer at home. After a few attempts, they finally figured out the nuances of brewing, and Eckert says he’s been hooked ever since.

Malted grain — which in large-scale commercial brewing typically involves barley — helps give beer its flavor and body. Malting itself involves steeping grain in warm water until it begins to sprout. During this process, enzymes begin to break down the starch within the grain and convert it to sugar.

At just the proper stage, the activity is stopped using heat, which also dries the grain.

Eckert follows a similar process, starting with paddy rice. After adding water to the grain, he aerates it until it begins to sprout and the radicle has emerged.

At this point, Eckert drains the water and transfers the grain to a kiln for drying.

Then comes the roasting, which is responsible for the color as well as distinct flavor variations among different classes of beer.

For this, Eckert turns to a rotating drum roaster originally designed for nuts.

A lighter roast, for example, may impart a golden or amber color and a nutty flavor. A darker roast will result in a brown, stout or porter with deep hues and coffee or chocolate characteristics. 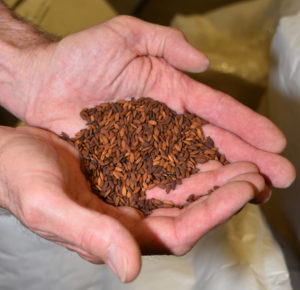 After malting, the grain is roasted to bring out different flavor characteristics.

To make beer, brewers create a mash by cooking up a starch source along with some malt. Large-scale commercial breweries typically use corn grits or rice as an adjunct ingredient. The malt provides the enzymes that start breaking down starches and converting them to sugars. The sugar is needed to feed the yeast during fermentation.

Once the conversion has begun, brewers add the mash to the main malt supply and allow the process to continue.

Eventually, they drain off the sugary liquid, known as wort. This is essentially beer before it has undergone fermentation. The spent grain has a number of uses, including livestock feed.

To start fermentation, brewers add their own preferred strain of yeast to the wort, and the micro-organisms convert the sugar to carbon dioxide — which gives beer its bubbles — and to alcohol. When the yeast has consumed all of the sugar, it dies and fermentation is complete.

Although Eckert follows traditional brewing processes for the beers he makes commercially, he says they don’t taste the same as many popular beers because he uses exclusively rice.

“I tell people my flavor profile is going to be different,” he says. “With my dark lager, people are trying to say it’s a porter, but it’s not exactly a porter. I don’t want to be shoehorned into a barley thing. I am not making an exact barley replication because it’s not possible — they’re different grains.

“People are often surprised by the initial flavor profile differences because they’re used to barley beers, and some people can’t accept it.”

“Jim has something special, and we want to be part of it,” says Gold River Distillery CEO Greg Baughman.

The distillery aged its first single malt rice whiskey in barrels and released it a few months ago. Single malt refers to a single batch — rather than multiple batches — of malted grain being used in a particular lot of whiskey.

Baughman says they decided to look at a rice-based whiskey for customers who want to avoid gluten.

Baughman says he also believes his is the only distillery currently using malted rice in whiskey.

“One of the biggest issues that a lot of distilleries have is actually figuring out how to do a mash for rice efficiently to get the higher gravities you do with other grains,” he says. “We’ve figured out the ideal temperatures and mash times since we started using Jim’s product.”

The higher gravities to which Baughman referred are an indication of higher alcohol content.

Whiskey is made by coarsely grinding dried malted grain — in this case rice — and mixing it with hot water in a mash tun. Periodic stirring of the mash aids in the conversion of starches to sugar.

At just the right time, the wort is drained off. Yeast is then added to the wort. Once fermentation is complete, the liquid is run through distillation, which concentrates the alcohol content and removes undesirable components.

The liquid then moves into oak casks, where it ages and matures before bottling.

How many small-scale or craft breweries use rice to make gluten-free beers is hard to gauge, says Chris Swersey, supply chain specialist and competition manager with the Denver, Colorado-based Great American Beer Festival.

“We don’t benchmark rice usage at craft breweries, so I don’t have good figures for you among our members,” he says in an email.

Nevertheless, Swersey says he has seen the category grow during the past few years within the competition. To be entered into the gluten-free category, the beer must be produced using all gluten-free ingredients. It cannot be gluten reduced, which involves using enzymes that break up the gluten protein.

“At least 15 beers entered in the 2016 Great American Beer Festival were made with rice,” Swersey says. “Most of these were entered as gluten-free beers, but not all. We don’t collect recipe/amount data, and the identity of these breweries would unfortunately be confidential.