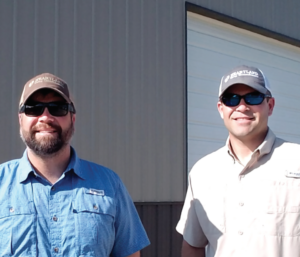 My brother, Wes, and I grew up on a cotton and soybean farm in the Bootheel of Missouri. I worked for a consultant after my dad quit farming in 1999, and Wes did custom spraying for eight years. In 2008, I started Heartland Crop Consultants, and Wes and I became partners in the business in 2011.

The 2017 rice crop was above-average overall. However, acres planted in late May due to wet conditions didn’t do as well and were affected by cooler weather in early September. As a general rule, we typically don’t like to plant rice past May 15 this far north. This year, we finished planting most of our rice acres the first week of May.

Wide Variety Of Weed Pests
We consult on a broad range of soil types. Production systems include zero-grade acres, furrow-irrigated rice and even some pivot-irrigated rice. Each of these brings its own set of challenges. Our weed spectrum is made up of barnyardgrass (some resistant), Amazon sprangletop, Pennsylvania smartweed, giant crabgrass, broadleaf signalgrass, smallflower umbrella sedge, hemp sesbania, northern jointvetch and Palmer pigweed.

Grasp SC provides good barnyardgrass control — especially on bigger barnyardgrass — and helps control aquatics. We apply RebelEX on some of our zero-grade ground after the residuals have played out. If it has rained before flood and we can’t use a ground rig, we make an aerial application of RebelEX to control sprangletop and barnyardgrass.

Where resistance is increasing — especially in areas with continuous rice — Loyant herbicide will be an important tool. We definitely want to apply it on fields with resistant barnyardgrass competition. Loyant also will be a key player on zero-grade acres where smallflower umbrella sedge is present.

Now that we have improved rice varieties and better weed control options, row rice is becoming more popular in the Missouri Bootheel. Our biggest problem in this production system is pigweed. Water runs down the middle of the rows and soaks through the beds, which creates an ideal environment for this pest. It’s important to have a thick rice stand to shade the ground and apply Loyant herbicide. It does an excellent job on pigweed.

While he was farming, our dad always told us there are a lot of variables you can’t control, but you also can’t save your way into prosperity. It’s best to focus inputs in places that provide the greatest return, so you have a better chance for success.