ow rice has made strides over the past few years as growers have learned more about this different method of growing rice. Referred to interchangeably as furrow-irrigated rice, row rice is grown similarly to other row crops like soybeans or corn, as it uses poly-pipe irrigation rather than levee utilization. Specialists in some of the states that grow the majority of rice in the United States speak to some of the applications and discoveries of furrow-irrigated rice. 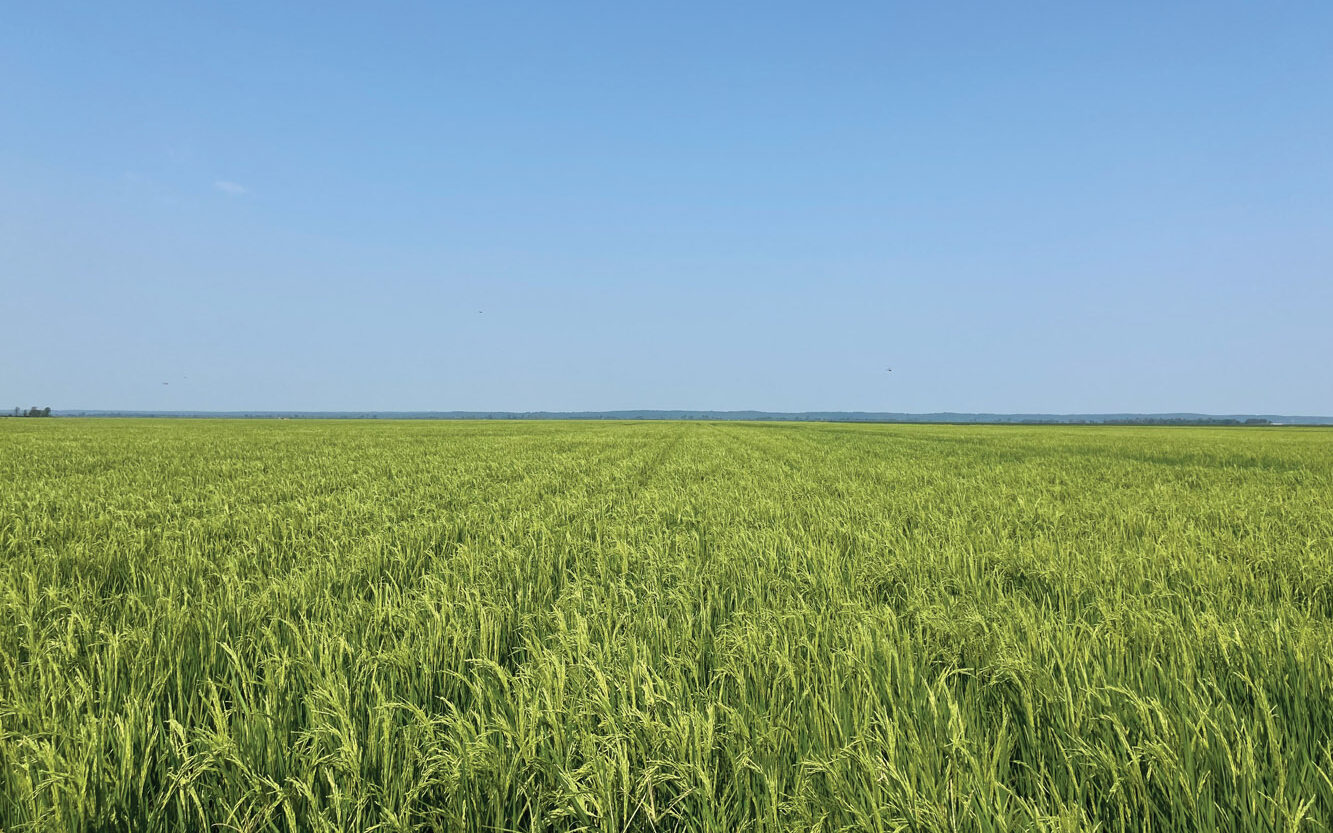 Dr. Jarrod Hardke, a professor and Extension rice agronomist at the University of Arkansas, said row rice allows for the omission of building and tearing down levees and for the ability to apply more ground applications versus air. He suggested a benefit to row rice is cost.

“Levees are costly to construct and remove, require additional seed, and require that most fertilizer and chemicals be applied aerially.”

Dr. Hunter Bowman, an assistant professor and state rice specialist at Mississippi State University, said the ability to easily incorporate rice into a traditional row crop rotation with current equipment and labor is a major plus.

“Levee or paddy rice is typically grown in fields on land formed for rice production. These fields have slight to a zero-grade, allowing for minimal levees, which can often be straight levees. When planting rice on a field, not land formed with rice production in mind, often multiple contour levees are required. Flooding rice with contour levees can be labor intensive, and row rice helps reduce that labor cost. Row rice also allows a grower to rotate from soybeans to rice with less tractor trips across a field between the two crops,” Bowman said. 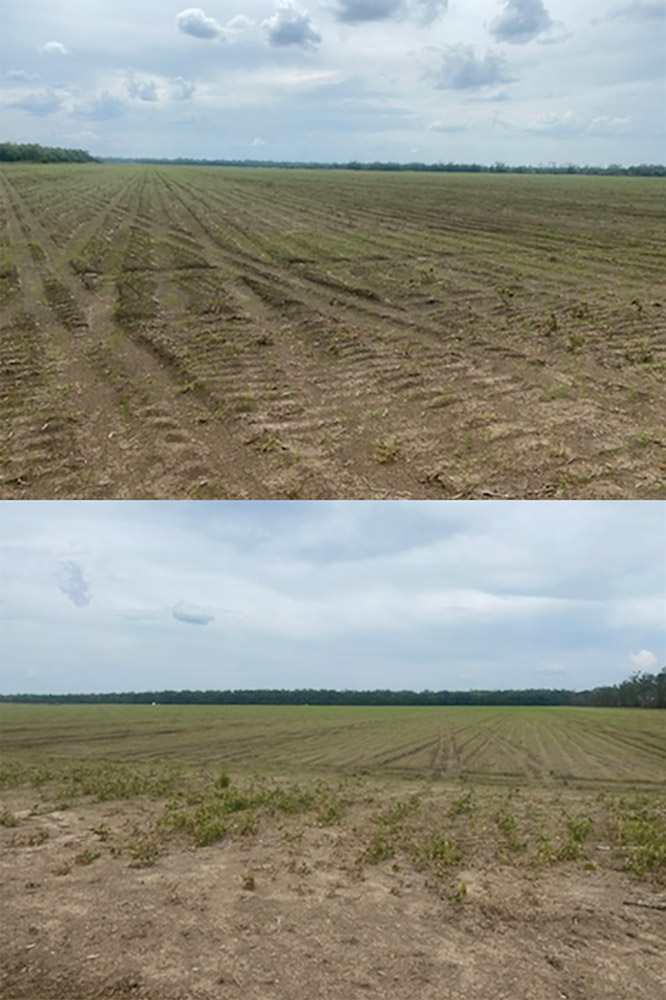 Dr. Ronnie Levy, a state rice specialist at LSU AgCenter, said row rice gives the grower an opportunity to switch crops based on the value of each crop. He said this is much more of a favorable economic venture in North Louisiana versus South Louisiana where they grow crawfish and benefit more from levee-based systems.

Greenhouse gas emission reductions that come from alternate wetting and drying is a big advantage. There were benefits available through government programs that made row rice more economically viable to growers.

Cost of fertilizer was a big disadvantage for row rice this past year. Levy pointed out that, while soybeans can fix their own nitrogen, “we have to supply all the nitrogen for rice.”

The evolution of row rice operations

Though row rice would still need to be irrigated more frequently than other row crops, Hardke said growers are starting to get more comfortable with the idea of rice tolerating a flood but not requiring it. He suggested most first-time, row rice farmers tend to overwater the crop, but the 2022 drought saw the reverse with healthy-looking rice not receiving enough water.

“Soil type and slope both considerably change our options for row rice. On precision-leveled fields, we don’t have to construct beds, but instead, making water furrows is sufficient. However, on contour fields where side-slope is present, we still need to construct beds to keep water in the furrows.  The best nitrogen strategies continue to be those that divide nitrogen up into multiple different applications (as opposed to largely relying on one big application in flooded rice),” Hardke concluded.

Bowman pointed out that row rice is not a new concept as it had been attempted in the ‘80s and ‘90s.

“The difference in then and now is that we have cultivars with better disease packages, we are more efficient with fertilizer, and we have done extensive work with irrigation timings in row rice,” he said.

“It costs probably two to three times as much to plant an acre of rice versus an acre of soybeans,” so throwing in the added input costs doesn’t tend to help.

Row rice as a viable option for the future

“Rotation between rice and other crops is simplified, and the economics improve due to reduced tillage passes.  We can re-use old beds among rotational crops if the opportunity presents to see even greater efficiency,” he said.

While South Louisiana has different water-holding properties in soil, North Louisiana already has the rows that make row rice a viable option for growers.

Levy said row rice also enables the northern part of the state to introduce different herbicide programs to assist in their rotation. This can, in turn, solve problems in their other crops as well.

In Arkansas, Hardke sees row rice encompassing no more than 30% of the state’s acres anytime soon given current cultivars and practices. But he thinks the variables shown to growers over the past few years can still prove there are areas where row rice makes “a great deal of sense.”

“Row rice water use can be similar to, or even less than, flood rice systems. However, the timing of demand can be a notable issue. This is one of the standout factors making shifting to this practice more difficult. In areas where pumping stations are devoted to only a field or two, it is easy to move water back and forth. However, where pumping stations are tied into systems and not as easily swapped, things get complicated, and timings get missed.”

Hardke, after discussing the potential for yield penalties with incorrect irrigation timing, suggested row rice could still be viable where it is better-suited and the timing works out.

“I think we’ll continue to gradually increase as we learn more and improve, but for many acres flooded rice is still the more consistent practice,” he said.

Bowman sees a similar future for row rice in Mississippi.

“If we see an increase in row rice acres, it will be those growers who’ve traditionally grown other row crops and want to get into the rice market. I always say we have a strong group of rice growers in Mississippi who are good at what they do, and I don’t foresee them changing their operations. Acres will increase as we continue researching and gaining knowledge of row rice,” he concluded.

There may be a slight increase of row rice acres in North Louisiana, according to Levy, due to economic incentive programs. This may also come with a potential shift into South Louisiana if those incentives remain.

He said economic and environmental returns are what play most heavily into the decision-making process for furrow-irrigated rice.