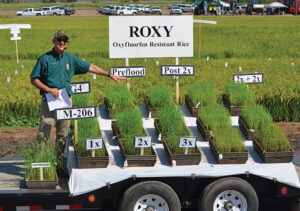 Kent McKenzie, who was Rice Experiment Station director before recently retiring, led a team that discovered the ROXY trait that provides resistance to oxyfluorfen herbicide.

Researchers at the grower-owned Rice Experiment Station identified a gene in 2014 that imparts tolerance to oxyfluorfen herbicide and are developing varieties containing the trait. Ankeny, Iowa-based Albaugh, which markets post-patent crop protection materials, is partnering with the foundation to develop proprietary oxyfluorfen formulations — ALB2023 and ALB2024. The company also is working to obtain federal and state registrations for use of the products on rice with the ROXY trait.

If all goes as scheduled, the ROXY Rice Production System could be commercially available to California growers as early as the 2023 planting season, said experiment station CEO Russell Rasmussen.

“This is a new trait, so this will be a new experience for California bringing a new trait to the market,” he said. “It will be different than the way we bring a variety to the market. It will require more quality control measures, and there will be a royalty that we hope to keep low because it’s funded primarily by the growers, but we still have to recover some of that investment.”

In field trials with water-seeded rice, the system has provided good to very good control of a broad array of grasses and broadleaf weeds. It also has performed well in drill-seeded trials.

As such, Rasmussen said the California Cooperative Rice Research Foundation, which owns the trait, may eventually license it to breeders in Arkansas, Louisiana, Mississippi, Missouri or Texas.

Stewardship will be critical

Shelton emphasized that this is a rice production system that pairs rice varieties that contain the ROXY trait with proprietary oxyfluorfen formulations being developed by Albaugh. 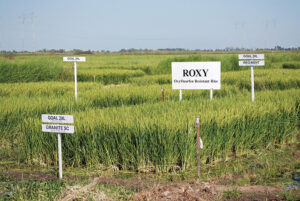 A Weed Science Society of America Group 14 PPO inhibitor, the herbicide controls a wide variety of grasses and broadleaf weeds. Currently, no California rice weeds are known to have resistance to PPOs.

Shelton stressed that stewardship will be key to keeping the ROXY production system viable and slowing weed resistance like what has occurred with other herbicide-tolerant rice systems.

“This is your first herbicide-tolerant trait,” he told growers attending the recent Colusa County Farm Supply annual meeting in Maxwell. “How long until you get your next one? So rice industry and grower stewardship will be critical.”

He envisions growers using the ROXY system until they’ve reduced their weed seed bank, then switching to other herbicide technologies with different modes of action. The company is only targeting 25% to 30% of California rice acreage.

ALB2023 and ALB2024 also are not stand-alone herbicides and will be promoted as part of an integrated weed management strategy that includes different effective herbicide modes of action.

ROXY rice, which stands for “resistant to oxyfluorfen,” was developed by a team led by recently retired experiment station director Kent McKenzie using traditional induced mutagenesis. The technique was also used to develop California’s first semi-dwarf, Calrose 76, as well as M-401 and Clearfield and Provisia varieties, among others. They are not considered genetically modified organisms or GMOs.

The ROXY trait is the result of a single-gene mutation recovered in M-206 — the most widely grown Calrose medium grain in California — that allows it to tolerate oxyfluorfen herbicide, said McKenzie, who continues to consult for Albaugh. The line is tolerant but not resistant to the herbicide, so high rates could cause a crop response.

Rasmussen said breeders also plan to develop a ROXY line based on the recently released M-211, a high-yielding premium Calrose.

Trials put ROXY to the test

The ROXY system was first put to the test in a small Glenn County field trial in 2015. It has been trialed in subsequent seasons by the University of California at the Rice Experiment Station and by Butte County Rice Growers Association, Colusa County Farm Supply, Wilbur-Ellis and GrowWest.

This season, researchers plan to expand trials both in size and geographic distribution to take into account variations in soil type, microclimates and production environments. They also hope to zero in on optimum oxyfluorfen rates as well as fine-tune water management.

In a water-seeded program, growers would apply ALB2023 on dry soil after injecting fertilizer and rolling/grooving the surface. Then they’d flood up and have their seed flown on.

So far, the system has provided good to very good control of both early and late watergrass, redstem, duck salad and sprangletop in trials, McKenzie said. 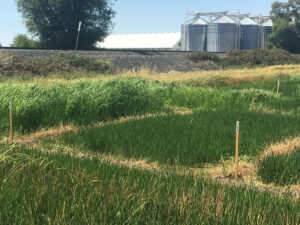 Although there was a slight delay in the heading and maturity of 17Y300 and 19Y400, he said yields of the two have been comparable to their non-ROXY counterparts, M-206 and M-210.

In addition, researchers looked at ALB2024 postemergence to control weedy rice in 2020. Because no one wanted to bring weedy rice seed onto the experiment station, they used the short-grain koshihikari as a surrogate.

McKenzie plans to repeat it this year and add a water-seeding trial as well.

To gain registration on rice, Shelton said, Albaugh has conducted needed residue and tolerances. The California Department of Pesticide Regulation has its own set of data requirements, which Albaugh also will have to meet.

He said the company successfully requested concurrent state and federal registration reviews and planned to submit the registration packet for ALB 2023 to the two agencies by the end of March.

This is not the first time that Albaugh has partnered with a grower-owned group to bring a novel trait to market. The company’s first effort involved the CoAXium Wheat Production System and Aggressor herbicide, a collaboration among the Colorado Wheat Research Foundation, Albaugh and Limagrain Cereal Seeds.