Take an integrated approach to disease management and consider several factors before making an application. 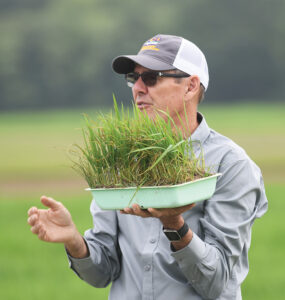 No two farming seasons are alike, and that also goes for variations in plant disease severity from year to year.

Nevertheless, plant pathologists say some recommendations ring true every season. Start by choosing varieties with tolerance to your most troublesome diseases, manage the crop correctly, scout fields regularly, accurately identify diseases, use the proper fungicide applied at the right timing and rotate effective modes of action.

“Fungicides should not be applied automatically,” said Yeshi Wamishe, University of Arkansas Extension rice plant pathologist. “You must have a reason to justify a fungicide, such as the field has an extensive history of disease, you have especially conducive conditions, you’re growing a disease-susceptible variety, the rice was planted late or if you’re planning for ratooning.”

Of the 25 known rice diseases in Arkansas, only a handful are considered economically important: sheath blight, blast, kernel smut, false smut and narrow brown leaf spot. Louisiana growers face a similar disease spectrum, although those who farm in the southern part of the state and who ratoon have to protect their first crop from disease to maintain second-crop yields.

During a recent virtual review of the 2020 season, Louisiana State University AgCenter plant pathologist Don Groth said, “We’ve learned some lessons, and there have been some changes we’ve had to adapt to.”

Bayer, for example, discontinued marketing Stratego fungicide, a premix of propiconazole and trifloxystrobin, for rice.

“That’s going to be a big shift because it’s one of our major blast materials,” Groth said. 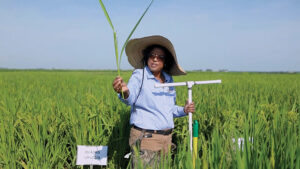 Gem, a trifloxystrobin from Bayer, will be discontinued and instead marketed under the existing brand, Flint, in 2021. By tankmixing Flint with 6-10 ounces of propiconazole, growers essentially can make their own Stratego, he said.

Entering the 2020 season in Louisiana, the cold winter reduced much of the overwintering rice, which prevented blast and Cercospora — the genus of fungi responsible for narrow brown leaf spot — from getting an early start. That helped reduce problems in the first crop, Groth said.

“The big thing we noticed last year is with a lot of our new medium-grain varieties, we saw a lot more blast,” he said.
Jupiter is susceptible to blast, and he saw serious leaf blast in CLM04, the new Clearfield medium grain, and Titan.

One of the main strategies against blast is to choose a blast-resistant variety, and many of the more recent releases have one and often two blast-resistant genes. Outside of that, Groth recommended planting early, maintaining a flood since water helps suppress disease progression, making modest nitrogen applications and using a strobilurin fungicide.

Depending on disease severity and what part of the plant is infected, growers can lose up to 100% of their yield if a susceptible variety is not protected with a fungicide, Wamishe said.

Optimum application timing is between 50% to 60% head emergence, Groth said. If you wait until the heads are completely out, you’re too late and could lose 300 to 500 pounds of yield potential.

“Apply the fungicide, especially for blast, just when the heads are beginning to emerge,” he said.

Sheath blight is one of the most economically important rice diseases worldwide. Caused by the soiborne fungus Rhizoctonia solani, it also is responsible for root rot and damping off in soybeans. 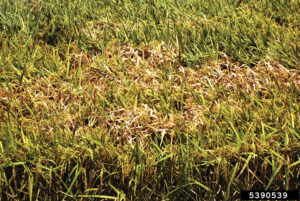 For areas with strobilurin resistance, Groth recommended the carboxamides, such as Elegia (flutolanil) or Sercadis (fluxapyroxad), and Artisan, a premix of flutolanil and propiconazole.

If you see sheath blight very early in the season or see severe symptoms early, he recommended applying a fungicide at PD + 7.

“The problem with putting out a fungicide that early is we might have to come back with a second application,” Groth said. If the variety has moderate resistance or weather forecasts show conditions won’t be conducive in the coming days, then growers may wait until between boot and heading.

2019 proved an epidemic year for both kernel smut and false smut. During harvest, black clouds from kernel smut spores could be seen around combines. 2020 wasn’t nearly as bad, although some smut was seen later in the season. 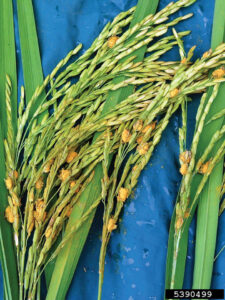 “They got the correct fungicide out at the right time to knock the epidemic down,” Groth said. Fungicides that contain a triazole are the most effective.

The application window for kernel smut is narrow, from boot to 2- to 4-inch panicle.

“The timing is critical,” he said. “If you wait until heading, you almost have no activity against this disease.”

Wamishe said kernel smut is more sensitive to fungicides than false smut. Both of the smuts can be aggravated by excessive nitrogen applications. In fact, false smut is sometimes referred to as a “high yield disease.”

“Because of that, we’re having more and more false smut every year in all of our varieties — conventional as well as hybrids,” she said.

Cercospora on the rise

Narrow brown leaf spot, which causes premature kernel ripening and lodging, has become more problematic in recent years. It is considered a late-season disease and is seen more on potassium-deficient soils. Yield losses can reach up to 40% in severe cases.

Although resistance among rice varieties has been observed, it is an unreliable control method because races evolve quickly. And the later a field is planted, the earlier the disease symptoms may be present.

“The later you plant, the more disease you will have and the earlier you need to put out the fungicide,” Groth said.

Triazole fungicides applied between boot and heading offer control. When he first began studying the disease in the mid-2000s, Groth said 4 to 6 ounces would control Cercospora. Now because of increased tolerance, it takes 8 to 10 ounces.

Wamishe said if she receives funding, she plans to conduct trials this season to fine-tune fungicide timings for Cercospora for her state’s growers.