Success is in the air 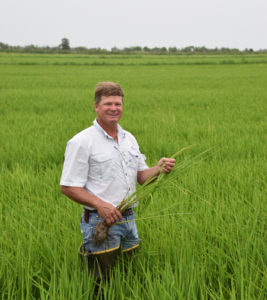 Paul Johnson, who farms near Welsh, Louisiana, is a strong proponent of U.S.-grown jasmine-type rice — photo by Vicky Boyd

Fred Zaunbrecher of Duson, Louisiana, has grown jasmine-type aromatic long-grain varieties for years, having harvested the newest, Clearfield CLJ01, the past two seasons. Although the U.S. rice industry will likely never be able to fully sway Asian-born consumers who favor Thai jasmine, Zaunbrecher says he is encouraged by U.S. consumers’ positive reactions once they try domestically grown jasmine-types.

“I think the biggest thing is they’re not aware of it,” he says. “For one thing, a lot of people think rice isn’t even grown in the U.S. They’ve heard about Indian basmati and Thai jasmine, and they think they’re the only places it can come from.

“I think we need to make consumers more aware and also relate it to food safety and the pride of a good quality, home-grown product instead of something that’s imported.”

The goal is to have more U.S.-grown jasmine rice added to menus by getting buyers to switch from imported to domestic rice.
Jasmine is the fastest growing rice variety in the United States, appearing on 26% more restaurant menus and 108% more fast-food menus over the past four years, according to USA Rice figures.

“Promoting U.S.-grown aromatics is a priority for domestic promotion and what better way to showcase the variety than actually providing a sample of it to the people in the foodservice sector responsible for menuing, purchasing, and promoting,” Cameron Jacobs, USA Rice manager of domestic promotion, said in a recent news release.

The United States annually imports the equivalent of 440,000 acres of rice, with most of that being basmati and Thai jasmine. 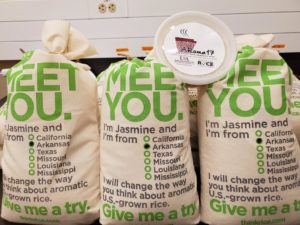 Even if U.S. producers could supplant just 10% or 20% of that with U.S.-grown jasmine, he says it would be the equivalent of 44,000 or 88,000 acres, respectively, and a huge boost for the domestic industry. Walker praised USA Rice for its recent jasmine-focused promotion, calling it a start.

“I think it’s great that the federation is starting to say, ‘Hey, this is something we need to do from a domestic standpoint,’” he says.

But the question remains — how does the U.S. industry expand those efforts?

“You will always have your Jimmy Hoppes and others that do a decent job for their individual operations,” Walker says, referring to Iowa, Louisiana, jasmine pioneering producer Hoppe. But these growers are smallish and don’t have the financial wherewithal to obtain shelf space for the likes of national grocery chains, such as Kroger.

In addition to telling consumers about the tantalizing aroma and flavor, Zaunbrecher says they need to learn about the U.S. rice industry’s commitment to sustainability and food safety.

“When they understand about the differences between imported rice and this, to me that would make a big difference,” Zaunbrecher says.

As the former chairman of USA Rice’s Domestic Promotion Committee, he says he understands money is needed to promote a product and the rice industry only has a certain sized budget.

“I don’t know what it’s going to take,” Zaunbrecher says. “You have to get the consumer aware of it, then they have to accept it and buy it. Then you have a market developed.

“We still see that during September, which is National Rice Month, and we’re talking about cooking rice, a lot of people don’t know anything about rice. It just takes a lot of money to get the message across and it’s so expensive, so you have to do a little bit at a time.”

A challenging year in the fields

During 2018, Zaunbrecher’s CLJ01 had stellar first-crop yields of 45 barrels per acre (7,290 pounds or 162 bushels), and milling quality was 67/71. He didn’t grow a second crop, instead putting the field into crawfish.

Paul Johnson, who farms near Welsh, Louisiana, had similar results with his CLJ01 in 2018, harvesting 57 barrels per acre (9,234 pounds or 205 bushels) between first and second crop.

This year, Zaunbrecher only harvested 39 barrels per acre (6,318 pounds or 140 bushels) with his first crop of CLJ01 because of a number of weather-related issues.

“We weren’t expecting it to meet its potential — we had too many things going against it,” Zaunbrecher says of this year’s crop. As of press time, he hadn’t submitted samples to the mills yet for testing. 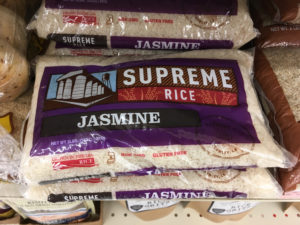 Johnson says his 2019 yields across the board were down about 30% from average, regardless of variety.

“This is the worst crop I’ve ever had,” he said of his 23 years in farming.

High nighttime temperatures during bloom and grain fill reduced the number of kernels in each head, Zaunbrecher says. In addition. Hurricane Barry caused physical damage to the florets during pollination.

Most growers throughout Southwest Louisiana reported sizable yield decreases, regardless of the variety or hybrid, according to LSU AgCenter reports.

Despite those setbacks, Zaunbrecher — who began growing aromatic varieties with Della several years ago — and Johnson say they remain committed to U.S. jasmine.

“We’re going to continue to plant it,” Zaunbrecher says. “We did really well with it last year and contracted it at a decent price. We haven’t changed our minds.”

Johnson agrees. “Jasmine is a great fit for us. I like to try to forward contract or at least forward price as much of my crop as I can. And the premium I’ve been getting on the jasmine has been good.”

With a popcorn-like bouquet, ARoma17 smells like a winner 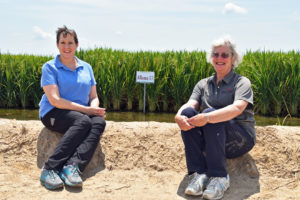 ARoma17, the University of Arkansas’s new jasmine-type long-grain variety, has been in the works since 2009 when a cross was made between Jazzman and a plant introduction line donated to the U.S. Department of Agriculture Agricultural Research Service’s National Small Grains Collection.

From there, breeder Debra Ahrent Wisdom crossed and backcrossed the various generations to improve the agronomics while maintaining the distinct aroma and flavor. It was named and became publicly available in 2017.

In addition to a number of agronomic characteristics, Wisdom and Karen Moldenhauer, a professor and rice breeder at the Rice Research and Extension Center in Stuttgart, screened the top candidates for flavor.

“We look at plant type in the field and yield,” Wisdom says. “Then we take the top 10 and cook those and see if we have a winner.”

They also analyzed the variety for gel temperature, which influences cooking time, and amylose content, a measurement of stickiness. Varieties with high amounts of the amylose starch cook up drier than those with lower amylose content.

As part of their assessments, the breeders measured the amount of 2-Acetyl-1-pyrroline, or 2AP — a natural compound that gives jasmine rice its customary popcorn-like aroma.

Han-Seok Seo, an associate professor and director of the University of Arkansas Sensory Service Center, recently completed a consumer preference taste test that compared Jazzman-2, ARoma17 and a number of imported Thai jasmines. He submitted an article that detailed the results to a peer-reviewed journal in November.

‘Nothing but positive feedback’

To help inform the public and growers alike, the University of Arkansas gave away hundreds of plastic sample tubs of ARoma17 and Diamond at its August Rice Field Day in Stuttgart. They followed up by distributing an additional 500-plus samples of the two varieties at the October Downtown On The Farm celebration in Little Rock.

And the response has been enthusiastic, says Bob Scott, director of the university’s Rice Research and Extension Center in Stuttgart.

“So far, we’ve received nothing but positive feedback on ARoma17 as far as the flavor and cooking quality,” he says. “We haven’t run into anybody who doesn’t like it. My biggest problem is they want another tub or they want to know where they can buy it.”

The variety has never been officially released, Scott says. Instead, the Foundation Seed Program continues to grow the seed to maintain quality and sell it to growers.

In the meantime, the university is looking for a partner to take over seed production and marketing activities.

“I think once demand gets high enough, we’ll see a seed producer step up and fill that niche,” he says. “For now, we’re making sure growers have a clean foundation seed supply. We have enough to fill that demand at the moment.”

If you’re interested in a sample tub of ARoma17 or Diamond, stop by the University of Arkansas booth during the Rice Outlook Conference Trade Show, Dec. 8-10, in Little Rock.

Three U.S. breeding programs have developed jasmine-type rice varieties. The Louisiana State University AgCenter has had a long history of breeding aromatic jasmine-type varieties, with the latest being CLJ01 released in 2018. 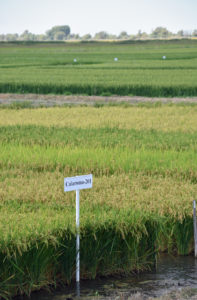 Calaroma-201, a long-grain jasmine-type released in 2018, was developed by the California Rice Experiment Station.

ARoma17, a long-grain jasmine-type from the University of Arkansas’s rice breeding program, was available in limited quantities in 2018 and 2019. It is a cross between Jazzman and a Chinese line from the world rice collection.

“This is our California version of jasmine having the aroma, the soft cooking and low amylose,” Kent McKenzie, director of the Rice Experiment Station, says of Calaroma-201.

California produces predominately medium-grain varieties, and interest in the new jasmine has been limited.

“There have been a few entrepreneurs who are trying to market it on a small level, and they’ve been excited about it,” he says.

So far, the variety has received rave reviews,

“The feedback we’re getting from the people who are trying to develop the market has been very positive in terms of quality,” McKenzie says.

Unlike some specialty rice varieties, which tend to yield less than more mainstream types, he says Calaroma is a high yielder. In fact, at more than 100 hundredweight per acre, it produced the highest yields of any variety in his seed fields this year