Up, up and away

Scott Matthews, who farms in Northeast Arkansas, likes to describe his continued quest for improving water-use efficiency and yields as “conservation irrigation.”

“Where you’re standing right here is a critical groundwater area, and when I say that, I capitalize ‘critical groundwater area,’” said Matthews, who is farming ground near Weiner that’s been in the family for 115 years. “We don’t just conserve irrigation because we want to – we conserve irrigation because we need to and it’s very, very, very important.”

He has already precision graded all but one of his rice fields for better water-use uniformity. Matthews also uses multiple-inlet rice irrigation, coupled with the University of Arkansas’ hole-selection app, throughout his farm. MIRI — which uses collapsible poly tubing to deliver water simultaneously to each paddy — saves an average of 20% to 25% water compared to regular flood.

It also improves the efficiency of fertilizer and herbicide, resulting in more uniform crop growth and maturity. In addition, it reduces the cold water effect in the first levee.

With most of the low-hanging fruit already picked, Matthews has stepped up his conservation efforts by enlisting unmanned aerial vehicle, or drone, technology to move to the next level.

Mike Hamilton, University of Arkansas irrigation instructor, is a drone convert and now uses them to help growers determine growers determine exact field and paddy sizes as part of helping them set up MIRI in a field. With as little as 20 minutes flight time, he can gather the needed data.

As the drone flies, a mounted camera takes a series of images that have to be stitched together afterward to create an entire field map. And it’s this post-flight processing that takes significantly more time than the actual flight.

Fortunately, Hamilton said, he can set up a computer to process the images without human supervision.

The results are a map that accurately notates the overall field area as well as the area of each paddy and levee. Hamilton then plugs the area measurements as well as pump flow, run length and field slope into the University of Arkansas’ Rice Irrigation App or Delta Plastics’ Pipe Planner software program.

The software determines the poly tubing diameter and amount needed as well as the amount of water and adjustable gates needed for each paddy to flood simultaneously.

“So I can set that up on the front end to be closer and more accurate,” Hamilton said. “You still have to adjust the blue gates, but it’s much less adjustment if you have it set up right the first time. And once you get everything set up properly your don’t have to adjust anything the rest of the season.”

Those same precise GPS acreage figures can also be used to calculate the amount of seed needed at planting and yields at harvest.

Matthews, who worked with Hamilton to install MIRI across his farm, has turned to Richard Pickett of P&P Consulting in Forrest City, Arkansas, to more precisely measure his fields.

Pickett flies two types of drones. A rotary drone covers an area at a slower speed but is less expensive to purchase and quicker to set up.

A fixed-wing drone, on the other hand, is costlier to purchase and takes longer to set up but can cover three times the area of a rotary unit.

Pickett also has the option of two types of GPS. Regular GPS, which has 2- to 10-meter accuracy, is used for tasks such as measuring field size.

Recently Pickett has started offering drone GPS surveys that can be used to produce elevation maps showing differences within a field. For this, he uses a drone equipped with GPS coupled with real-time kinematic, or RTK, correction. The results are accurate to less than an inch.

Last fall, Matthews had Pickett fly a few of his fields for elevation and to survey for levee and ditch placement this spring.

Using specialized software, Pickett created maps and prescriptions that can then be loaded into a tractor pulling a ditcher or levee-building equipment to precisely guide them across the field. Those same GPS coordinates will remain applicable until Matthews relevels his fields.

As a result, Matthews said he is already one step ahead and won’t have to wait for dry conditions this spring to have someone mark the levees and ditches.

Because of the sensitivity of the cameras, fields to be flown for elevation must either be smoothed and ready for planting or at least have the stubble mowed closely to the ground, Pickett said.

Large dirt clods, ruts or tall plant material will interfere with the cameras and distort the results.

Fortunately, Matthews said, he was able to get some fields prepared after the 2020 harvest, unlike the previous few falls, which were marked by abnormally wet conditions and rutted fields.

“You have to have smooth ground,” he said. “The last three to four years, we had trouble with wet harvests, and we had trouble getting rid of the stubble. All of those things can work against you.” 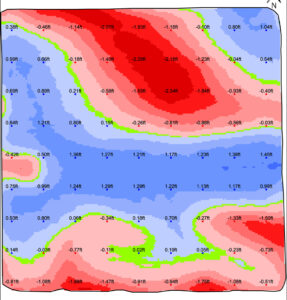 In one of his rice fields, Matthews also had a spot that produced lower yields according to his yield maps.

By overlaying Pickett’s elevation map with the yield map, Matthews found the spot was only a fraction of a tenth higher than the rest of the field.

But that inch or so meant the spot dried out quicker, stressing the rice and reducing yields. 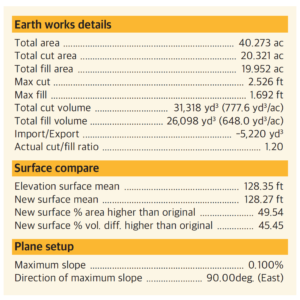 Elevation also is one of the variables entered into computerized hole-selection software for furrow irrigation.

If the grower plants to run the tubing down one side of the field, Pickett said he only needs to fly that area to measure the elevation.

But if the grower plans to run the piping down the middle, he’ll fly the entire field to determine the center of the ridge where it should be placed.

Pickett, who has used drones with GPS RTK to survey fields and develop cut maps for land leveling, said he believed that’s a market with strong potential.

Matthews agreed, saying he was impressed by the cut maps’ precision and usefulness.

“And it’s so much more accurate,” he said. “A truck drives your field on a cut sheet and a lot are driving 100-foot swaths, some are driving 50 feet. That drone can actually fly foot swaths.”

Elevation data and resulting cut maps also can be used to determine whether it is more cost effective to level a field intended for crops other than rice or install a center-pivot irrigation system, Pickett said.

But for Matthews, the technology is all about helping him move closer to his goals.

“That’s how close we are. For me, it’s achieving better irrigation efficiency in a critical groundwater area. I know it’s a lot of work and a lot of technology. But any time we can improve by just a percent or two, it’s going to make a difference in our costs and our yields.”