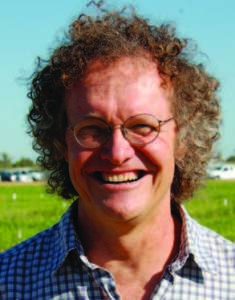 Varietal selection is one of the first and most important decisions a rice grower will need to make each year.

Second, think about your climate: both M-105 and M-206 are considered broadly adapted varieties that will do well in most California rice-growing areas. However, in the coolest areas of the region, M-105 outyields M-206.

M-210 is a new variety with broad resistance to blast. It was developed from a DNA marker-assisted backcrossing program and is essentially M-206 with additional blast resistance.

It is designed for those areas in California that have had issues with rice blast, replacing M-208. In our statewide variety trials, M-206 and M-210 have similar heading dates and yield.

Another new variety that will be available this year is M-211, which has a similar heading time as M-209. This variety has a higher yield potential than all of the other varieties.

In the northern part of the valley where it is warmer, over the four sites in the variety trial and across five years, M-211 has yielded higher than all of the other varieties by an average of 4 hundredweights per acre. In our yield contest this year, the highest yield (128 cwt per acre) came from an M-211 field in Butte county.

It seems to have a slightly broader adaptability range than M-209 and can be grown in slightly cooler areas of the valley than M-209; however, it does not do well in the coolest portions of the valley. Furthermore, M-211 has exceptionally high quality and is comparable to M-401 in some aspects.

In terms of kernel smut, preliminary results suggest it is similar to M-206 and better than M-209. The primary concern with M-211 is milling quality. This variety needs to be harvested between 20% and 22% grain moisture. When it dries below that, milling quality drops fast.

Due to weedy rice concerns, effective in 2019, the California Rice Certification Act requires that all rice produced in the state come from seed enrolled in an approved certified seed program or a quality assurance program. These steps were taken to ensure that fields are planted with seed that has been screened for the presence of weedy rice types. Handlers will be requiring proof that rice delivered to their mills has been grown with seed that met these requirements.

Big changes to Louisiana rice cultivars on tap for 2021

Both varieties have good to excellent grain quality, milling and yield potential. Both are early maturing and have a good ratoon potential. Cheniere is moderately susceptible to blast while Mermentau is susceptible.

There will be a new conventional long-grain inbred variety from the Nutrien breeding program in 2021. The DynaGro variety will be called DG263L. It has shown a tremendous yield potential in early testing. It was the top yielding non-hybrid variety when averaged across all locations in Dr. Adam Famoso’s variety trials in 2020.
I

n fact, the mean yield of DG263L was less than a bushel lower than that of the hybrid CLXL745. The variety does not contain the Pita gene, but it has shown good blast resistance in limited testing. It is moderately resistant to bacterial panicle blight and susceptible to sheath blight. Milling was lower for DG263L than Cheniere and Mermentau in limited LSU testing.

Available Clearfield long grains for 2021 will once again include the high-quality CL111 and high-yielding CL151 varieties that we are all familiar with. CL153 was grown on 19.5% of the total acres in Louisiana in 2020; however, it will not be available on a widespread basis in 2021. 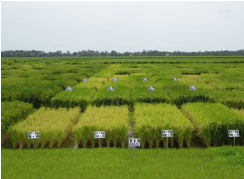 Replacing CL153 will be CLL17, which was developed by the LSU rice breeding program. CLL17 is a couple days earlier in maturity and a couple inches taller than CL153. It has shown a good yield potential and also contains the Pita gene for good blast resistance. The variety is moderately susceptible to lodging.

The nitrogen fertilizer recommendation for CLL17 is between 90 and 130 pounds of N per acre, similar to the N fertilizer programs recommended for CL151 and Jupiter. CLL15 and CLL16 are two other Clearfield long-grain varieties developed by the Arkansas rice breeding program that have also shown good yield potential.

The Provisia long-grain variety PVL02 will once again be available in 2021. PVL02 has shown an improved yield potential and disease package over the initial Provisia variety release PVL01. PVL02 matures 11 days earlier than PVL01.

Ratoon yields from the 2020 cropping season indicated the variety has a very good yield potential, something that PVL01 lacked. PVL02 is moderately susceptible to blast and sheath blight.

PVL03, a new Provisia long-grain variety developed by the LSU rice breeding program, will be available on a very limited basis in 2021. The new Provisia variety will have greatly improved blast resistance due to the inclusion of the Pita gene. It will also have improved yield potential.

Grain length will be longer than that of PVL02 but shorter than PVL01. The variety has shown good milling and grain quality in testing. PVL01 will not be available in 2021.

RiceTec will offer non-herbicide tolerant hybrids XP753, RT 7301, RT 7401 and RT 7501 for the 2021 season in Louisiana. If you are looking for IMI resistance, the FullPage line-up will include RT7321 FP and RT7521 FP. These hybrids have a yield potential advantage over the non-hybrid lines and have very good resistance to blast. The blast resistance makes rice hybrids well suited for furrow-irrigated rice, which is increasing in acreage in Louisiana at a rapid pace.

Medium-grain rice varieties will once again include the non-herbicide-tolerant varieties Jupiter and Titan, which made up the bulk of the medium-grain acres in Louisiana in 2020. CLM04 will be the only Clearfield medium-grain variety in 2021. All three varieties have good yield potential.

The adage, ‘early in, early out,’ holds true for Texas

Clearly, varietal selection is key to producing a high-yielding, high-quality crop. It has been pretty dry this fall in the Texas Rice Belt, so a lot of fields have been prepped for early planting, which in Texas is associated with fewer production problems. I know some fields will be planted in early March, depending on rainfall and temperatures.

The old maxim, “early in, early out,” holds true for Texas. The longer the crop is in the field, the more likely the chance of encountering foul weather such as we experienced in 2020. Hurricane Hanna came ashore July 25 in South Texas and brought a lot of untimely rain to the western Texas Rice Belt.

Flowering main-crop rice was negatively affected. In some cases, harvest had to be delayed because of soggy paddies. Some farmers also were forced to harvest in the mud, which rutted up fields adversely affecting the ratoon crop.

Then Hurricane Laura came ashore near Cameron, Louisiana, Aug. 27. My heart goes out to all my Louisiana friends and colleagues.

However, Texas rice farmers were somewhat spared from this Category 4 hurricane. We were on the “dry side” and far enough west to avoid the high winds. 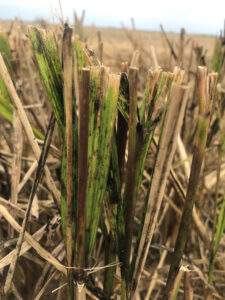 I always suggest not “putting all your eggs in one basket,” especially if you plan to plant a cultivar you have not grown before. You may want to contact Dr. Qiming Shao (“Doc”) with Nutrien Ag Solutions in El Campo, Texas.

On another topic, crop consultant Cliff Mock and my graduate student, Jaclyn Martin, recently collected the exotic rice planthopper, Tagosodes orizicolus, from the stubble of a ratoon rice field near Rosharon, Texas.

Jaclyn transported the insects back to College Station where she is trying to establish a colony in a greenhouse. Once the colony is established, we will screen selected cultivars for resistance/susceptibility to this planthopper.

Rice growers in Arkansas continue to see an increase in viable options for cultivar selection, with offerings continuing to evolve rapidly in a positive way.

This year will be the first in some time that conventional variety options will extend past recommending Diamond. For 2021, we will have Jewel, ProGold1, ProGold2 and DG263L.

Progeny has released ProGold1 and ProGold2, which are similar to Diamond and Jewel, respectively, in yield potential and disease packages. DG263L is a new variety from Nutrien with yield potential competitive with hybrids, meaning it can be much greater than other varieties at times.

CLL17 is competitive with the other lines. But in Arkansas, the lodging susceptibility may reduce its role unless planted very early. However, improved data on management may help in the future. The lone Provisia variety available, PVL02, has good yield potential and performs best when planted early. It fits best where weed resistance issues are the major concern and the herbicide program is needed.

For RiceTec hybrids, XP753 still has the greatest demand and proven consistency of performance. However, the introduction of RT7301, RT7401, RT7501 and RT7801 gives us more options going forward. Each of these hybrids appears to be very competitive with XP753. The FullPage hybrids RT7321 FP and RT7521 FP have shown excellent vigor and herbicide tolerance compared to previous Clearfield hybrids. Overall yields and milling are similar to the conventional hybrids previously mentioned. 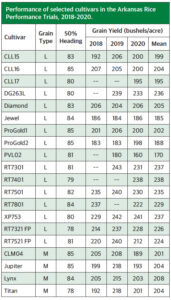 For medium-grain varieties, Jupiter still leads the pack in overall package. However, Titan and Lynx have advantages and should increase in acreage. Titan’s earlier maturity and equal to or greater yield potential make it a viable choice. Lynx, while not yet having full market approval, shows greater yields compared to Jupiter and Titan.

CLM04 is very competitive as a Clearfield medium-grain option and does often yield right alongside the conventional options but it can yield slightly less.

It bears repeating every year that it’s best to grow multiple cultivars to spread our risk. Maturity differences between cultivars are generally small, so it’s difficult to make many decisions based on that factor. However, considering that we plant so many acres in narrow windows and harvest takes much longer, choosing cultivars with some difference in maturity can have benefits at harvest.

Every year is its own animal, and 2020 was no different. Traditionally, the earlier we plant the better our yields. But in 2020, the mid planting window of late April and early May appeared to be the best.

Ultimately, earlier planting is still generally better, but we’ll only be able to work in the windows we’re given in 2021, the same as the past two years.

Please review Arkansas Rice Cultivar Testing data at http://www.uaex.edu/rice to help with your decisions. While the table included here provides performance averages, the testing results offer location-specific results to better reflect performance in your area and on your soils.