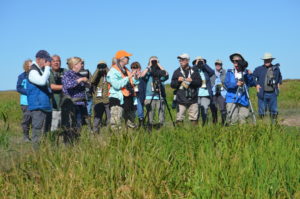 As they prepared to head out to a South Louisiana ratoon rice field, Kris and Eddie Farrey from The Villages, Florida, were anxious to cross two things off their bucket list.

“We were trying to find some new birds we hadn’t seen before, and the yellow rail was one of those,” says wife Kris.
“We’re excited about riding the combine,” chimes in husband Eddie. “I’ve never seen a rice field, so I’m excited about this.”

The Farreys were among 114 bird watchers from 22 states and three foreign countries who flocked to South Louisiana in early November with hopes of seeing a yellow rail, a non-descript small brown bird that frequents ratoon rice fields. And they weren’t disappointed.

During the very first combine pass, the three birders riding on the harvester got to see three yellow rails. Peg Clukey, one of 16 birders from the Buffalo (New York) Ornithological Society, was all smiles as she climbed off the harvester.

Asked which was better, the combine ride or seeing a yellow rail, she says, “I don’t know. They were equal — that was so exciting!”

Described as “one of the most secretive birds in North America” by experts, the robin-sized yellow rail lives in marshy underbrush and frequents the second rice crop. What makes it even more difficult to spot is the birds prefer to run or hide rather than fly unless under extreme pressure, such as caused by a combine.

And it’s the yellow rail’s shyness that draws in birders, many of whom want to mark it on their “life list” of species they’ve observed. 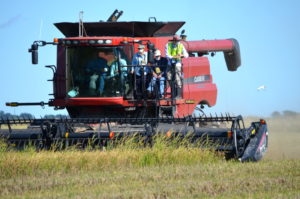 One of the highlights was a combine ride. As it cut rice, the machine flushed out birds, including the coveted yellow rail.

Now in its 10th year, the annual Yellow Rails & Rice Festival capitalizes on one of the holy grails of birdwatching while educating attendees about rice farms’ contributions to wildlife habitat and conservation.

Thornwell, Louisiana, rice producer Kevin Berken, one of the event founders, times his ratoon harvest so the mostly urban bird watchers can experience a combine ride and see the rails as they flush.

Before participants — many of whom have never been on a working farm — get to hop on his combine, Berken gives them a “Rice 101” lesson about the conservation measures rice producers use on their farms. He also discusses how rice fields offer habitat, not just to yellow rails but a myriad of wildlife species.

Berken says he hopes the birders leave with a better understanding of the importance of rice fields to wildlife.

“I didn’t realize this when we began, but it’s truly something good for the rice industry to have people from all over the country and all over the world come here to see how valuable rice is to wildlife,” he says. “So I always tell them up front, rice provides more habitat for wildlife than any other crop.”

He admits they typically buy imported rice. But after touring the nearby Falcon Rice Mill and listening to Berken, the Kellers took samples of Toro, Jazzman II and Louisiana long-grain back to conduct their own taste test.

When the event started 10 years ago, Berken says he never thought it would become as popular as it is today.

“It’s been such a blessing and wonderful opportunity to talk about rice, because most people don’t know rice is grown in the United States and that there’s an alternative to Thai jasmine,” he says. “Many of them will come away with a greater appreciation for what we do.

“I want to make sure the birders and the environmentalists know we’re not the bad guys. There’s a misperception that we’re not taking care of what the good Lord has given us. I want to show them how very responsible we’re with our natural resources.”

“Through sound conservation practices, these fields still sustainably produce the food, fiber, fuel and forest products that support our communities and feed our families and the world,” he says. “The benefits extend well beyond food production to the contribution of our private agriculture lands to the abundant clean water and wildlife habitat.

“In particular, our working rice fields provide food for millions of resident and migratory birds. Whether it is the sight of yellow rails flying during rice harvest or the rise of ducks off flooded fields on a cold winter morning — farmers, our private land stewards, do more than sow and harvest.” 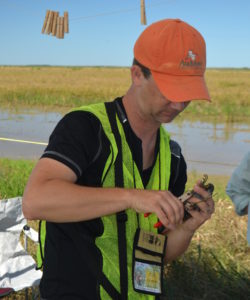 The event is the brainchild of Berken and his wife, Shirley, along with Donna Dittmann and Steven Cardiff, collection managers with the Louisiana State University Museum of Natural Science in Baton Rouge.

Berken first met Dittmann and Cardiff when they were bird watching by his fields as he cut a ratoon crop more than 10 years ago. Dittmann says she and Cardiff discovered in the mid-’80s that watching combines during the ratoon harvest was a reliable way to see yellow and other rail species. From there, Dittmann, Cardiff and the Berkens became friends and started talking about how they could mix rice farming and birding.

“We just joked about starting a festival around the bird and the whole harvest,” Dittmann says.

What really kick-started the idea was a state statute adopted several years ago that limited liability for certified agri-tourism events, such as Yellow Rails & Rice.

The group focused on the yellow rail because “it was a bird that was charismatic for bird watchers so it was a lure, and Louisiana doesn’t have any other type of (avian) lure like that,” Dittmann says. “It shares other bird fauna with other southeastern states like Texas or Florida.

Over the years, the festival has evolved; however, the focus remains seeing yellow rails during harvest. Four days of activities also include netting and banding workshops, combine rides, rice mill tours and bird watching in nearby natural areas. On two nights, participants are treated to Cajun cuisine that includes jambalaya or etouffee — and, of course, rice.

Event organizers have focused on activities around Jeff Davis Parish because of the region’s wide array of offerings and the abundance of yellow rails. In fact, the Louisiana Legislature in 2014 proclaimed the community of Thornwell where Berken farms as the “Yellow Rail Capital of the World.”

Organizers also capped the event at slightly more than 100 so most participants have an opportunity to ride the combine and see yellow rails, Dittmann says.

With very little advertising, the festival has gained a following among bird watchers simply from word of mouth, and it typically sells out each year.

And much like farming, organizers’ efforts are at the mercy of weather and mechanical break-downs. Two years ago, for example, Berken’s combine malfunctioned, but neighbor Paul Johnson came to the rescue and offered up use of his harvester.

This year, the opening day was rained out, but the weather was clear and sunny for the remainder of the festival.

Rain is always a concern because it halts harvest. And if it floods fields, yellow rails don’t like wet feet, Berken says. This year, participants saw more sora rails than yellow rails, which wasn’t surprising because it is usually more numerous and the fall was rainy, he says.

Nevertheless, attendees still logged more than 50 yellow rails, not to mention a plethora of other bird species, many of which also were on their life lists.