What makes the best gumbo? Some say the Cajun trinity of ingredients —onions, bell pepper and celery. Many argue the roux is the basic building block for creating the ultimate gumbo. But everyone agrees that the best gumbo is one that uses a combination of ingredients that, with time and careful attention, achieves the quintessential cool weather staple of the South.

In the world of natural resources, partnerships are the roux in the recipe for a successful conservation gumbo.

In the rice fields of southwest Louisiana near Kinder, the Unkel family farm is cooking up some of the best conservation gumbo around. Eric Unkel is one-third of a big family farm.

“I’m the third generation … Our family has been farming this land since the early 1920s,” he says. The fourth generation, Eric’s nephew, Aaron, is following in his family’s footsteps and farming alongside both of his uncles. Unkel’s portion of the farm consists of 3,600 acres of rice and crawfish, with some cattle on the side.

The base of this conservation gumbo began in the early 2000s when the price of fuel skyrocketed.

“That was one of the biggest motivators; we were looking for ways to become more energy efficient and more conservation minded,” Unkel says. “Our relationship with the Natural Resources Conservation Service and the Allen Soil and Water Conservation District began with laser leveling a few rice fields at a time.”

The process of precision land leveling reduces the amount of water and the time it takes to flood fields.

“We could see the difference it was making by lowering energy costs and reducing soil erosion, so we kept adding field after field. Right now about 90% of our fields are precision leveled,” he says.

Unkel recalls the work completed on his farm with the technical expertise and financial assistance of NRCS through the Environmental Quality Incentives Program. “We are so much more efficient now; through land leveling, we have gotten rid of over 100 levees, not to mention the grade stabilization structures and irrigation pipeline installed.”

Between the Regional Conservation Partnership Program and EQIP, he says he’s installed about 50 pipe drops. Those are on top of another 50 he had installed previously through state cost-share programs.

Unkel also installed more than 2 miles of pipe under EQIP and RCPP in addition to the existing 2 miles he put in under earlier state programs.

Barrett Lyons, district conservationist for the NRCS Oberlin Field Office, agrees with Unkel about the improvements that have been made.

“We started working together originally to increase efficiency, and over the years, we have addressed more resource concerns including nutrient and pest management.” Lyons says. “So in addition to improved land conservation, the Unkels have better farm management and ultimately increased financial stability.”

“NRCS has worked to streamline the application process, and this will allow greater flexibility for conservation partners across the state.”

One of the most significant contributions to their farm is being made through a partnership between Ducks Unlimited, USA Rice, SWCDs and NRCS in the Regional Conservation Partnership Program.

“Through RCPP, we promote coordination between conservation partners to implement projects that demonstrate innovative solutions to conservation challenges and result in positive outcomes tied to the resource concerns they are addressing,” Edwards says.

For Unkel, the RCPP is providing the technical expertise and financial assistance to install several ditch pumps, which will create a tail-water system.

“We will be able to recycle the water coming off the fields back into the fields. We are getting a lot more use out of the water we are using,” he says.

Kyle Soileau, Ducks Unlimited rice stewardship coordinator for Louisiana, says he is pleased with the work on Unkel’s land.

“What Eric is doing with his land is exactly what we are trying to achieve with RCPP,” he says. “There are two parts to RCPP.

The first is through EQIP when farmers like Eric make the switch from using groundwater to surface water to decrease pressure on aquifers.”

On the Unkel farm, the project provided cost-share on two 50-horsepower pumps, which are in the process of being installed, and pipe.

The second part of RCPP is the Conservation Stewardship Program that includes providing habitat for migrating waterfowl by extending the time water is held on agricultural lands. After harvest, growers are asked to put boards in their field to catch winter rains.

“There is always a winter water holding component in the fields that provide habitat for ducks migrating south and provide healthy habitat when they are on their way back north in the spring,” Soileau says.

A win for farmers and the environment

The partnership between DU, USA Rice, NRCS and the Allen SWCD through RCPP has assisted the Unkel farm in becoming more efficient. But the improvements are more than just financial savings. 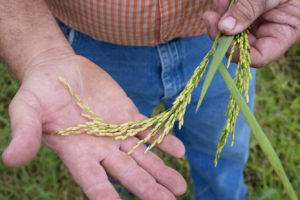 “When you pump muddy water onto the rice fields, rice does a tremendous job of cleaning and filtering out all of the sediment, suspended soils and turbidity,” he says.

“All the water sampling we’ve done comparing the muddy water going into the fields versus when it is released show an 83% reduction in suspended solids and about a 94% reduction in turbidity.”

Kane Webb, director of field services for USA Rice, says he is encouraged by the conservation work being done by Unkel and other Louisiana producers.

“These growers really do care about the land and the stewardship aspect of agriculture while producing a high quality product that consumers can trust and want to use,” he says. “These producers are also making their operations more efficient and leaving a legacy for the next generation of farmers.”

Soileau echoes Webb’s sentiments. “The partnership that DU has with NRCS, USA Rice, local SWCDs and grower organizations allows us to examine resource concerns from many different angles and then come up with the best solutions; every organization brings a different perspective to the table. Partnerships … that’s how you get great conservation work accomplished.”

Amy Robertson Fuselier is Louisiana state public affairs specialist with the Natural Resources Conservation Service in Alexandria, Louisiana. She may be reached at Amy.robertson@la.usda.gov.