Despite the drought and a localized armyworm infestation, this season produced some very strong yields. 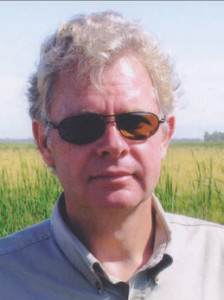 An overview of the 2015 rice-growing season in California would not be complete without mention of the ongoing drought. Statewide, the last rainy season (October 2014 through April 2015) brought only a small fraction of the state’s average precipitation; snow pack in the mountains was virtually non-existent.

The impact on agriculture has been severe. Growers in the Sacramento Valley fared better than those in the southern part of the state where allotments were reduced to zero in some instances. The majority of the irrigation districts that serve rice growers received between 50 and 75 percent of their typical allotment from state and federal sources.

Many new wells were installed and old ones refurbished to at least partially make up for the irrigation water shortfall. Water limitations resulted in fewer acres of rice being planted compared to previous years. In 2013, for example, there were more than 550,000 acres of rice planted in California. In 2014 there were about 425,000 acres, and in 2015 the planted acres of rice were further reduced to about 375,000.

Another dry winter will likely reduce rice acreage further. Whether El Niño brings relief from the drought remains a hopeful promise at this point.

Armyworms were an exception 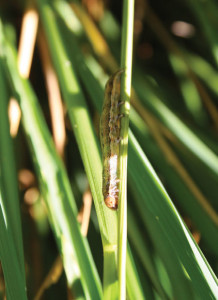 A rare infestation of armyworms in parts of the northern Sacramento Valley devoured rice stands down to the mid-vein in portions of many fields. Tens of thousands
of acres were treated.

Water aside, this past season was a good one. The dry, warm spring resulted in early field preparation and planting. The exceptionally dry soil profile required a surprisingly large volume of water to establish a flood for planting.

Aside from the typical struggles with weed control, the season was without much pest pressure with the notable exception of an area in the northern valley. In that area, an armyworm outbreak was severe.

The worms devoured rice stands down to the mid-vein in large portions of many fields beginning in mid-June. This level of armyworm pressure is extremely rare. Tens of thousands of acres were treated.

However, commonly used pyrethroid insecticides did not provide good control and neither did carbaryl applications. Most likely, these products failed to provide good control because of the very high populations. A coalition of grower organizations, university and industry managed to obtain a Section 18 for Intrepid 2F in time for the second population outbreak in August – the time when armyworm pressure typically occurs.

The 2015 crop matured a few days earlier than the long-term average, with harvest beginning in early September. Yields in many areas were strong, excluding heavily worm-damaged fields where yields were reduced by as much as 15 percent.

Documented yields have been as high as 130 hundredweight per acre (dry weight), which is just short of amazing. The statewide average is expected to come in around 85 cwt. Early returns on milling quality for many are in the 65/70 range (head and total). In contrast, there were reports that rice harvested early at a high moisture content and rushed through the drying and milling process in an effort to capitalize on the “new crop” market suffered from low milling quality.