Direct-farmer marketing pays off with a rough rice shipment to Mexico.

If we begin with the premise that rice producers today have lost most of the assistance they used to receive from Washington, then marketing their harvests takes on an even greater importance. Pricing the crop is pretty much it; there are not a lot of chances to make money past that point of sale.

Despite grower protests (“I only grow the stuff”), marketing has always been important. It has led to the formation of cooperatives, pools, growing contracts and farmers building processing plants — a wide variety of methods to optimize return on land and labor.

The parallel dream of selling direct to buyers has been a largely unattainable goal for decades. Selling rice at the farmers’ market only works if it is a short drive from the farm. Selling rice in any form for export takes specialized knowledge and a lot of money.

But the world changed in 2010. A very hot summer caused much of the rice crop to have distinctly low quality and milling yield. The largest export buyers of U.S. rice are Mexico and the Central American Free Trade Agreement countries.

They tend to buy rough rice for processing in their own mills since they can’t grow enough at home. 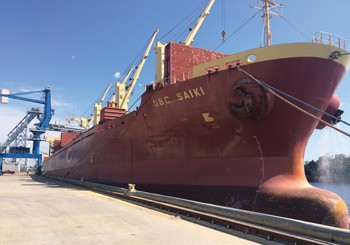 The MV UBC Saiki loads with 20,000 tons of rough rice from the port of Lake Charles, La., for shipment to Mexico.

So those mills — intentionally or not — started receiving the low-quality rice from the 2010 harvest. It took a while, but they started to complain. As a result, several countries turned to rough rice from Brazil or milled rice from Vietnam or Uruguay, threatening the nearly 100 percent market share enjoyed by the United States.

This story should be familiar to everyone in the rice business. Attempts were made to offer identity preserved rough rice to our customers, but nothing worked smoothly because the “old” system resulted in the lowest cost.

Purely by accident, the Louisiana Independent Rice Producers Association made a deal to use a failed facility in Lacassine that had been financed by the Louisiana Department of Agriculture.

Selling shares and raising money from sources including hurricane recovery, LIRPA built a modern rail-loading facility. Buyers in Mexico envisioned the new facility as the source of the kind of rice they wanted to buy, and slowly the tonnage put through the facility benefited farmers. Proving that they could originate and ship rice of the same variety, the farmer group was in a position to take advantage of another anomaly.

A New York group decided to build a grain export elevator at the port of Lake Charles. This would be the first new export facility built in many years, and at first rice was not included in the list of products to be handled at the elevator.

Working with contacts the group had made marketing the rail facility in Mexico, it was determined that loading a full vessel from the new elevator was doable. To make a long story short, the MV UBC Saiki sailed on Oct. 5 bound for Veracruz loaded with 20,000 tons of rough rice for the largest mill in Mexico.

The 41 growers who provided the rough rice for this sale received prices about 10 percent above the bid level prior to the sale announcement. There is no guarantee that this business will be repeated or grow, but so far both buyers and sellers are very pleased.

The high quality rice that was shipped was exactly what the buyer had been trying to purchase, freight costs were lower from Lake Charles than from New Orleans, and the price was better than the market had been willing to pay. Direct-farmer marketing was, in fact, the “dream come true.”

The mere presence of farmers’ access to an alternate facility to export either by rail or sea influences the market.