A weed control ace in the hole

RiceTec and Adama partner on limited launch of the Max-Ace herbicide-tolerant rice system.

The introduction marks another milestone for Alvin, Texas-based RiceTec — it will include a hybrid for which the company is known as well as a variety.

The two companies plan to have 40 to 50 farm-scale demonstrations throughout the South and Mid-South this season showcasing the new production system. They will be split between the Max-Ace hybrid and variety.

RiceTec and Adama also plan to hold field tours so growers can learn first-hand about the production system. Using traditional techniques, RiceTec has developed Max-Ace cultivars that are tolerant to over-the-top applications of quizalofop herbicide.

The Environmental Protection Agency granted the herbicide a full Section 3 registration in February, and it is labeled for use only on Max-Ace rice. Highcard is not registered for use in California.

RiceTec is awaiting Canadian approval of the Max-Ace non-GMO herbicide tolerance trait. As a result, harvests from the demonstration fields will be identity preserved and channeled accordingly.

RT7331 MA is a Max-Ace hybrid with comparable yield and plant characteristics to XP753, said Leandro Pasqualli, RiceTec marketing manager. It also has the strong disease package of other RiceTec hybrids.

RTv7231 MA is a Max-Ace variety that is four to five days earlier in maturity than RT7331 MA or XP753. RTv7231 MA has blast resistance and comparable production to the highest yielding varieties on the market.

“The Max-Ace Rice Cropping Solution is in high demand for its outstanding grass weed control with Highcard herbicide in rice, and RiceTec is doing all that we can to provide seed for our growers,” Pasqualli said. “Max-Ace will give an additional herbicide rotation partner to steward weed resistance in herbicide tolerant rice solutions.” 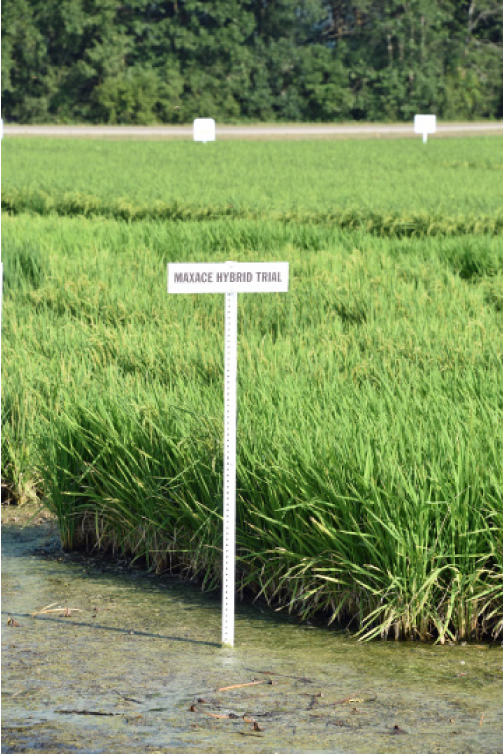 With the early maturity of RTv7231 MA, it will be important to ensure harvesting at the optimal 18% to 20% grain moisture, which could be easily overlooked, he said.

Regardless of the rice type grown, Feist said it’s always best to start clean and stay clean by applying a preplant residual herbicide, such as clomazone or pendimethalin.

Because Highcard is a grass herbicide, he said growers will need to incorporate broadleaf products into their weed control program.

“We don’t want the red rice to escape and cross pollinate with the crop,” he said. The label also restricts use to two applications spaced at least 10 days apart. As part of weed resistance management, Feist recommended against cutting

Highcard rates, noting Max-Ace rice can withstand the higher labeled rates without crop response because of its strong genetic tolerance.

The first Highcard application should be made when the rice is at the two- to three-leaf stage, with a second application made at least 10 days later and before panicle initiation. The actual timing depends on weed pressure.

For best results, applications should be made on warm, sunny days when both the rice and weeds are actively growing.

And weather for the preceding days is much more important than for the following days, Feist said. Application during cloudy or overcast days should be avoided when possible.

Because Highcard does not carry over in the soil, growers are able to plant non-ACCase-tolerant rice varieties or hybrids the following year.

Adama researchers continue to test the tankmix compatibility of Highcard and broadleaf herbicides. So far, quinclorac and Loyant appear to be suitable tankmix partners, he said.

“I think we’re going to see a lot of quinclorac-type mixes be very popular. It’s going to have a good fit,” Feist said. “The others we’re still exploring. They’re not perfect mix partners, let’s put it that way.”

Among the more antagonistic are phenoxies, which are rarely used on rice any more, and propanil, he said.

In the past, labels for Preface and Postscript — Adama’s imidazolinone herbicides labeled exclusively for use on FullPage rice — contained 18-month plant-back restrictions for non-IMI rice cultivars. Concerns about herbicide carryover in the soil prompted the warning. But research has found the Postscript formulation does not pose the same risk.

With the new label language, growers who use Postscript for both applications on FullPage rice one season can plant a non-IMI rice the following year. The label for Preface, which contains the active ingredient imazethapyr, still carries the 18-month plant-back restrictions for non-IMI rice.