A Work in Progress

Be proactive in controlling resistant weeds

When weed resistance in rice first appeared, it soon became clear that a silver bullet herbicide program was not magically going to materialize to solve the problem. Everyone involved with weeds in the rice industry went to work to come up with programs to fit most resistance issues.

However, even though these programs have been successful in many cases, there is no guarantee that a particular approach will last. Resistant weeds can be tricky. They can often find a way around even the best of plans. For that reason, weed scientists are continuously looking ahead for the next approach to replace or complement the ones that are already in place. Controlling resistant weeds in rice is truly a work in progress.

In Louisiana, LSU AgCenter weed scientist Dr. Eric Webster says barnyardgrass resistance to Newpath has been confirmed in St. Landry Parish. Several years ago, sprangletop was found to be resistant to Clincher in Avoyelles Parish, and, in some cases, rice flatsedge refused to be taken out by Permit.

In addition to these scenarios, Webster says rice growers also are dealing with red rice outcrosses in the Clearfield technology and the appearance of F2 hybrids in newly planted FI hybrid fields. “What happens with the hybrids is that they have some shattering characteristics like red rice does,”

Webster says. “For example, if a farmer plants Clearfield XL745, that’s an F1. If it shatters, the seed will go to the soil. When the hybrid comes back that second year, it can take on several different morphologies. It can be tall, short, light green. When looking at it from a distance it looks like red rice. But it’s not. It’s actually white rice that is in the parentage of one of those hybrids. The F2s that come back may or may not be resistant to Newpath, depending on how the crosses went and what the segregation did.” Webster says he calls fields with this type of issue “weedy rice.”

They could be a red rice outcross with one of the Clearfield lines, an outcross with a hybrid or a dormancy issue with the hybrid. This means that there are three different situations, which may or may not be red rice.

“We’ve done some long-term rotation studies, and it looks like a three- or four-year rotation with fallow, soybeans or some other crop is the best approach to deter resistance,” Webster says. “In soybeans, we are recommending Outlook or Dual Magnum that is persistent in the soil at least one year in the rotation. Plus, spraying Roundup or Liberty, depending on your program, will help.

“If a farmer chooses to fallow a field, we recommend spraying with Roundup or Liberty as well as using tillage in the system,” he adds. “You can’t just fallow a field and walk away. You have to have an aggressive herbicide/tillage program in that fallow year as well.”

Webster also recommends using multiple modes of action (MOAs) in your herbicide program. Being proactive with herbicide selection (multiple MOAs) can prevent the resistance issue from ever occurring on a farm, he says. And if there is an isolated area of the field where weeds appear to be resistant, consider roguing or taking out some rice to keep the resistant weeds from spreading.

“Rice growers should try to have at least two MOAs going out on barnyardgrass – a postemergence and a residual,” Bond says. “It’s worth it. Always take a systems approach when faced with weed resistance. The take-home message? Don’t wait. Spray early and often!” 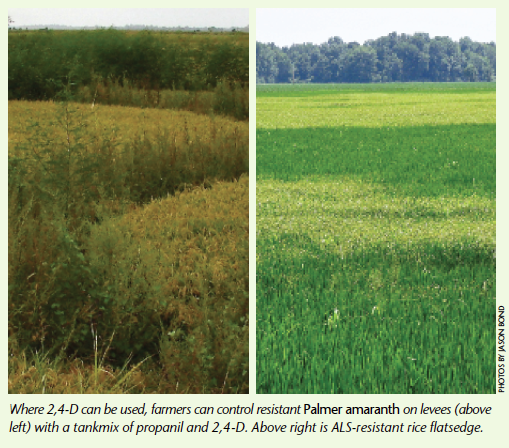 Palmer amaranth that is resistant to glyphosate or ALS inhibitors can be seen on rice levees in Mississippi more often than in fields, says Jason Bond, research/Extension weed scientist with Mississippi State University. If Palmer amaranth does come up in the field, it typically dies in the water. Once this weed is established on the levees, the plants usually get too large to control, he explains.

“The real downside is that these Palmer amaranth plants are making seed that eventually drop into the field and become a problem when the field rotates back to soybeans. “Populations of glyphosate-resistant Palmer amaranth build up in soybeans, then have to be addressed in rice the next year,” Bond says. “The biggest problem with glyphosate in rice is off-target movement or drift onto rice fields in-season when nearby soybeans fields are being sprayed. “Several years ago, if we encountered a drift problem, we were reasonably sure that it was glyphosate and knew what symptoms to look for in rice. Today, as more residuals are going out with paraquat, it’s difficult to determine which herbicide may be causing the injury.”

Although the biggest resistant weed problem in Mississippi rice is barnyardgrass and resistant Palmer amaranth has been seen on levees, fields with ALS-resistant rice flatsedge have shown up in two or three counties where there is zero-grade, continuous rice.