Be prepared to adjust herbicides and application timings 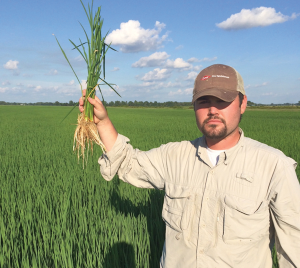 Johnathon Morris, an Arkansas consultant, felt the changes of the season. Like many, he had to alter herbicide choices and application timings.

With weather pushing planting dates later into the season, Morris managed an inconsistent range of rice growth stages. As the season progressed and preemergence herbicides began to break, he adjusted his herbicide recommendations to reflect the larger and denser weed populations. “

Our primary issues are barnyardgrass and sprangletop,” he says.

“We have a serious problem with Palmer pigweed. Although it is easier to control in rice, it can be a problem when there is heavy weed pressure.”

“We’ve had a lot of success with Grasp Xtra herbicide, and we use Grandstand herbicide on well over 50 percent of our acres due to pigweed, morningglory and other broadleaf weeds,” Morris says.

Due to environmental delays, one grower Morris helps was unable to plant into a clean, weed-free seedbed. During planting, emerged barnyardgrass was injured and caused later complications.

“The planter injured the grass, which stopped its growth for a short amount of time. It shut down during this time and did not take in the preemergence application of glyphosate,” Morris says.

“Because of this, we had very large barnyardgrass pre-flood, but Grasp Xtra cleaned it up nicely,” he adds.

As the season progressed, the Arkansas consultant had to consider what was not only best for his growers’ rice acres, but also surrounding crops, such as soybean adjacent to late-planted rice.

“We had to adjust our recommendations because soybeans are very sensitive to a lot of the herbicides,” Morris says. “Soybeans are sensitive to propanil, so we use Clincher herbicide in many situations.”

Although the 2014 season came with its share of challenges, the end result was a quality rice crop, Morris notes.

“Quality is why rice is so important here,” he says. “Some of the best-quality rice in the world comes out of the area.”

– Applied Grasp Xtra to clean up barnyardgrass that was injured during planting.

Bader-Rutter contributed this article on behalf of Dow AgroSciences.